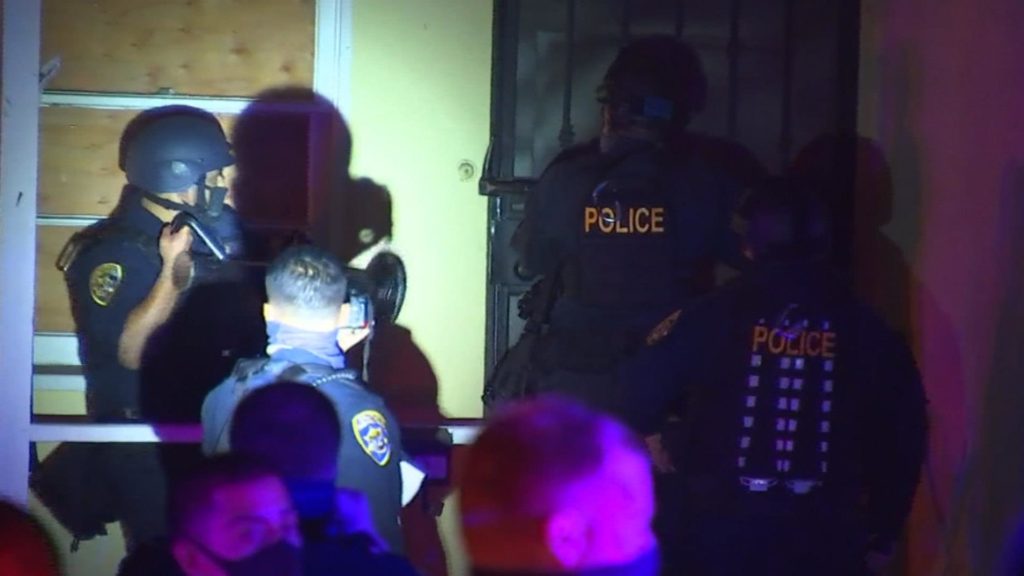 The mythical version of the origin of Thanksgiving is about sharing, gratitude and family.

In reality, Thanksgiving began with the colonization and genocide of indigenous people.

This Thanksgiving in L.A., the brutal legacy of eviction — of forced displacement — was revived as California highway patrol forcibly evicted families from over two dozen empty, state-owned homes. Police in riot gear (who were not wearing masks) cleared out housing rights protesters who were attempting to protect the families from eviction. The doors to the homes were rammed down as the cops violently evicted the people inside. The families who were evicted included children as young as 3 months old and seniors as old as 70. 62 people were arrested between Wednesday and Thursday as the cops cleared out the buildings.

These families have tried everything,” said Iris De Anza from Reclaim and Rebuild Our Community. She is a freelance artist and mother of three who was recently living in her car. “We’ve tried to work with the city. This became a last ditch effort to take back these empty homes. It’s a crime to have houses sitting empty, when so many people are out on the streets.”

Here is @CHPsouthern, without masks, evicting a family on midnight after Thankstaking. This is the priority our law works under: property over people. The silence from @GavinNewsom @MayorOfLA only confirms that. #HousingForAll #novacancyCA #LandBack pic.twitter.com/G0c6x57vgN

As 50 police vehicles pulled up to the occupied homes, Caltrans representatives said that the cops were there to “resecure” homes which were unfit for habitation. As over 70,000 people go without stable housing in L.A. County alone, these homes had been lying vacant for years before the group “Reclaiming Our Homes” began occupying them in March. Inspired by the Oakland-based movement Moms 4 Housing, the group’s intent is to give unhoused families homes in which to shelter in place in the midst of the Covid-19 crisis. In this case, over 20 families moved into houses owned by the California Department of Transportation (Caltrans).

Housing activists wrote the following to Los Angeles governor, Gavin Newson who recently issued a stay at home order in response to resurgent Covid-19 cases in the area.

We, people of color, are certainly facing ‘The Darkest Winter’ not only because COVID-19 is again spiking, but because for us, the economic crisis has worsened and the tsunami of evictions is dwarfing the already minuscule number of available affordable housing statewide.

As you said, we are safer if we have the ability to self-quarantine and safely isolate in a home. We therefore ask that you, as Governor, direct Caltrans to allow the new families to immediately turn on all their utilities: heating and running water and electricity are essential to shelter safely in place.

Claudia Lara, a member of Reclaim and Rebuild Our Community, told the LA Times, “To do this during the holidays, it is inhumane. It’s really irresponsible… Housing is a human right, and all families deserve to have safe shelter, especially during the global pandemic.”