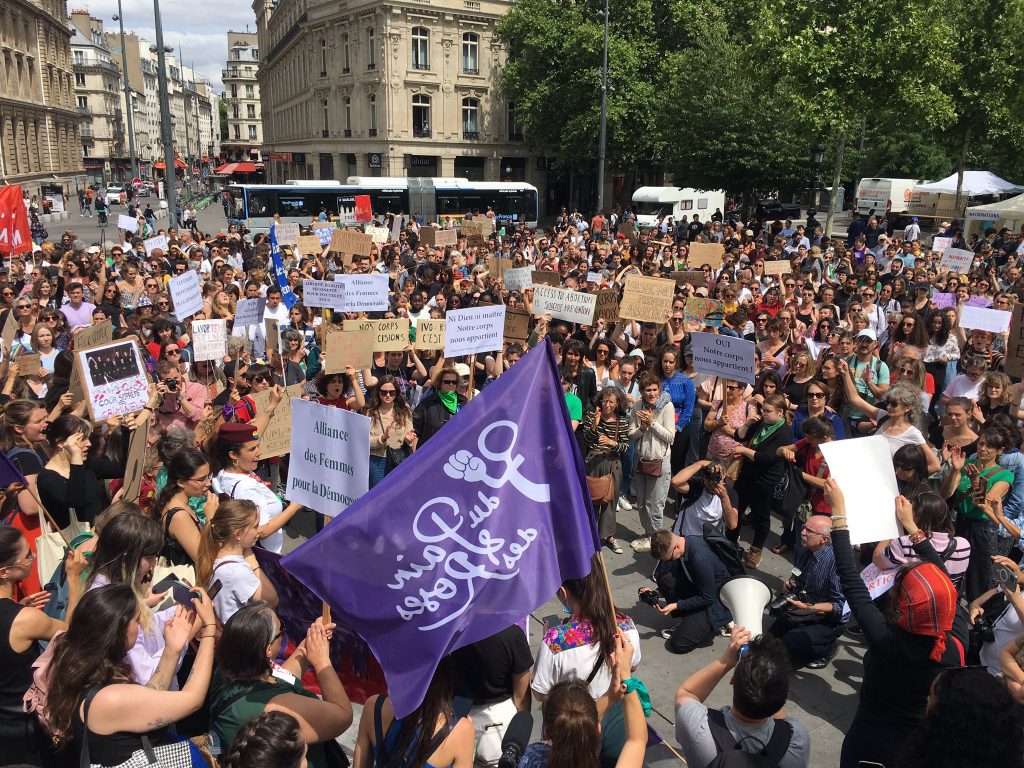 In the wake of the Supreme Court’s decision to overturn Roe v. Wade and revoke the constitutional right to an abortion, socialists and feminist activists across the world are showing their solidarity for the hundreds of millions of people in the United States who have just suffered one of the most significant institutional attacks on their bodily autonomy in decades.

On June 27, dozens of protesters gathered in front of the U.S. Embassy in Buenos Aires, Argentina to repudiate the Supreme Court’s reactionary ruling. The protest was called by La Campaña Nacional por el Derecho al Aborto (National Campaign for the Right to Abortion), feminist organizations, and socialist organizations. The same groups who led the marea verde (green wave) that won the right to an abortion in Argentina in 2020 are now standing in solidarity with our struggle for reproductive rights.

The protesters chanted “Legal abortion, worldwide” and “my body, my choice” as they stood in defiance in front of the embassy, and donned the green bandanas that have become the international symbol for the fight for the right to an abortion. Facing down the police who constantly stand guard in front of the embassy, a representative from the National Campaign read a statement that said the movement is on alert and ready to mobilize, and expressed solidarity with the demonstrators taking the streets in cities across the United States.

Prominent figures from the Argentinian feminist movement attended the demonstration, including Martha Rosenberg, Nina Brugo, Elsa Schwartzman, Nelly Minyersky, and others. The socialist feminist group Pan y Rosas — the sister organization of a new group, Bread & Roses, in the United States — took up the call to support their comrades in the United States at the demonstration at the embassy, showing us the type of movement and international solidarity that will be necessary to win the right to free, safe, legal abortion on demand.

The call was made by feminist and queer collectives, including our comrades from Du Pain et des Roses — also part of the Pan y Rosas international network of socialist feminist organizations. Protesters called for an end to the undemocratic Supreme Court. The organizers of the protest spoke on the importance of an international fight for abortion rights, independent of all capitalist parties and politicians, that takes the street to fight for reproductive rights, against misogyny, and for the rights of all oppressed people — which are constantly under threat in a capitalist system.

The protest was called as President Emmanuel Macron — whose government faces a crisis of legitimacy after years of social unrest — announced his government’s intention to make abortion a constitutional right in France, after years of vacillation on the subject. The feminists at the march pointed to the United States as an example that this is not enough: we must demand free, safe, legal abortion on demand and accessible to all. Their protest shows that the fight for reproductive rights is international, one that will be won in the streets by the coordinated efforts of activists, students, and the entire working class.