Fired Starbucks Workers Bring their Fight Directly to the CEO

Despite being illegally terminated, Starbucks workers from Memphis, Tennessee and other cities across the country are fighting to unionize and win back their jobs. 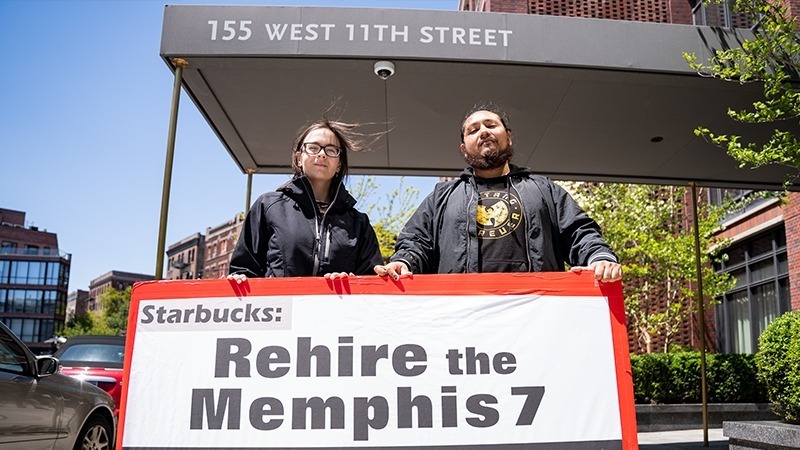 On Friday afternoon two fired Starbucks workers, Beto Sanchez and Lakota McGlawn, joined activists for a rally and press conference in front of the posh Greenwich Village penthouse of Starbucks CEO and founder Howard Schultz. The speakers — who were fired in February for attempting to organize their Starbucks store in Memphis, Tennessee — are demanding that they and their fellow workers immediately be reinstated, and that Starbucks end its union busting tactics.

Sanchez and McGlawn are two of the seven workers, known as the “Memphis Seven,” who were fired by Starbucks in February, just weeks after they announced their plans to form a union there. In a blatantly illegal move, the company terminated the workers (about a third of the entire staff) for supposedly violating company policy after they met with reporters in the store to talk about unionization efforts. But almost all of the workers who were fired were involved in organizing for the union, and it is clear that the terminations were a direct act of retaliation designed to crush these workers’ efforts to form a union and put an end to the unionization wave spreading throughout the company. The National Labor Relations Board has called the firings illegal, and has already filed complaints against the company.

As Sanchez explained at a rally in Memphis shortly after he was fired:

“As soon as they heard about our campaign launching, they’ve been spending time closing our cafes, stopping sit-ins, and doing anything they can to try to stop us instead of actually supporting us.”

And indeed, these workers are not the first or only Starbucks employees to be fired for trying to organize their union. As Vice reported, “at least 18 pro-union Starbucks employees have been terminated since February.” In Arizona, Laila Dalton was fired after she began organizing for a union there, and other employees who supported the union had their hours reduced. In Raleigh, North Carolina, another union organizer was fired for breaking a sink. And in New York state, Angel Krempa was fired for being late after successfully organizing a Starbucks location in Depew.

The press conference took place in front of the New York City pied-à-terre of the notoriously anti-union Starbucks CEO Howard Schultz. Schultz has recently returned from retirement in order to combat the wave of unionization taking place at Starbucks stores across the country. As of today, 41 stores have already been unionized by Starbucks Workers United, and the National Labor Relations Board has received no less than 233 requests to hold votes at other stores. In response, Schultz, who has a net worth of more than $4.3 billion, has claimed that Starbucks is “under assault from unionization” and called unions an “an outside force that is trying to disrupt the future of our company.”

Thankfully, Schultz’s efforts to stop the unionization efforts at Starbucks do not seem to be stopping Generation U, as more and more Starbucks stores are unionizing almost every day. In fact, on the very same day as the rally, just blocks away from the site of the press conference, workers at the Astor Place store announced that they had voted overwhelmingly to join the union.

The fighting spirit of the Memphis Seven is evidence of the increasing militancy of young workers across the United States who are fed up with decades of increasing precarity, low wages, and shitty working conditions. They know that the only way to win a decent wage and protect themselves against arbitrary termination is by organizing with their fellow workers to take back control of their labor and their workplaces. Left Voice stands in solidarity with these workers and with Starbucks workers everywhere.