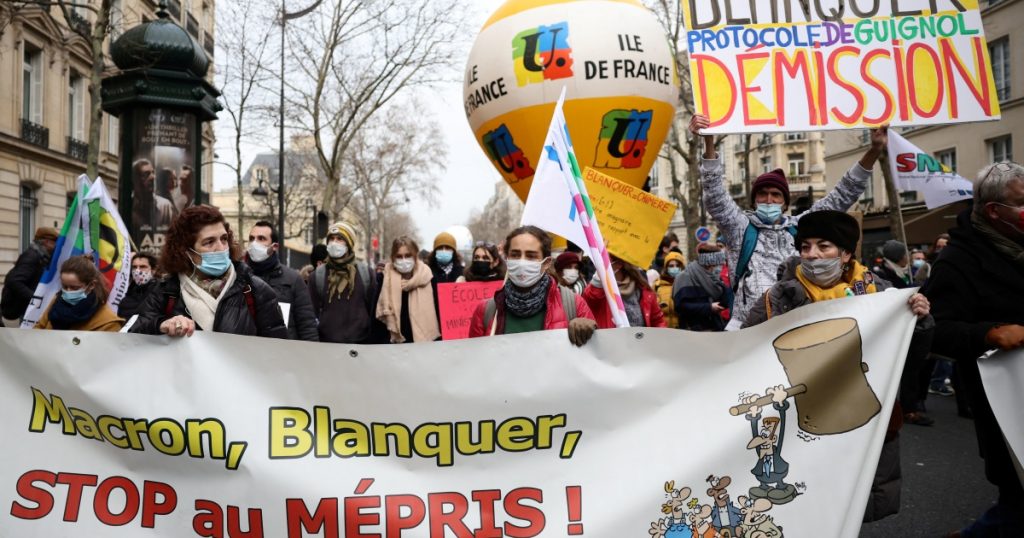 Since the beginning of the new school year on January 2, anger has been growing in the education sector, with walkouts, mobilizations, and the filing of strike warning notices multiplying everywhere. In Provins (Seine-et-Marne), administrators already decided to close a cluster of schools after intense pressure from and mobilizations by teachers and parents. In Seine-Saint-Denis, staff from several schools met in an inter-school general assembly last week to plan an ongoing struggle. Tuesday, January 11 was an initial test of the education sector mobilization, alongside the call for a strike in the health sector. On Thursday, January 13, it was teachers and education staff who took to the streets en masse, along with parents and students — the biggest such mobilizations since 2003.

There were demonstrations throughout France, and rallies in front of the rectorates (boards of education). The percentage of education workers who went out set records everywhere: 62 percent of teachers and staff in high schools; 81 percent in middle schools; and 75 percent in primary schools, according to the FSU, the leading union in the national education system. The next day, nearly 200 schools closed in Paris. This has all happened with the support of the FCPE (Federation of Parents Councils) and parents themselves, who are helping to organize the blockades and mobilizations — sometimes directly, as in Bobigny.

No one denies that this mobilization is historic. Whatever figures the Ministry of National Education may announce — and, as Le Monde has reported, the Ministry’s figures are quite inaccurate as it deliberately tries to undermine the true rate of participation — reality cannot be denied.

It was Minister of National Education Jean-Michel Blanquer spelling out the umpteenth Covid-19 protocol for schools in the Parisien newspaper, followed by a harsh correction by Prime Minister Jean Castex, that was the straw that broke the camel’s back — irritating teachers and parents alike, exhausted by two years of pandemic without any additional resources being deployed. The demands now go beyond FFP2 masks and CO2 sensors in classrooms to encompass more broadly the clear absence of resources for education overall. Unlike in Spain and Italy, there has been no additional hiring of education workers in France; in fact, jobs have been destroyed and workload has increased for the past several years. What was already unbearable — insufficient substitutes, understaffing of school life teams and cleaning staff, a huge uptick in the number of students in classes, and so on — has, for all school staff and students, become institutional abuse.

Crumbs to Try to Calm the Anger

All of this has the government quite worried. Massive demonstrations are rare in France just a few months before presidential elections. The component of the electorate comprised of teachers, which has leaned toward Macron’s LREM party, has been largely won over to the anti-Blanquer rhetoric. Parents are beginning to share their hatred of the minister who has turned their lives into a permanent Covid protocol: self-testing, long lines at pharmacies, having to budget for masks, and deep concern for their children’s health. In short, anger over the health situation in schools is igniting a large part of French society.

This pressure pushed the government to call a meeting on Thursday evening with trade unions in the education sector. It was a hasty decision made by Olivier Véran, the Minister of Health, along with Blanquer and Castex. After several hours of discussions, Castex and Blanquer announced pledges and promises (all still up in the air) aimed at dividing the educational community and getting high school students, teachers’ assistants, and first-graders back to school. Meanwhile, as new information comes out every day about the Omicron variant and just how contagious it is, Blanquer promised 5 million FFP2 masks, but mainly for kindergartens; other students and staff, especially in primary and secondary schools, will have to stick with surgical masks, huge quantities of which have been ordered. The government also promised to increase funding for local authorities to purchase air purifiers, once again pushing responsibility down to the municipal level.

After two years of the pandemic, these are very weak, limited commitments. As for the ubiquitous protocol, nothing changes, especially regarding self-testing and parental responsibility for contact tracing.

In response to the central (and historic) demand of teachers concerning new hires, Blanquer promised to bring on thousands of precarious workers: 3,300 contract workers; 1,500 teachers’ assistants; and administrative staff. This is an insult to the many education workers who work on short-term contracts for salaries below the minimum wage, while it avoids the question of investment in training and the hiring of permanent staff. It remains to be seen how many people who passed teacher qualification exams last year will be hired by Blanquer.

Continue the Mobilization and Extend It to Other Sectors

The long strike day — which began every early in the morning for those who went out, and ended at 11 pm for the government and trade union leaderships day — has shown that the action “paid off.” Still, the government’s declarations are quite limited compared to the magnitude of the situation facing the entire educational community. While the trade union leaderships declared that they were mostly “satisfied” and said they would play the game of fortnightly consultations promised by the minister — a way for the government to rely on “social dialogue” to rid itself of this political crisis as quickly as possible — it is necessary to demand something different: a battle plan to reinforce the relationship of forces and make the government pay, not only for its dismal record on health but also for its destruction of public services.

It is indeed a matter of “striking while the iron is hot,” as was heard on Thursday in the general assemblies called by strikers, to control the calendar, the demands, and the battle plan. This will require holding general assemblies in all the schools to open discussions about demands and to convince everyone to keep mobilizing — in particular, alongside the AEDs (teachers’ assistants) on January 20. It will especially require reaching out to other sectors, such as health and the rest of the working class, which like those in education need to organize to make the government pay for its policies and its mismanagement of the crisis. It is only together that the French educators will be able to get what has been demanded for months, and even years: a Covid-19 protocol that is really up to the task; enough new teachers and staff hired, with permanent contracts, to meet the real need in public education; cutting class size in half; wage increases to correct for 10 years of failure to keep up with inflation; the abolition of the Blanquer’s reforms to the entrance exams for schools; and a cancellation of evaluations for advancement that condemn students to social tracking in a context of two years of pandemic.

But more broadly, we must seek to build and demand from the trade union leaderships a battle plan for the entire working class, with a view in particular toward building the most massive interprofessional strike day possible on January 27. We have everything to gain by working towards this objective. For this, our demands must go beyond the simple management of the crisis in the schools. We must demand that public services no longer be sacrificed for the benefit of capitalist profits. We must demand massive resources, the hiring of personnel with permanent status, and wage increases for everyone in “front line” jobs that today are precarious and devalued. More broadly, at a moment when corporations are increasing their profits hand over fist, we must demand wage increases for all. Finally, it is urgent to impose an alternative health strategy to that of the government — one that is under the control of the workers and people, and no longer functions under the orders of the MEDEF employers’ association.

First published in French on January 14 in Révolution Permanente.