At the Total refinery in Grandpuits, France, workers renewed their militant action in a general assembly earlier this week. With numerous supporters present from throughout France, the meeting was a reminder of the “Grandpuits method”: self-organization, the strike, and a refusal to give in on jobs. 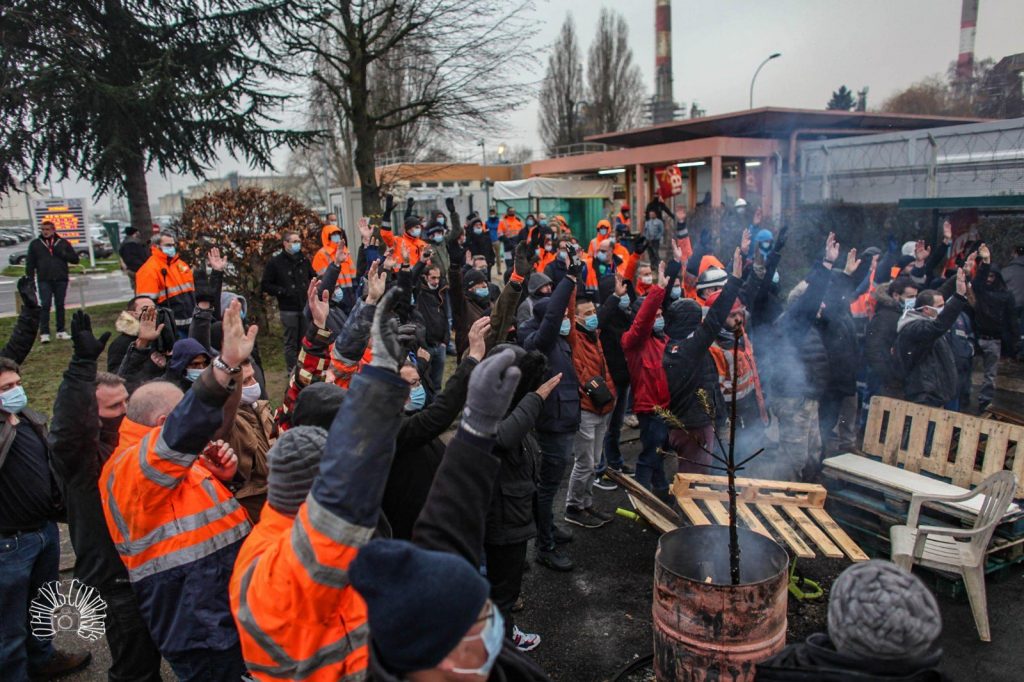 On strike already for nearly three weeks against the French multinational oil and gas conglomerate Total, which has threatened to eliminate 700 jobs by closing Grandpuits refinery in northwest France for a “green conversion,” workers met once again in a general assembly on Wednesday, January 20. (For background on the origins of the Grandpuits strike, see here.) At the meeting’s end, they had renewed the strike and strengthened their movement. Throughout their discussion, the workers and their supporters insisted on the importance of continuing to build their power through struggle and coordination with different sectors of workers in France. It was a clear break with the logic of negotiation and conciliation that prevails in so many French companies that abide by the Employment Protection Plan (PSE).1Translator’s note: The French labor code includes a voluntary plan de sauvegarde de l’emploi (PSE) that allows companies with at least 50 employees that plan to lay off at least 10 of them over the same 30-day period to negotiate covering minimal social costs with their unions. French unions have typically agreed to negotiations rather than fight the job losses.

Now, after 18 days of strike, the workers are renewing their strike and shoring up their side of the relationship of forces with the bosses. Facing a management that still refuses to talk about jobs, the strikers decided to get tougher. Sébastien, a refinery worker at Grandpuits, explained: “What we decided today is to extend the strike until Friday at the very least. Management is not listening, so we voted to halt the removal of raw materials and stop shipments.”

The first action of this week set the tone: the strikers had set up a barricade that blocked access to the site. On Wednesday, they reaffirmed that they would carry out only work directly related to safety and the environment, but under no circumstances will they do any of the “major shutdown” work related to dismantling the plant. Fuel shipments would also be stopped on Thursday and Friday, and no product would be allowed to leave the refinery. The strikers are determined to shift the relationship of forces against Total.

Since the beginning of the conflict, refinery workers have emphasized the danger that Total’s conversion plan represents for the health of the site’s workers, their psychological wellbeing on the job, and the environment. By reducing the number of jobs, especially safety-related jobs, the risks of an industrial disaster for a Seveso-classified site will be much higher.2Translator’s note: In the European Union, the Seveso Directive spells out the risks of major chemical accidents. These risks are so palpable that even DIRECCTE (the Regional Department of Enterprise, Competition, Consumer Affairs, Labor, and Employment) has issued a warning letter to the refinery management.

But for the strikers, trusting some organ of the French state is not on the table — as Paul Feltmann of the CGT trade union confederation told the general assembly: “The only thing that counts is the relationship of forces. Management despises us and will continue to do so if we don’t find a way to make ourselves heard.”

What has become the true “Grandpuits method” stands in complete contrast to how the unions and workers at most other companies facing job losses have responded. Christian Porta, a CGT representative from Neuhauser (the huge French industrial baking company) who came to support the strikers, highlighted the exemplary character of the struggle led by the Grandpuits refinery workers:

No matter what the state says, it is not on the side of the workers. Otherwise, it would have already banned layoffs. The only way to win is through struggle. Don’t give up. What you are doing is a great example. We, too, have gone through layoffs. We fought. And the victories we obtained were thanks to the struggle.

Many supporters were in Grandpuits for the general assembly on Wednesday. They included railworker delegations from Interpro du 77 and the GIGM (Interpro Grand Melun Group), who made clear that the “conversion” project at Grandpuits would affect the entire area and that with the site’s closure, many temporary workers at the refinery and workers throughout the region would lose their jobs.

Workers from other refineries also responded. There was a delegation of CGT workers from Feyzin, where 90 percent of the workers struck for 24 hours last week in solidarity with Grandpuits, and of workers from the Mède refinery. Linking up with other Total workers is central for the Grandpuits strikers, who are preparing delegations to visit all of France’s refineries in the coming days with the aim of broadening the strike movement.

Workers from other sectors facing layoffs and PSEs also attended the general assembly, including from Toray and Cargill.

Sébastien spoke to the importance of coordination and of the Grandpuits workers’ plan to participate in a demonstration in Paris on Saturday against layoffs:

We, the refiners of Grandpuits, will be present on the 23rd not only in the spirit of solidarity, but also because we are determined to engage in the fight with all the workers of France to say that enough is enough. We, the wage workers and salaried employees, are the ones who operate the machinery, and it is thanks to us that the bosses make money. So if tomorrow we say that we won’t lay a hand on our tools as long as the bosses refuse to listen to us, that’s what we’ll do.

This, he explained, is why it’s so important that strikers have reached out to other sectors on strike to forge ties and prepare a common front of struggle against the bosses.

Teachers and students also came to the general assembly to lend their support. Youth from the New Anticapitalist Party raised the need for contributions to the strike fund, which after nearly three weeks of conflict is more crucial than ever. They contributed 800 euros they had collected at a rally in support of Gaël Quirante, a fired leader of the postal workers union in Nanterre.

Once again, the Grandpuits general assembly was a beautiful demonstration of working-class solidarity, showcasing both the need for cross-sector coordination of the struggle and the “Grandpuits method” — refusing to let jobs be destroyed, self-organization, and strike action as a way to shift the relationship of forces. In this sense, the Grandpuits workers’ strike is a school of struggle against job cuts, one whose logic must spread to raise a movement against the bosses and prepare for the next anti-worker attacks. In the struggle for jobs, Saturday’s demonstration will also be an important step in building the fightback.

First published in French on January 20 in Révolution Permanente.