Hundreds of Thousands of Workers Protest Layoffs in Argentina

On Wednesday, hundreds of thousands of workers participated in a massive labor march called for by the major Argentine unions. 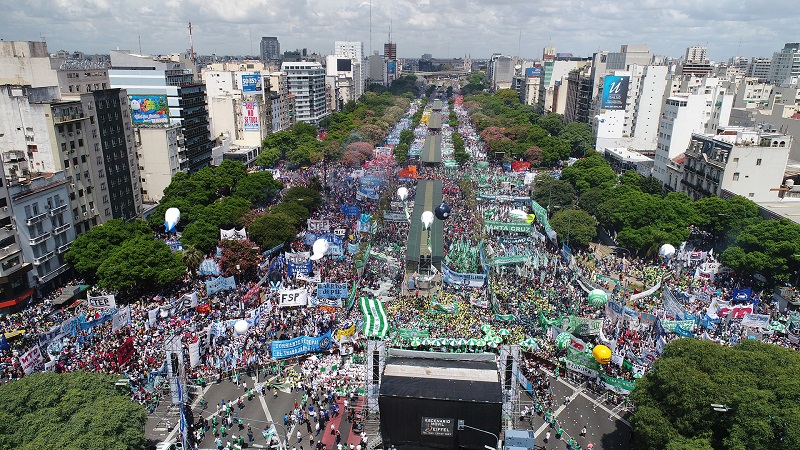 It has been a summer of resistance in Argentina. In late December, there were massive mobilizations well into the night against a pension reform law that was eventually passed. In January, the resistance continued, although on a smaller scale. Workers have resisted the mass layoffs of the right wing Cambiemos government. For example, miners in Rio Tubrio voted to go on strike, occupy the mine and engage in road blockages. In Buenos Aires, workers at the Posadas hospital organized large mobilizations outside the hospital and blocked one of the major roads in Buenos Aires. Many small workplace mobilizations like this have sprung up across the nation.

Finally, the union leadership called for protests responding to the combative will of their base. The protest was organized first by the Truck Drivers Union, with several other sectors joining. The protest was against layoffs and against the pension reform law.

Hundreds of thousands of workers mobilized on Wednesday, February 21 against the Macri government’s austerity policies. The march was called by the leader of the truck workers union, but found support in sectors of the CGT (Central General de Trabajadores – General Confederation of Workers) and different sectors of the CTA (Central de Trabajadores Argentinos), which represents public sector workers. While the union leadership denounced the government but would not announce a plan to combat President Macri’s policies.

The most combative unions and left parties participated in an independent contingent that demanded that the unions make a plan for struggle and organize a general strike to defeat the austerity measures. These sectors participated independently in order to demonstrate their support for their struggle, but not lend support to a union leadership that has dragged its feet to put up a fight against austerity.

The contingent was led by a banner that read: “Reinstate the workers, stop the austerity plan, organize a general strike, plan the struggle.”

The speeches by union bureaucrats sharply contrasted with the demands of the crowd. The union leaders talked tough but did not even try to lay out a plan for how to confront the layoffs and austerity measures. This was exemplified by Hugo Moyano, the leader of Argentina’s largest labor union, the CGT. After speaking against austerity, he said, “We did not come to threaten the government: we do not want to cause instability.” He stressed that this was “a peaceful march where we came to express how we feel.”

Although we can appreciate the pictures of hundreds of thousands people filling avenues and streets, thousands of workers were could not come because there was no call to strike. Some unions in the CGT did not even allow a short stoppage for the workers to attend the march and express their opposition to the national government.

This is why the left is building a strong workers movement independent for the union bureaucrats who shy away from a struggle. The Macri government has demonstrated that they can and will implement austerity despite the mobilizations of the people.