If Black Lives Matter, Then Stop The Evictions

In 2013, the Black Lives Matter movement developed in response to police violence and murder of Black people. While this movement is largely associated with fighting police brutality and exposing the systemic racism of the criminal legal system, Black Lives Matter is also a housing justice issue. 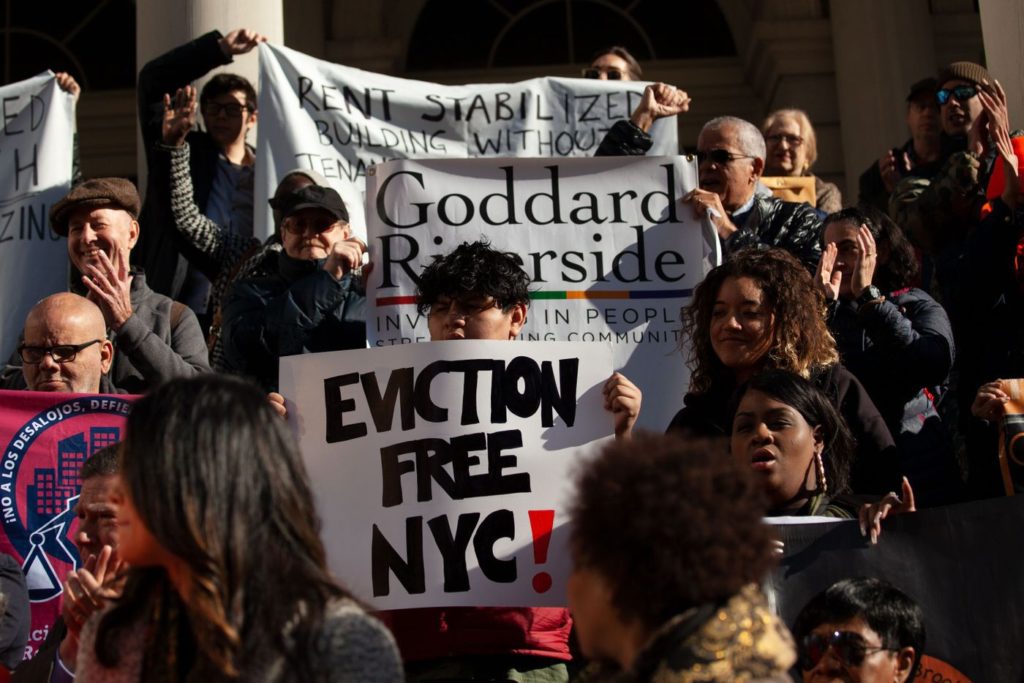 Protesters have been flooding the streets across the nation — and the world — ever since the murder of George Floyd. This murder took place on the street, in broad daylight, in view of multiple witnesses. As we head into a moment characterized by record unemployment, economic recession, and the lifting of moratoriums on evictions, we must prepare to fight against the violence inflicted by the police in Black homes.

Breonna Taylor, a 26-year-old Black emergency room technician, was shot multiple times by Louisville police officers who broke into her home in the middle of the night.  Her death is a brutal reminder that, even when asleep in their beds, Black people are at risk of police violence.

While evictions generally lack the spectacle of police shootings, they too can be deadly. The encounters with the cops can prove deadly, but so can the condition of houselessness. Due to the coronavirus pandemic, courts across the United States were forced to take measures to flatten the curve and minimize the public health risk of evictions — a momentary recognition that housing has serious life and death consequences. In response to the outcry of tenants and housing advocates, a patchwork of temporary federal, state, and city eviction moratoria were issued, but many are set to expire shortly, which Princeton University’s Eviction Lab has been tracking. 12 states already ended eviction protections in May.

Despite the ongoing pandemic, courts across America are beginning to reopen. In New York, Governor Andrew Cuomo has begun the process of reopening eviction proceedings. New York City’s housing courts have reopened for landlords to initiate new eviction filings and courts have begun virtual conferences. But the public health crisis is not over, nor is the economic crisis of massive unemployment. Millions of tenants are simply unable to pay their rent. Therefore, this reopening places disproportionately Black lives in danger of homelessness, exposure to Covid-19, and ultimately risk of premature death.

Both Governor Cuomo and the Chief Judge Janet DiFiore of the State of New York are making the choice to start reopening the courts for eviction proceedings. They have the authority to keep the courts closed if they wanted to, but this would bring them into conflict with the powerful real estate interests with which they are fully aligned. On June 22, thousands of protesters organized rallies, die-ins, and scream-ins all across the state of New York to protest courts reopening, demanding a stop to evictions and the canceling of rents.

19 legal services organizations, including The Legal Aid Society and The Bronx Defenders, have expressed their opposition to reopening housing courts for public health and safety reasons. As for the Association of Legal Aid Attorneys – UAW Local 2325, Legal Services Staff Association, NOLSW/UAW 2320, and other legal services worker unions have all similarly expressed opposition to reopening housing courts for the duration of this pandemic: not only to protect thousands of legal services workers from exposure to Covid-19, but to protect the tenants — our clients. All of our safety and all of our struggles are entangled. Protecting disproportionately Black and brown communities from eviction ultimately benefits all New Yorkers who risk a spike in infections due to coronavirus exposure.

It’s not just lawyers who are ringing the alarm. 69 housing advocacy organizations wrote an open letter to Governor Cuomo demanding that he extend a universal eviction moratorium to protect all tenants across New York State for the duration of the crisis. Housing advocates predict 50,000 new cases may be filed for nonpayment of rent following the expiration of Governor Cuomo’s eviction moratorium. These numbers are staggering.

Either way, until rents are canceled and comprehensive governmental relief has been passed, resuming eviction proceedings is disastrous policy. It places the property interests of white, wealthy landlords and corporations above working-class, poor, Black, and Brown tenants. This is not hyperbole. On June 15, The Right to Counsel NYC Coalition along with JustFix.NYC and the Anti Eviction Mapping Project released their 2019 NYC Worst Evictors list: we can visually see that these landlords who will benefit the most are white (and obviously wealthy) men who passively extract their profit from the poor and working masses.

We know that not all New Yorkers face the same level of risk and exposure. The data shows that Black and Latinx tenants are disproportionately renters, and they are disproportionately impacted by evictions and homelessness. The data also shows that the economic impact of the pandemic disproportionately impacts people of color. The racial and economic segregation of New York City’s neighborhoods clearly shows just how devastating the coronavirus pandemic has been and remains for Black communities. Perhaps most alarming of all, the data shows that Black and Latinx people are dying at twice the rate of whites in New York City from Covid-19.

Exposure to Covid-19 in housing courts will place Black and Brown working class communities at heightened risk of death. Every step of the way in an eviction proceeding — from its initiation to its conclusion — tenants are subjected to unnecessary contact and exposure. This risk comes from the service and receipt of notices and papers, waiting in line to enter housing courts and clear security, tenants and lawyers lining up in tight hallways, people crammed in elevators to get to their court appearance, commuting to and from the courts, and the many other points of contact between court personnel, court officers, lawyers, judges, and the thousands of tenants that pass through each borough housing court office.

Working-class New Yorkers, particularly in Black communities, are struggling to survive this public health crisis and are simultaneously assaulted with an economic crisis that is not even close to over. Too many do not survive. As the housing advocacy coalition Housing Justice for All has noted, “By July 1, millions of New Yorkers will have missed 3 months of rent. Millions of Black and brown families across the state are now bracing for another attack: the violence of eviction. Meanwhile at least 92,000 New Yorkers remain homeless.” Given these racial inequalities, resuming evictions devalues Black life.

There is only one reason to reopen the courts to resume evictions and kick people out of their own homes: to put the profits of landlords over the lives of Black people. The organization of housing under capitalism flies in the face of common sense: subject to market forces and serving to passively generate profit for the few, homes are emptied through evictions or sit empty as investments while people and families are pushed onto the streets or into crowded shelters.

To implement this brutality, the landlords and their state need force. The Right to Counsel NYC Coalition has noted how “Landlords have used marshals like their personal police force to evict mostly Black and brown tenants.” The pain New York housing courts inflict on Black families is connected to the pain inflicted by the criminal enforcement system. Evictions cause anxiety, stress, and depression — and leave people homeless. In addition to the mass trauma from Covid-19 and from police violence, evictions add an additional layer of trauma that is unconscionable.

Black Lives Matter forces us to question the role and function of the police. It should also force us to confront how state violence takes shape in the form of evictions against Black people. We must divest from policing and instead invest in Black, immigrant, and working-class communities. We must understand that there is no public health and safety without housing. Black Lives Matter means we must take action to extend the eviction moratorium, keep housing courts closed, and house the homeless.

Lisa Edwards is a Black activist and civil legal services attorney for the past three decades. She is a former Civil Vice President of the Association of Legal Aid Attorneys, UAW 2325.

Jared Trujillo is President of the Association of Legal Aid Attorneys, UAW 2325, a union of non-profits in New York that represents lawyers, paralegals, and social workers that focus on criminal defense, immigration, juvenile rights, parent defense, and employment. Additionally, he is a Steering Committee member of Decrim NY, an organization that advocates for the decriminalization of sex work and the empowerment of sex workers. Twitter: @JaredTruEsqueer.

Jason Wu is a legal services attorney in New York City, and a trustee for the Association of Legal Aid Attorneys, UAW 2325. Follow him on Twitter: @CriticalRace.