If They Kill One of Us, We All Rise: Justice for George Floyd and All the Victims of the State’s Racist Violence

George Floyd was murdered on Monday, May 25. His last words were “I can’t breathe,” calling to mind the brutal police murder of Eric Garner who was killed by New York Police in 2014. Rage has spread across the country. We must transform that rage into struggle and organization. 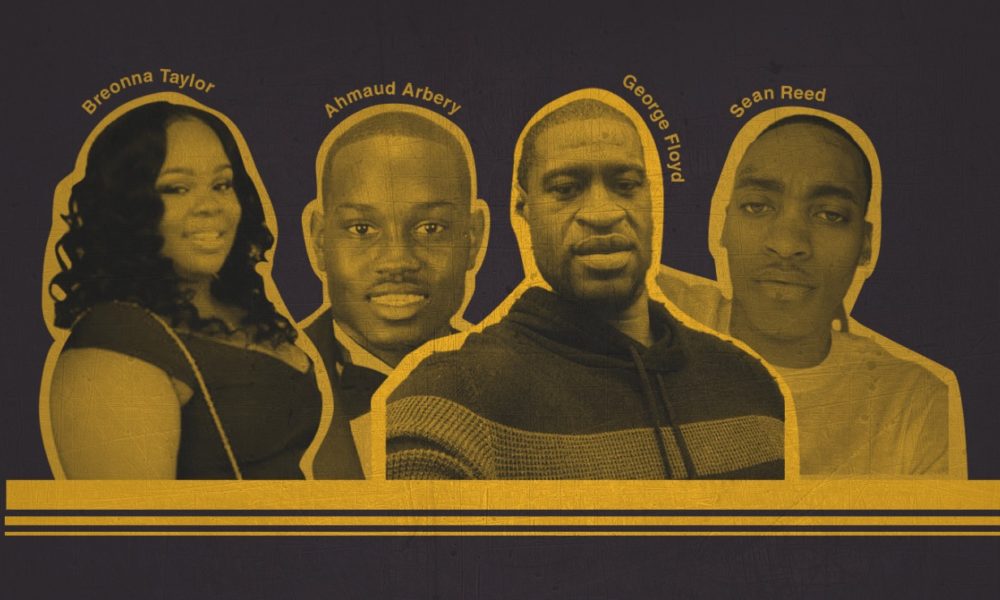 Violence against Black and Brown people is escalating as one of the consequences of the federal and state governments’ actions to “fight” the pandemic. They are unconcerned about the lives of poor and working people, and as several states take measures to reopen the economy, the police — the armed wing of capitalist rule — have made sure to double down on the repression of Black people. The recent murders of George Floyd, Breonna Taylor, and Sean Reed by the police, as well as the killing of Ahmaud Arbery, represent this increase in racist police and vigilante violence.

We stand with all those who are outraged by the scenes in the horrific video of George Floyd’s murder. Derek Chauvin, cop for the Minneapolis police, held his knee on Floyd’s neck for eight minutes in front of a crowd of people filming him. At times, he is smiling as Floyd cries, “I can’t breathe.” This was a brutal portrayal of what the state and the police have to offer Black people. This country was founded on slavery; Black people did not have basic civil rights until 1965. It was the antiracist struggle, with Black workers and their allies in the vanguard, that ended Jim Crow laws. But the U.S. state and capital have exhibited boundless creativity in their ability to reinvigorate and weaponize racism. Repression, poverty, mass incarceration, and police violence are key features of how this imperialist state maintains order.

Minneapolis, where George Floyd lived, is a highly segregated city with extreme racial inequalities. The housing crisis has affected the African American community for decades, and the unemployment rate before the crisis was 4 percent for the white community and 12 percent for the Black community. With the pandemic, racial inequalities have deepened. More than 40 million jobs in the U.S. have been lost since the crisis began. More than 16 percent of the jobs lost in April were held by African Americans alone. In Minnesota, the unemployment rate in April was 8 percent, and most of those who lost their jobs were Black people; meanwhile, Black people only make up 18.2 percent of the population in Minneapolis. It is not an isolated incident that George Floyd was killed while he was trying to buy groceries. The Black working class and poor are living in despair.

Donald Trump and the Regime Are Also Responsible

Black lives also don’t matter to Trump, who accepted the endorsement of the KKK during his campaign and who has never hidden his disdain for Black people. Trump has called Black-majority cities “rat-infested,” and he has enacted travel bans on people coming from certain African nations, which he calls “shit-hole countries.”

During his time in office, Trump has emboldened the police, the state apparatus, and right-wing groups to even more openly and brutally exhibit their racism. It was Trump’s knee pressed down on Floyd’s neck, Trump’s finger on the trigger of the gun that killed Breonna Taylor, and Trump’s hands holding the shotgun that killed Ahmaud Arbery. Trump is responsible. Yesterday in a tweet, he directly threatened the Minneapolis protesters, saying he would send in the army to shoot them.

Meanwhile, the Democrats try to position themselves as an alternative to Trump, but they are just as culpable. It was Minnesota Democratic governor Tim Walz and Minneapolis mayor Jacob Frey who ordered the deployment of the National Guard to suppress the protests. Joe Biden, the 2020 Democratic presidential candidate, wrote the 1994 crime bill that strengthened the state’s capacity to disproportionately brutalize, criminalize, and incarcerate Black people. Amy Klobuchar released a statement calling for an investigation and for accountability on George Floyd’s case; but as district attorney, not once did she ever charge killer cops in “officer-related deaths.” This included declining to charge Chauvin — the very cop who murdered Floyd. Chauvin and his partner Tou Thao already had blood on their hands and dozens of community complaints before they killed Floyd. Instead, Klobuchar used her position as DA to wrongfully convict a Black teenager and send him to prison for life. The Democrats, no less than Trump, are responsible for the murders, injustices, and indignities perpetrated by the racist police.

“Prosecute the Police, No Justice, No Peace”

After the video of Floyd’s murder went viral, Minneapolis became the center of intense mobilizations to express rage and disgust at the killing of George Floyd. At the forefront of the mobilization are the Black youth whom Trump and the right wing want to criminalize. Yesterday, a police station was set on fire by demonstrators who faced police repression for hours. Mayor Jacob Frey’s words of solidarity were nothing but lip service, as the police were dispatched to disperse the protesters. With no regard for the safety of the people, the police threw tear gas bombs — this is a particularly brutal tactic considering that the coughing caused by tear gas increases the potential of coronavirus transmission. Chanting “Prosecute the police, no justice, no peace” and “I can’t breathe,” protesters did not back down.

But the state is not just repressing the protesters: it is attempting to balance the carrot and the stick in an effort to separate the indignant masses from the fighting vanguard of the movement. Due to the massive outcry that Floyd’s murder has generated, the Minneapolis Police Department fired the officers involved in the case. Additionally, the FBI has taken the case as a “civil rights” investigation and it has just been announced that Chauvin has been arrested by Minneapolis police. But the other three cops who murdered George Floyd remain free. And while the police cracked down on protesters in both Minneapolis, Los Angeles, and Louisiana, riot police were protecting Chauvin’s residence. The Minneapolis Police Department says it will conduct an investigation and act on it, but this is only as a direct result of this week’s protests.

While we deeply mistrust the repressive institutions of the state and do not believe they can be reformed or democratized, we cannot allow the state to get away with these crimes. We call for the imprisonment of all four killer cops who were caught on tape committing this heinous crime. The police and the state won’t do that on their own; it is almost never the case that cops who kill Black people get locked up. But with the strength of our mobilization, this most basic consequence could be imposed. We want to send a clear message to the police: if they kill one of us, we all rise to protect the Black community and the working class.

The murder of Floyd was not an isolated act — it is the result of how Black people are policed. Therefore it is vital to investigate the police chiefs behind this crime. But the FBI is the same federal institution that attacked and killed people who fought for civil rights, that developed COINTELPRO to murder or incarcerate Black activists. Certainly now, under Trump’s control, the FBI has no interest in prosecuting the case and obtaining justice for Floyd. It is in their interest to forge and withhold evidence — the cops regularly do so. With this in mind, it is vital to take to the streets and mobilize for Justice for Floyd in order to force the state — both the police and the FBI — to fully investigate the case with complete transparency. To ensure that a real investigation takes place, it is necessary to put together an independent investigation composed of attorneys, human rights organizations, as well as members of Minneapolis’s community, unions, and rank-and-file organizations. This investigation must have access to all the material used by the FBI, have access to all of its initiatives, and control the investigation put forward by the state. We must also fight for the cessation of the repression of the demonstrators, the withdrawal of the National Guard in Minneapolis, and the immediate freedom of all the arrested protesters.

Unifying the Independent Struggle against the Pandemic, the Economic Crisis, and Racism

We have to build a mass movement on the streets and from the workplaces to strike as one against racist police brutality. This means uniting the movement for justice with the struggle of essential workers mobilizing for protections in the face of the pandemic; it means demanding that the unions take up and lead the fight against police violence. For these struggles are one and the same — the fight against police brutality is part of the fight for PPE or hazard pay or paid time off.

Not only are Black people overwhelmingly overrepresented in the ranks of those forced back to work, who were already working, or who are now unemployed, but the same capitalist system sends both frontline workers and Black people to die each day in order to protect their profits. Fighting for one necessitates fighting for all. Such a coordinated effort — of mobilizations in the streets and strike action by the unions — would be unstoppable, hitting the racist capitalist system where it hurts the most and presenting a united force against the repressive state; it is indispensable in the fight for justice for victims of state violence and all victims of capitalist oppression.

Further, as socialists, we must build a third party. The Democratic Party has nothing to offer Black people, people of color, or the working class. We need a party of the workers and the oppressed completely independent of capitalist parties. This organization has to organize the fight against racism and fight the imperialist regime of the two parties. The multiethnic American working class can rely only on its own strength.

Justice for the victims of state violence does not just consist of holding individual racists accountable. It consists of eradicating a system based on racial oppression and class exploitation. Police have abused, tormented, and killed Black people from their inception as slave patrols in the South and protectors of private property. There must also be an international condemnation of police murders, not just in the United States but throughout the world. Thus, we believe in the abolition of the police and prisons. To dismantle these institutions, which are fundamental to protecting the dominance of the ruling class over the exploited and oppressed, it is necessary for the working class as a whole to embrace an antiracist and anticapitalist perspective.

As the capitalist state moves toward reopening the economy in the service of profit, we know what role the police will play. With record numbers of unemployment and pending eviction notices, the cops will be called on to execute the verdicts of capital. The cops will force people out of their homes. The cops will crack down on the working class and poor as they struggle to survive. If we don’t fight back, the cops will be free to brutalize Black and Brown communities. The working class must unite to defend all our communities from these attacks.

Prosecute Derek Chauvin and all the cops involved in George Floyd’s murder!

No more criminalization and repression of protests!