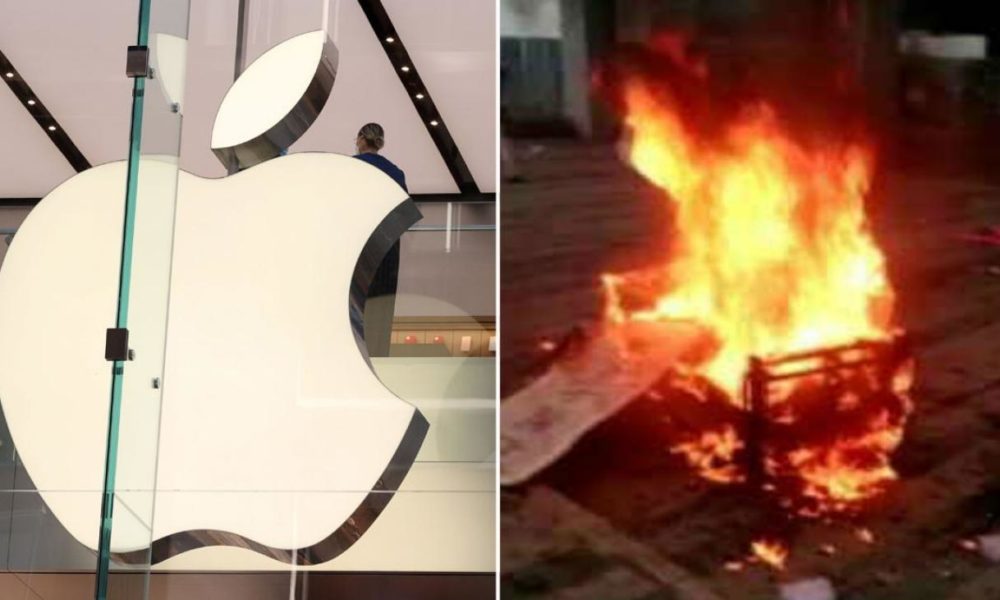 On Saturday, enraged Indian workers stormed an iPhone manufacturing plant after their night-shift. The Times of India called it a “rampage.” Workers at the factory, owned by the Taiwanese company Wistron Infocomm Manufacturing, turned over vehicles and broke windows at the facility, located on the outskirts of the southern city of Bangalore.

The workers say they haven’t been paid in four months and that they have been forced to work overtime, working up to 12 hour shifts to produce iPhones that they cannot afford.. According to the Times of India, the factory has about 2,000 workers, most of whom participated in the protest after the night shift. “Mobs were seen breaking glass panes and doors,” the TOI reports, turning cars topsy-turvy and attacking the offices of senior executives.”

Employees allege they have not been paid properly. pic.twitter.com/GKbeFeyRKc

On Friday night the employees started discussing their salaries while working on the floor. Some claimed to have received only Rs.500 ($6 and 79 cents) in their bank accounts. The anger turned to rage by the time the shift ended. The protest was repressed, and about 100 workers were arrested and damages are estimated at $7 million.

Apple began assembling iPhones in India in 2017, in large part due to ability to hyper-exploit Indian workers. However, it has a 1 percent share of the total smartphone market in the country, since the iPhones are too expensive for nearly all Indian consumers.

The Wistron corporation had received 43 acres in the industrial area of Narasapura from the Indian government, with the promise of providing employment and investment. A spokesman for the Wistron group said, “We have complied with the law and are helping the authorities with their investigation.” From the United States, Apple said it is “ dedicated to ensuring everyone in our supply chain is treated with dignity and respect.” Of course, that “dignity” doesn’t include a living wage or dignified working conditions.

The secretary of the All Indian Trade Union Congress said that the blame lies with “the brutal exploitation of workers” and the dire conditions in the iPhone sweatshop.

This workers’ explosion is part of a general uprising taking place in India. The largest general strike in history took place just a few weeks ago. And mass farmers protests have taken place and intensified over the last month. On Monday, farmers’ mobilizations cut off access roads to the Indian capital.

The government of nationalist Narendra Modi is promoting labor laws that seek to cut wages and benefits to workers. For years, Modi has been the candidate of Indian capital. Through his tenure, from giving land allocations to capitalists, opening up Indian markets to multinationals and chipping away at labor protections, he has seeked to pass a series of neoliberal reforms to favor the industrial employers. Modi also seeks to destroy India’s agricultural system, opening it to large agribusiness transnationals. About 500 million people work directly and indirectly in the agricultural sector, and 50 percent of the population of 1.3 billion people depend on this sector for their survival.

The ultra-right wing Modi government has been developing a strong nationalist, xenophobic, and racist policies against Muslims. Taking advantage of the confrontation with China, Modi is also trying to weld together a reactionary “national unity” to advance an attack on the workers. The coronavirus, in turn, has hit India hard; it now has the world’s second-highest number of cases and deaths.

These explosive demonstrations by the workers of the city and the countryside show the Indian government’s mounting difficulties in attacking the historic conquests of the country’s working class and agricultural workers.