International Solidarity against Xenophobia in Europe

In recent weeks the “refugee crisis” has become a profound social and political crisis in Europe. The images of tens of thousands of people trying to cross the European borders through the Balkans, Greece, or over the Mediterranean, with thousands of dead, show the severity of this capitalist barbarism. We present a joint statement by the Courant Communiste Révolutionnaire (CCR, France), Clase contra Clase (Spanish State) and Revolutionäre Internationalistische Organisation (RIO, Germany). 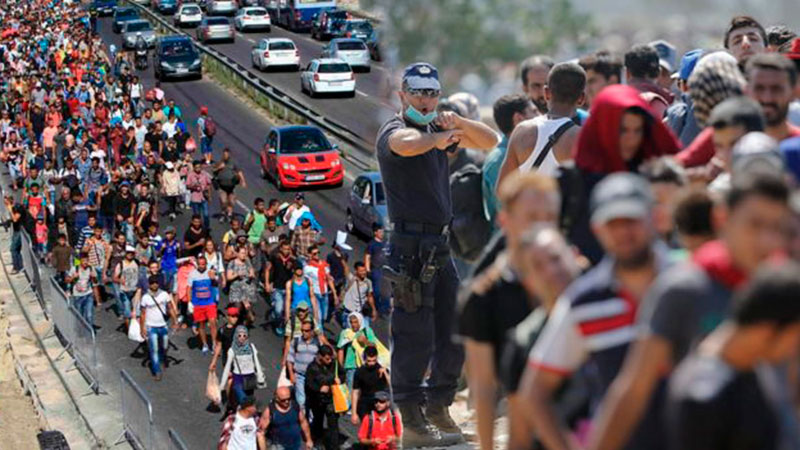 Immigrants and refugees cross the “death routes” from Syria and Afghanistan, passing through Turkey, Greece and the Balkans to get to Hungary and from there try to go to northern Europe. The waters and shores of the Mediterranean have become a cemetery for thousands of immigrants who started their journey in sub-Saharan Africa and other regions of the continent.

After the commotion caused by the photo of Aylan, the little Syrian boy who drowned off the coast of Turkey, European governments demagogically “express concern” about the “humanitarian crisis,” proposing new plans for the distribution of refugees among countries in the EU. But what matters most to them is to strengthen the restrictive immigration laws in order to stop the influx of refugees and immigrants, creating “more humane” refugee camps, which are in fact just “more agile” exit doors for returning immigrants to their countries of origin.

The leaders of the Europe of capital propose the prosecution of “mafias” that profit from smuggling immigrants in brutal conditions. But the problem is the xenophobic immigration policies that create the environment for these criminal networks in ever more dangerous routes. So far in 2015, more than 320,000 people immigrated “illegally” to Europe.

Barriers, metal fences and repressive laws do not stop the migratory waves generated by deeper causes, such as armed conflicts, poverty, and social crisis. These repressive laws only make migration more dangerous and bring about tragic consequences for tens of thousands of people.

European and US imperialisms, with their policies of systematic economic pillaging and their political and military interventions in the Middle East and Africa, are primarily responsible for this situation.

Demonstrations of Solidarity with Refugees against Xenophobia and Imperialist Hypocrisy

In recent months, Germany has experienced a surge of violent xenophobic attacks, reaching one action of this type per day. Attacks on refugee shelters and social organizations, arson, and racist demonstrations have multiplied.

But mobilizations of solidarity in response are also increasing, rejecting racism and xenophobia while condemning imperialist migration policies. Ten thousand people took to the streets of the German city of Dresden, while more than twenty thousand demonstrated in Vienna, shouting, “Refugees welcome!” and harshly criticizing the measures proposed by the European governments. There were also protests with the same slogan in Barcelona, Madrid, and other Spanish cities. In Germany and other countries, sectors of the population are actively showing solidarity with refugees, providing them with water, toiletries, clothes and food, despite the refusal of the authorities to assist and much less organize these actions.

Faced with this crisis, the German government wants to show a “humanitarian” face, repudiating racist attacks and announcing the partial suspension of the “Dublin agreement” for refugees from Syria. The “Dublin system” stipulates that a refugee can only claim asylum in the first EU country that he or she enters. But at the same time, the German government has worsened the situation for refugees and immigrants from other countries, tightening asylum laws to provide for “express” deportations of refugees from the Balkans. This policy is combined with a discourse that seeks to divide between immigrants who supposedly “deserve” asylum and the ones who do not, outlawing the vast majority of immigrants and refugees, pushing them to even worse conditions of subsistence and condemning them to overexploitation.

In the UK, the Cameron government proposes to reform the immigration law to include prison sentences for illegal immigrants and for people offering assistance. In Denmark, the parliament voted overwhelmingly to reduce the amount of aid for refugees in the country. In the Spanish State, a minister in Rajoy’s government compared refugees with “leaks in a house” that need to be “plugged.”

In Eastern Europe, new fences have been erected and borders have been reinforced to prevent more refugees from entering these countries, accompanied by a violent and racist campaign of repression, as in Hungary.

The growth of xenophobic parties of the extreme right in Europe, such as UKIP in the UK, the National Front in France, xenophobic extremist movements in Germany, the Danish People’s Party, Jobbik in Hungary, Golden Dawn in Greece, the Law and Justice Party in Poland or the FPÖ in Austria, demonstrate this right-wing polarization in many countries. These parties use the immigration crisis as leverage to strengthen their xenophobic discourse and nationalistic agendas. They use the fear generated by the high rate of unemployment in different countries to deepen the gap between native workers, the generations of immigrants who are already residents, and hundreds of thousands of people arriving in Europe.

Xenophobic discourses seek to divide the working class in Europe – a class that in recent decades has become increasingly multinational and multicultural – between natives and foreigners, immigrants and refugees, weakening its forces and undermining its ability to organize. In this way, they are looking for “scapegoats” to the crisis, to avoid condemning capitalism which is responsible for the tragedies suffered by the exploited and the oppressed.

An anti-imperialist and anti-capitalist program

Reactionary nationalist and xenophobic political discourse can only be confronted by a powerful social movement, composed of the working class and the masses, that combines the defense of the rights of refugees and immigrants with the all the workers’ demands in the face of the crisis.
Necessary is a massive social movement to fight for the demands of the refugees and immigrants’ movement, including the repeal of the reactionary immigration laws, the immediate closure of the detention centers and camps for foreigners, and the opening of borders for asylum seekers and immigrants. At the same time it must call for an emergency plan that includes subsidies for immigrants, housing, full social and political rights, and genuine work.

The solidarity that more and more people are providing to the refugees in Germany and other countries is an extraordinary signal. The terrible situation facing refugees, however, it is not only a humanitarian tragedy. Above all, it is a social crime of capitalism, and therefore a political and class issue.

That is why trade unions and workers’ organizations have to join the struggle of immigrants and refugees, raising their demands and organizing them. Faced with the current “refugee crisis” it is necessary to demand emergency measures and mobilize the workers and masses. However, the union bureaucracies have not the slightest interest in organizing refugees and fighting alongside them. In the ranks of unions and labor organizations there is lots of racism. That is why it is necessary to organize a militant tendency in solidarity with immigrants and refugees to fight racism within the unions and promote a plan of action that includes all their demands, unifying them with the fight against precarious conditions, aginst mass unemployment, for wage increases, against cuts in health and education, etc.

Against the violent attacks by neo-Nazi groups it is vital not only to organize the broadest class solidarity with immigrants and refugees, but also to promote the construction of self-defense committees that can ensure the safety of refugees from increasing racist attacks and state repression, as happened last year in Germany when a broad political movement in support of the refugees was severely repressed by the police.

In the context of the capitalist crisis affecting many European countries, these demands cannot be separated from the fight against unemployment and the “austerity” policies of governments and the Troika, calling for the distribution of available work among employed and unemployed workers, “natives and foreigners,” with a living wage, as well as increased social spending, for which is essential to impose the cancellation of debts of debtor countries and the nationalization of the banks and big industry under workers’ control.

The “refugee crisis” is an expression of the class interests of the bourgeoisie to divide and degrade the living conditions of the different sectors of the working class, whether “legal” or “illegal,” natives and immigrants, precarious or “secure.”
This crisis has become a massive social catastrophe, the result of decades of imperialist policies in regions from which hundreds of thousands of people are now being forced to flee.

Therefore it is also necessary to raise an anti-imperialist program that opposes the military interventions and arms exports of the central countries, proposing an anti-capitalist, anti-imperialist and class-based solution to the barbarism affecting peripheral countries.

Faced with the rise of xenophobic and reactionary policies of European governments, we need to develop a perspective that unites the struggle for full rights for immigrants and refugees with the struggle of the working class against the capitalists. There is no progressive solution to the current crisis without confronting the Europe of capital, fighting for workers’ governments with the perspective of a workers’ Europe.

RIO (Revolutionary International Organization) of Germany, CCR (Revolutionary Communist Current) in the NPA of Francia, and “Clase contra Clase” (Class against Class) of the Spanish State.