International Women’s Strike Calls for Anti-Capitalist, Anti-Imperialist Feminism of the 99%

On Sunday, the International Women’s Strike New York held a kickoff panel calling for an anti-capitalist and anti-imperialist feminism. 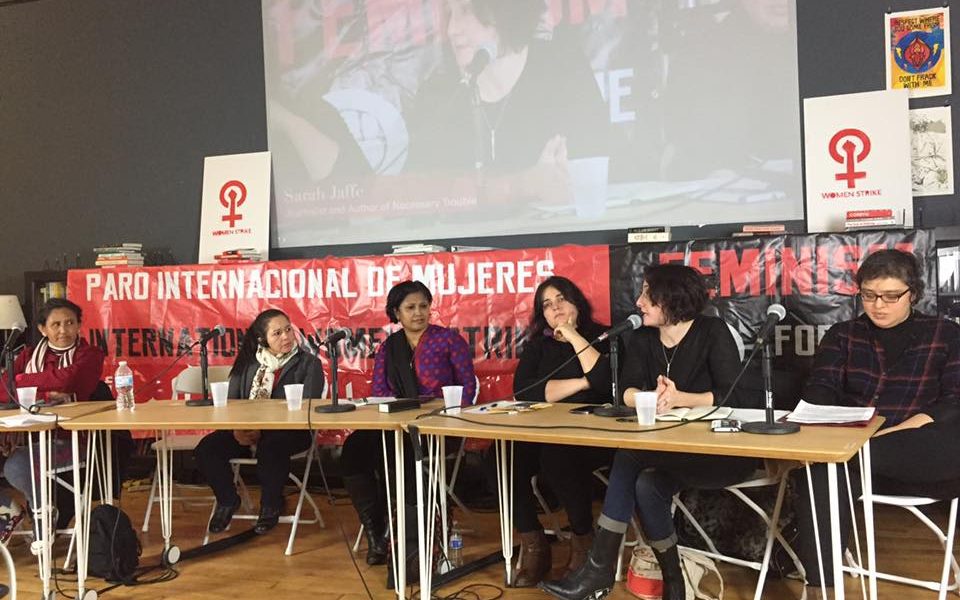 On January 20, on the anniversary of his inauguration and for the second year in a row, hundreds of thousands of women across the country took to the streets to fight for women’s rights and against Trump. As was to be expected from a President who brags about sexual assault, it has been a year of attacks against women, as well as other sectors of oppressed people. It has also been the year of #MeToo, where for the past several months, denunciations of sexual violence directed at Hollywood and the political elite brought attention to this epidemic.

Like last year, this year the Democratic party tried its best to co-opt the Women’s March. One of the major slogans this year was “Power to the Polls,” arguing that women should trust the Democratic Party to defend our rights. This year, the Women’s March in Los Angeles invited known Zionist Scarlett Johansson to speak, as well as including a contingent known as “Zionesses,” who claim to be progressive Zionists.

However, the fact that hundreds of thousands took the streets for two years in a row against Trump and his misogyny demonstrates that far from passively accepting the Trump era and its’ attacks, there is a will to demonstrate against it. However, it is not enough to be anti-Trump — we need a women’s movement that has a clear and independent way forward.

The fact that #MeToo highlighted sexual violence by elite Hollywood moguls against Hollywood stars demonstrates that wealth will not protect women from harassment. Yet, capitalist billionaires like Oprah are all too willing to give liberal feminist solutions to this problem without questioning the broader capitalist system. That is why we need a different kind of feminism.

Last year, a call for building the International Women’s Strike in the U.S. emerged, with a strong call for a Feminism of the 99% — a clear break with “lean in” feminism. The call, signed by figures such as Angela Davis, Cinzia Arruzza, Keeanga-Yamahtta Taylor, Linda Martín Alcoff, Nancy Fraser and others stated, “Women’s conditions of life, especially those of women of color and of working, unemployed and migrant women, have steadily deteriorated over the last 30 years, thanks to financialization and corporate globalization. Lean-in feminism and other variants of corporate feminism have failed the overwhelming majority of us, who do not have access to individual self-promotion and advancement and whose conditions of life can be improved only through policies that defend social reproduction, secure reproductive justice, and guarantee labor rights. As we see it, the new wave of women’s mobilization must address all these concerns in a frontal way. It must be a feminism for the 99%.” Anti-imperialism, anti-capitalism, anti-racism and inclusion of trans women characterized this emergent feminism. The call resulted in a rallies and marches around the country, with several thousand people gathering in New York City. Three school districts closed down as a result of the call to strike as well.

This year, the International Women’s Strike is at it again, calling for a one hour work stoppage from 4 to 5 p.m. on March 8, and in New York City, a rally and march starting at Washington Square Park beginning at 5 p.m. The national call states, “So, on 8 March we will strike against mass incarceration, police violence and border controls, against white supremacy and the beating drums of US imperialist wars, against poverty and the hidden structural violence that closes our schools and our hospitals, poisons our water and food and denies us reproductive justice. And we will strike for labor rights, equal rights for all immigrants, equal pay and a living wage, because sexual violence in the workplace is allowed to fester when we lack these means of collective defence.” This political stance differentiates the “Feminism of the 99%” from the “Power to the Polls” feminism we saw two weeks ago. 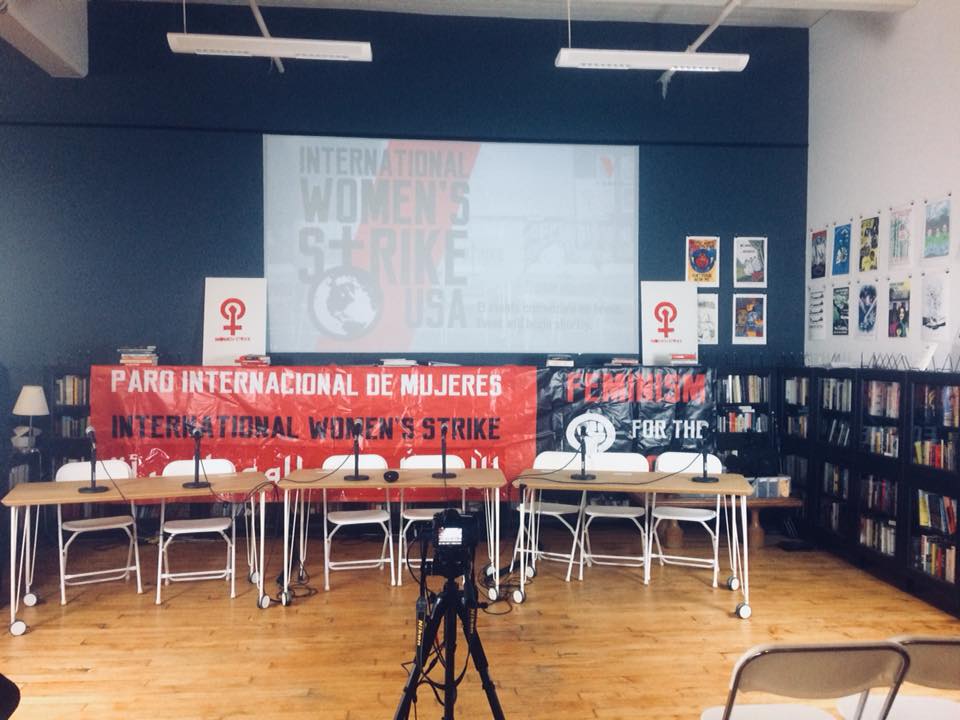 In New York City, about a hundred people came out on a Sunday for the International Women’s Strike kick-off event. The panel included a diverse group of women who discussed imperialism, labor struggles, sexual violence, police violence and the need to build a feminism that fights against all forms of violence against working class and oppressed people. Their talks summed up the “Feminism of the 99%.”

The first speaker, Jeanette Vizguerra, was named one of Time Magazine’s 100 Most Influential People after she sought refuge in a church in Denver and won her right to stay in the United States. In discussing her struggle she said, “I speak without hairs on my tongue, as we say in Mexico. I send this message to President Trump: I am not afraid. This system wants to oppress us and silence us, but that won’t happen.”

Next, spoke María Inés Orjuela, a hotel worker who recently struggled for and won the right to unionize at the Hilton Hotel. She is now a member of Unite Here Local 217. Ines spoke about the long hours and arduous work that breaks the backs of the overwhelmingly female housekeeping staff. She described the struggle to unionize at her hotel, where the Hilton hired Cruz and Associates, well known union busting firm to try to convince workers to vote against the union. Despite the Hilton’s attempts to deter the workers, only 5 voted against unionization. Now the Hilton workers are struggling for a contract. Hilton has now hired Jackson Lewis, another well known workplace law firm to stonewall negotiations. She said, “We are a hotel that is united. The women are united and with the men in the hotel; we are like a chain. To have a strike, to have a union, you have to be like a chain — very strong and united.”

Next, Chaumtoli Huq, a human rights attorney and founder of Law at the Margins spoke. She addressed the experiences of Bangladeshi women and denounced U.S. imperialist violence and genocide. She said, “Racism, violence, imperialism, sexism and state violence are interlocking oppressions. And that they work on the bodies of all people — women, women of color — in most violent ways. We experience that daily through poverty, through state violence — through all these forms of oppression.”

Suzanne Adely, a human rights lawyer and organizer in the Arab-American community also contributed, focusing on the experiences of Middle Eastern women, and echoed the denunciation of U.S. imperialism. She stressed the importance of internationalism, pointing to women who have been on the front lines of struggles in countries like India, Egypt and Bangladesh and organize in deeply repressive conditions. She said, “The way we look at gender violence is broader than the way it is presented in spaces like the Women’s March. For us, gendered violence includes state violence at the hands of police officers… It includes violence against women that is created by colonialism and that is created by U.S. wars and imperialism.” Adely went on to identify the need for a women’s movement that is in solidarity with Palestine and fights to free Ahed Tamimi and the 400 Palestinian children in Israeli prisons.

Sarah Jaffe, Journalist and author of Necessary Trouble spoke about the #MeToo moment, which gained strength with the denunciations of Harvey Weinstein made by wealthy women, creating a unique political moment for the Women’ Strike. She argued that the actions on March 8 are “a demonstration of solidarity and political power. In Ireland they are striking for the right to an abortion. I’m thinking of women all over the world who are striking to end particular oppressions where they are, but also the ones that connect us all.”

Ximena Bustamante, a proud Mexican and member of the New York branch and the National Committee of the International Women’s Strike, closed the event, putting forward the demands of the International Women’s Strike. “New York is a crucial battleground. It’s of crucial strategic importance for the capitalist class because it’s a ‘capital of the world’ but, precisely because of that, it’s of strategic importance for the organized working class — and by that we mean millions of immigrant workers, and millions of women immigrant workers. It’s not just that we are in solidarity with struggles abroad, but that ‘abroad’ is already inside. We are here.”

She went on to lay out some of the demands of the New York International Women’s Strike which were created with the input of left organizations, unions, workers centers and left political parties around New York City. These demands include reproductive rights, living a life free of violence, labor rights, recognition of women’s unpaid work, the New York Health Act, free public education, affordable housing, funding for transportation, full rights for undocumented immigrants, and statements against ICE, against white supremacy and against mass incarceration.

She said, “We will strike in New York City, the beating heart of global capitalism, to demand an end to the imperialist wars abroad from Syria to Yemen, the global drug wars from Mexico to the Philippines, an end to all neo-colonial projects from Puerto Rico to Palestine…” For these and many other reasons, women in the U.S. and around the world will take the streets on March 8.

IWS is calling for a work stoppage from 4-5 pm. In NYC, there will be a rally followed by a march at Washington Square park starting at 5 pm. To get involved email [email protected]!