A renewed U.S. left is forging its own identity—and anti-imperialism needs to be front and center. Ocasio-Cortez and Bernie Sanders’ soft imperialism runs counter to the building of an internationalist left. 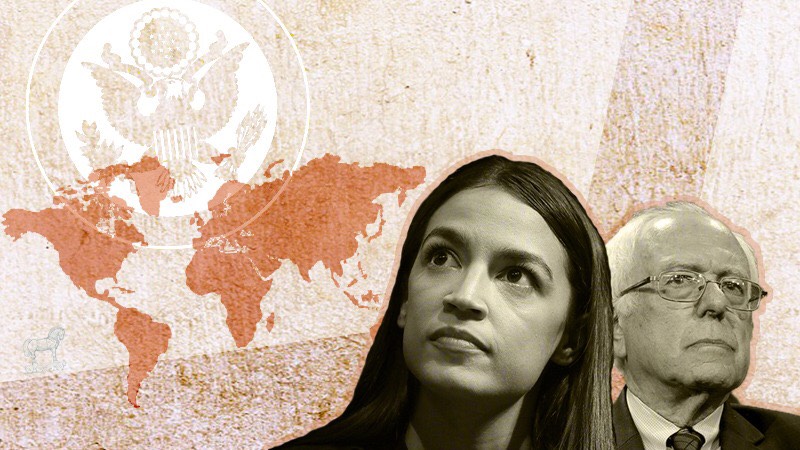 The American left has been practically reborn in the past three years, and among its many growing pains, there is the “issue” of imperialism. Being at the heart of the world hegemon, the U.S. left needs to articulate a clear internationalist perspective, one that seeks to build real links of solidarity with workers of other countries and that gives no concessions to American patriotism. With the U.S. military sprawling across the globe and causing immeasurable suffering to oppressed people in the Middle East, in Latin America and more than 150 countries in different regions, the voice of American socialists needs to be unequivocal: We do not condone or justify U.S. military interventions abroad or economic sanctions like the ones imposed on Venezuela or the decades-long embargo on Cuba.

The leading figures of American democratic socialism, Bernie Sanders and Alexandria Ocasio-Cortez (AOC), expressed at first a correct rejection of U.S. threat of intervention in Venezuela, in early February. They both spoke against military action in the country after Venezuelan National Assembly member Juan Guaidó proclaimed himself president and the Trump administration came out in support of him.

But it didn’t take long for both Sanders and AOC to move to a position more in line with the American political establishment. Sanders tweeted on February 23 that the government of Venezuelan President Nicolás Maduro “must put the needs of its people first, allow humanitarian aid into the country, and refrain from violence against protesters.” But as Jeremy Scahill of The Intercept reported, humanitarian aid is being accepted by the Venezuelan government: from international organizations and China, Russia and other countries. The U.S.-sponsored “humanitarian aid” that Sanders is talking about has been rejected (for being used instrumentally to destabilize Maduro’s government) not only by the Venezuelan government but also by both the Red Cross and the United Nations—not left-wing organizations by any measure.

Sanders’ statement was highly problematic because it legitimized the false narrative advanced by the Trump administration—that the “humanitarian aid” Vice President Mike Pence and National Security Advisor John Bolton offered to Guaidó is a sincere act of solidarity, and that Maduro should let it in. At the very moment Sanders tweeted those words, on January 23, the tension at the border between Venezuela and Colombia was at a highest point. Guaidó was calling on the Venezuelan army to rebel, and the whole situation seemed to be a provocation, posing the real risk of an armed conflict. The hypocrisy of USAID and its real political motives has been widely denounced, but the sole fact that the economic sanctions imposed by the U.S. are more costly than the aid itself should be enough to make anyone who reads the newspaper, and particularly a presidential candidate, suspicious. On March 10, the New York Times published an article with video footage showing that, contrary to the U.S. government’s claims, it was the opposition—not Maduro’s forces—that set fire to the aid convoy.

Writing for Jacobin, Meagan Day puts forward a realistic set of policies that Sanders could implement if he were to win the elections. In the section “Foreign Policy,” she quotes Phyllis Bennis from the New Internationalism project, who states that by executive order, President Sanders could “withdraw troops from countries around the world where they are deployed.” He could, yes. But he won’t. How do I know? Because he voted for the military intervention in Kosovo in 1999, for the war in Afghanistan in 2001 and for the redeployment of troops in Iraq in 2008.

But even more worrying were AOC’s remarks on the situation in Venezuela. In an informal video posted on Instagram on February 24, Ocasio-Cortez spoke about Venezuela: “It is not about ideology … about capitalism or socialism,” she said while casually chopping a butternut squash. “This is really kind of an issue of authoritarianism vs. democracy.” Let’s be honest, Florida Sen. Marco Rubio could have said those exact same words. And to be clear, this should not be taken as a denial that Maduro’s rule is undemocratic or as any political support to his government. But I find it disturbing that AOC reinforces the narrative of “democracy vs. authoritarianism” so dear to the Trump administration (and so often used as an excuse to invade a country) when a military intervention is clearly on the table, and while Rubio tweets images of former Libyan leader Muammar Gaddafi covered in blood minutes his death—after being deposed by the U.S.-led NATO intervention.

Let’s not forget: The NATO intervention in Libya was a disaster for the people of Libya. It killed hundreds of people, destroyed the country’s economy and left behind a land mired in a low-intensity civil war.

AOC’s comments were unfortunate enough, but this was not all. A few days later, pressed on Twitter by a right-wing journalist to explain what she meant when she said “no intervention” was an option in Afghanistan, she responded: “It means not invading an entire nation without end. Doesn’t mean ‘do nothing,’ it means perhaps we could have leaned more on the larger role of agencies (intelligence, state dept, diplomatic teams, etc) before Congress decided to invade a nation without a concrete end plan.”

It is unclear from this statement whether she was proposing not to invade or to invade but with better planning. Even if we assume the better option, that she proposed not to send troops, the idea that we should “lean more” on intelligence agencies and the State Department is perturbing. Let’s take a look at the role these “agencies” have historically played.

In a sweeping review of the CIA’s history, Tim Weiner digs up some of the most outrageous covert operations it engineered.

From its early days, the CIA carried out covert operations in foreign countries. In 1952,Mohammed Mossadeq was elected Prime Minister after leading the oil nationalization movement as member of the Iranian Congress (the Majlis). Up until then, British oil companies exploited Iran’s oil reserves at ridiculously low costs. Fearful of the increasing influence of the Soviet Union over Iran, the U.S. government was easily persuaded by the British to orchestrate a coup against Mossadeq and replace him with Shah Pahlavi. Shah Pahlavi was at the time a king with no real power, but the CIA planned a coup to make him the de facto leader.

The CIA furnished military commander General Zahedi with $5 million and spent hundreds of thousands on propaganda against Mossadeq. In mid-August 1953, tens of thousands more were funneled to hire mobs in Tehran that began a seemingly spontaneous protest against the government. These “protests” turned into riots and were later joined by supporters of the opposition. The CIA itself directed the attacks on Mossadeq’s home, commanding the shah’s Imperial Guard. In the aftermath, anticoup protests were crushed, and thousands of political activists were thrown in jail.

Far from exceptional, the procedure used in Tehran became the CIA’s modus operandi. Time and again, the agency meddled in the domestic politics of countries around the world through intrigue, propaganda and deceit, and always ready to use open or covert military action. The State Department oversaw every mission, in coordination with the Pentagon.

In 1954 the CIA organized and led the overthrow of elected president of Guatemala, Jacobo Arbenz. Portrayed by U.S. authorities and aligned media as a “rebellion” against the “communist government,” the coup included generous funding for the anticommunist opposition and the direct bombing by CIA officials of the capital, Guatemala City. The coup, Weiner writes, was followed by “forty years of military rulers, death squads and armed repression.”

It is well known that the CIA tried to assassinate Fidel Castro hundreds of times, and it is also known that the CIA was at the head of the command that summarily executed in Bolivia one of the most heroic revolutionaries in history, Ernesto “Che” Guevara. What is less often remembered is that the agency also murdered Congolese Prime Minister Patrice Lumumba in 1960, months after he won the country’s first democratic elections—after enduring decades of genocidal rule under Belgium. The State Department considered Lumumba too left and thus a threat to U.S. interests, so it provided opposition leader Mobutu a quarter million dollars to kidnap and murder him.

The Vietnam War should be a cautionary tale for those who still hold any trust in the State Department and intelligence agencies. The war was authorized by Congress based on a false report that North Vietnamese forces had made an unprovoked attack on American ships in international waters. The war that followed left an estimated 3 million dead.

Each of these operations left a pile of slaughtered bodies behind, destroyed thousands of lives and caused immense suffering. Entire countries were torn apart by these ruthless and calculated State Department-sponsored covert actions.

Often considered the U.S. “backyard,” Latin America has probably been the CIA’s preferred playground. Government officials were always zealous to dismantle or destroy any threat to capitalism in the region. In the 1970s, under the threat of growing revolutionary movements in the Southern Cone, the State Department and the CIA plotted the Operation Condor. One by one, democratic governments in Chile, Argentina, Uruguay, Paraguay, Bolivia and Brazil were overthrown and replaced by military juntas. Trained by the CIA and using dirty war techniques to kidnap and “disappear” bodies, the military dictatorships massacred socialists, social activists and militant labor organizers. In my home country alone, Argentina, an estimated 30,000 people were killed and their bodies burned, thrown into rivers or buried in common graves. The pain and terror inflicted on my parents’ generation is still vivid among Argentines.

A Left That Is Worthy of the Name

For these reasons, Ocasio-Cortez’s candid endorsement of the U.S. State Department and intelligence agencies are highly problematic. Democratic socialism’s greatest figure is expressing support for the agencies that choreographed massacres and genocides around the world. A “better planned” military intervention, or more reliance on the State Department and the CIA, have not been shown to lessen the damage. Soft imperialism generates just as much grief and despair as the crude, poorly camouflaged version of the Trump administration.

Particularly at a moment when we are witnessing an escalation of U.S. intervention in Latin America by way of a coup attempt in Venezuela, both AOC and Sanders reproduce Trump’s dishonest narrative of a fight for democracy and the “humanitarian aid” scam. The left can do better. The left must do better.

The population in the U.S. is Latinx, Asian, Middle Eastern. Brushing aside U.S. imperialist policies will prevent any attempt to build among the most radical and among the most oppressed. It is important for American socialists to set the record straight. Ocasio-Cortez is the most prominent member of the Democratic Socialists of America (DSA), but no disavowal of her statements has been published so far by the DSA leadership.

The last spring of left activists in the United States before the DSA took place in the late 1960s and early 1970s with the emergence of the Students for a Democratic Society. Although heterogeneous and having many political shortcomings, there was one feature of this wave of communists that made it worthy of its name: They were deeply anti-imperialist. The socialist left in the U.S. should take a page from this generation’s book if it is to become anything other than a left supporter of American imperialism.