Iran: U.S. Once Again Beating the Drums of War

After attacks on two oil tankers last Thursday, tensions between the U.S. and Iran are heating up and Trump’s State department is already building a case for war. Could this be the lead-up to military conflict? 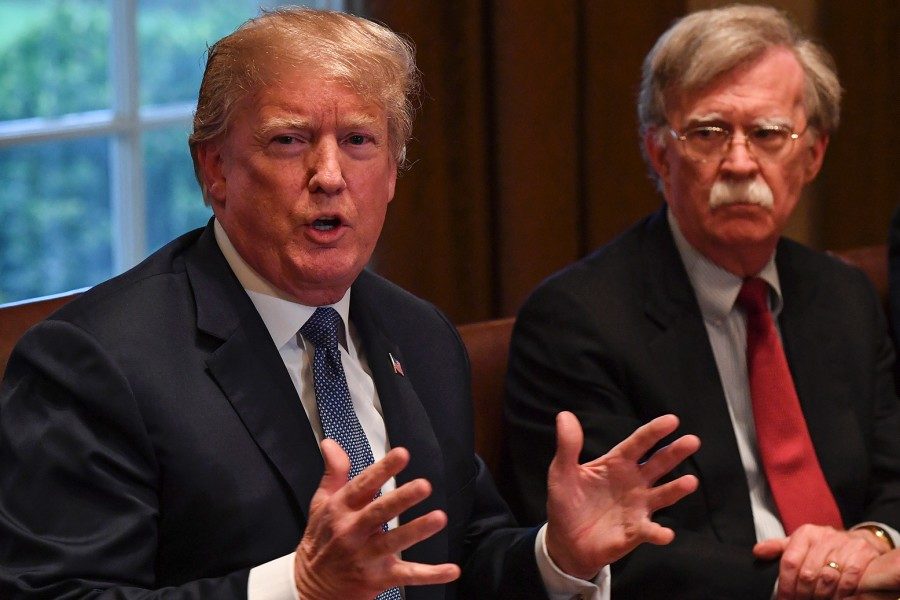 On Thursday, June 13, two oil tankers, one Norwegian-owned and the other operated by a Japanese shipping company, were attacked near the strategic Strait of Hormuz, a few kilometers off the Iranian coast. Even as the dense columns of smoke continued to spew from the burning vessels, claims that the attacks were the likely work of the Iranian military were already being shared by bourgeois media across the globe.

While evidence was still being gathered, President Donald Trump unequivocally placed the blame for the attacks squarely on the Iranian government, saying, with characteristically tautological reason: “well, Iran did do it.” The same day, in a message that was eerily reminiscent of the “coalition of the willing” rhetoric that surrounded the lead up to the U.S. Iraq War, Secretary of State Mike Pompeo was already discussing plans for building a coalition of states ready to protect the safe passage of ships through the straits. “I’m confident that when they see the risk — the risk of their own economies and their own people and outrageous behavior of the Islamic Republic of Iran, they will join us in this” Pompeo said.

Despite these claims, a week later there is still not any conclusive proof as to the perpetrators of the attacks, and even the Japanese government continues to reject claims that it was the work of Iran. By way of evidence, the United States has presented a video of dubious origin in which, allegedly, an Iranian patrol was seen extracting a mine that had not exploded from one of the damaged ships. This claim was denied even by members of the Japanese ship’s crew, who declared that the attack came from a “flying projectile.”

In response to the attacks, the Trump administration has ordered an additional 1,000 troops to the Middle East, a move that came just hours after Iran issued a statement that it planned to increase its uranium enrichment beyond levels agreed to in an earlier nuclear accord. The U.S. withdrew from that accord last year, when it reimposed sanctions on Iran, a move that has led to increasing hostilities between the two countries.

Trump’s accusations against Iran are, not surprisingly, as flimsy as the so-called “weapons of mass destruction” that justified the war and occupation of Iraq in 2003. However, for the neo-conservative wing of the Republican administration, which includes Pompeo and National Security Adviser, John Bolton, facts are little more than minor inconveniences, and it is clear that both men are bent on pushing for a military confrontation with Iran regardless of the president’s stated desire to avoid such a conflict.

Of course, such sabre rattling is nothing new. Iran has been a thorn in the side of US imperialism since the overthrow of the U.S.-backed Shah in 1979, and threats of war, as well as proxy attacks, against the Islamic Republic have been a regular part of U.S. foreign policy for 40 years.

This is in large part because the Iranian revolution that followed the overthrow of the Shah massively undercut U.S. influence in the region. But it also marked the end of the Iranian Oil Participants (IOP) group, a holding company that included British and U.S. oil interests, and thus the end of easy Western access to Iranian Oil reserves, which had generated billions of dollars of profit, not to mention ensuring cheap oil for U.S. import.

Since 2001, thanks in part to several failed and costly U.S. interventions across the Middle East, Iran has become an increasingly powerful political and military force in the region, with growing influence across Syria, Yemen, Afghanistan, and Iraq.

The short-term goal for Trump then, as it has been for at least the last seven U.S. Presidents, is to somehow curtail Iran’s growing power and influence. This means his administration has to either force Iran into submission through carrots and sticks; initiate regime change (as it is currently attempting to do in Venezuela); draw it into a conflict it will lose; or create a scenario in which US forces could legitimately stage a full-scale invasion capable of permanently destabilizing the country as it did first during the Iraq-Iran War and then later in Iraq itself. Obama’s nuclear diplomacy in his second term may seem like the exception to this program, but given the circumstances at the time: bogged down in two full-scale wars in Afghanistan and Iraq with the Syrian conflict still raging; he had little choice but to temporarily seek out more diplomatic forms of pressure.

Now that US involvement in all three of those conflicts is coming to a slow close, the Trump administration is trying to reassert its influence in the Middle East, even as it continues to pivot toward China and Latin America. The result has been a series of crushing new sanctions on Iranian oil that have cut the state’s exports in half. These sanctions have also severely affected the Iranian economy, leading to lower household earnings, unemployment, food shortages, and shortages of medicine and other basic necessities.

Unhappy perhaps with the rate of decline and the continued resiliency of the Iranian regime, which is closely aligned with and in part protected by global powers China and Russia, or just looking for a way to demonstrate its military competency in an election year, the Trump administration is clearly threatening to move beyond sanctions towards a hot conflict that has the potential to further destabilize the entire region. Toward this end, Pompeo and Bolton have been actively compiling and promoting a list of  supposed international crimes committed by Iran, as a justification for war.

Making the Case For War

The standard rationale for U.S. administrations looking to prepare a path to war has frequently involved claims of support for terrorism, and the Trump state department has consistently issued statements condemning Iran’s support for Hezbollah, the Assad regime in Syria, and, in a blatant attempt to connect Iran to the attacks on the World Trade Center in 2001, it’s supposed connections to Al Qaeda. This last claim is a particular favorite of Trump, as it speaks directly to the fears and emotions of his base, who see the September 11 attacks as the beginning of the end of the American empire they want to make “great again.”

But such accusations on their own are not sufficient for an invasion or more muscular forms of intervention. And so Bolton and Pompeo have been working to construct a narrative in which Iran is painted not only as a supporter of terrorism, but—drawing upon the specter of another “tanker war,”—as an existential threat to (specifically Saudi) oil exports. Indeed, last week’s accusations come almost exactly one month after the state department made almost identical claims that Iran was responsible for the bombing of two Saudi oil tankers, also in the Strait of Hormuz. Establishing such a pattern of Iranian aggression, whether true or false, is the first step toward any potential military action or invasion.

These ongoing tensions have since been exacerbated by the deployment of an additional 1,000 troops to the Middle East, a move that has been followed by a series of events that seem almost manufactured to raise the heat of the conflict. A rocket attack on a U.S. Exxon Mobil Corporation oil site in Iraq on Wednesday, and the destruction of a U.S.-manned drone (which may or may not have been in Iranian airspace) on Thursday are unfortunately fueling attempts by Pompeo and Bolton to paint Iran as an existential threat to U.S. interest in the Middle East. Although President Trump has stated that he does not want a war with Iran and that he thinks the recent attacks on tankers are “very minor,” the conflict with Iran is bigger than any one president. Without massive resistance, without a real political threat at home, the relentless logic of imperialism makes an eventual escalation of the conflict likely if not inevitable.

While it is tempting for working people to equate U.S. interests with American prosperity, and to excuse U.S. Empire as a necessary evil in a world of irreconcilable conflicts; the fact is, the ongoing tensions with Iran, Venezuela, China, and Russia, fueled by imperial competition, benefit no one but a small elite: arms manufacturers, oil company executives, and corporate CEOs. For working people around the world, however, U.S. imperialism (as an extension of modern capitalism) means nothing but death, destruction, tyranny, and economic chaos. Meanwhile the massive cost of this global hegemony means that the U.S. is compelled to spend more on its military (about $650B a year) than the next seven countries combined. That’s $650B that is not being spent on education, healthcare, housing, and food.

In 2003, millions of people took to the streets to protest what they saw as an inevitable war with Iraq. Despite the massive turnout those protest had little effect on the decisions already playing out in Washington. Although these protests helped to build a new anti-war movement in the U.S., the election of Barack Obama, who managed to put a friendly and diverse face on U.S imperialism, destroyed that movement almost overnight. If we wish to confront war and avoid yet another massive conflagration in the Middle East, we will have to confront capitalism head on. That means recognizing that American empire is the product not of any one party or administration, but the inevitable result of a capitalist state that is ruled and supported by both parties. Working people should act now to stop any potential war with Iran, but advocating peace, without directly confronting the perpetrators of war, means little.

This article was adapted, in part, from an article originally published in La Izquierda Diario.