Israel Is On the Verge of Another Act of War

Although Prime Minister Netanyahu has pushed back the original July 1 annexation date, which could take more than 30% of West Bank territories, the threat continues to loom. The annexation provides more rights for Zionist settlers and forces Palestinians to remain locked up in small land “islands.” 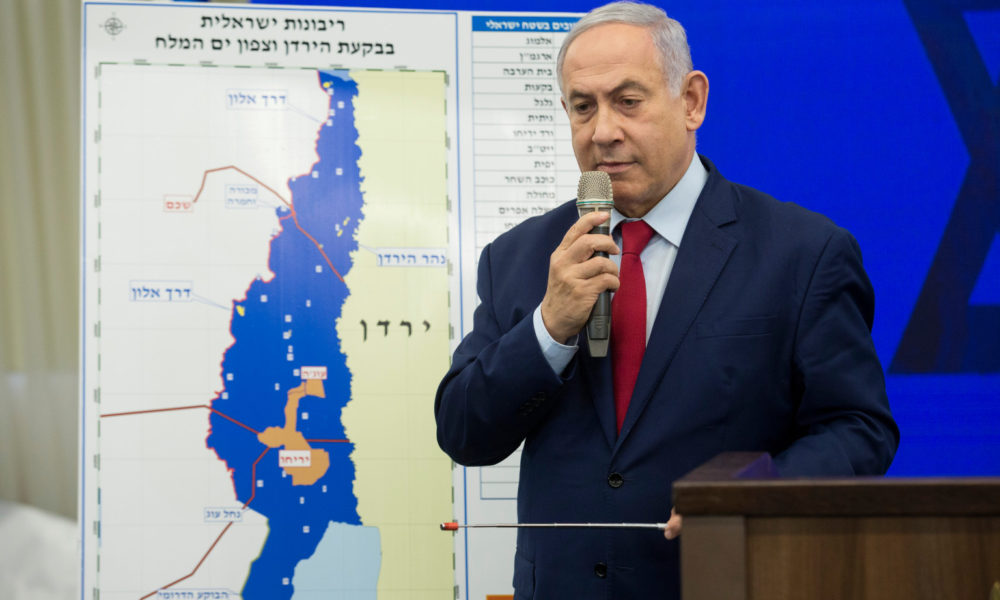 Further annexation of West Bank territory has been a central talking point of Netanyahu’s campaign throughout the election year — during which time Israelis went to the polls three times. That demand has helped him to consolidate his base on the right, particularly on the extreme right, including settlers who live in the West Bank.

This annexation plan is practically a copy of the one presented by Donald Trump in January of this year. Cynically, President Trump called that proposal a “peace plan for the Palestinians” and “the deal of the century.”

Unsurprisingly, the other party, the Palestinians, were not part of this plan.

The annexation plan, which amounts to little more than a blatant theft of Palestinian territory, consists of annexing up to 30% of the West Bank, including the territory of the Jordan Valley bordering Jordan, which is one of the most fertile areas in the region. Additionally, the plan includes incorporating within the borders of Israel both the settlements that already have legal status and those considered illegal by the Israeli Judiciary.

These settlements are the colonies located in Area C, according the Oslo accords, which is completely administered and militarized by Israel, and covers 66% of the territory of the West Bank. The other areas are A (administered by the Palestinian National Authority — NA — and with its own police) and B (administered by the PNA, but with military control by the Israeli army).

This means that what are now essentially Palestinian Bantustans (the territories where non-white people in South Africa were segregated during apartheid), which have no territorial connection between them, would become permanently disconnected.

Such a move would be a huge leap in the decades-long theft of Palestinian territory and is a new act of war that the Israeli Zionist State, led by the ultra-right-wing Benjamin Netanyahu,  intends to carry forward.

The prime minister is now part of the Kahol Lavan (Blue and White) coalition that includes center-right politician Benjamin Gantz at the helm. The forming of this coalition was rushed by the internal political crisis — which resulted in three elections in less than a year because no candidate alone managed to win enough votes to lead the government.

Netanyahu, who has been in power for more than 13 years, is also accused of three crimes linked to corruption: bribery, fraud, and breach of trust. Through these crimes, he has both increased his personal fortune and that of his family, and retained a huge amount of power.

As former head of the elite unit of the so-called “Israeli Defense Forces,” Netanyahu — who had military intelligence and “counterterrorism” as one of his specialties — participated in many military missions into Palestinian territoty. Through the murder of sectors of the native population or their expulsion to refugee camps in Arab border countries or in the West Bank itself, Netanyahu has already helped Israel steal enormous portions of what little is left of Palestinain land. Indeed, the attorney general of the International Criminal Court concluded last December that there is enough evidence to accuse Israel of war crimes.

No one knows right now exactly what the annexation plan presented by the Israeli government will be. It is likely that Gantz’s hesitations added to the growing opposition to the plan by the main imperialist states of Europe (not for humanitarian reasons, but for the business that they have in the region, and above all for fear that the area will become a powder keg). As such, Netanyahu presented Gantz with a plan that included a “symbolic annexation,” which allowed for an exit door if the maximum plan is impractical.

The Arab countries of the region also raised their voices to oppose the annexation.

The most determined to stop the annexation is Jordan’s King Abdullah II, who insists that “any unilateral Israeli measure of land annexation in the West Bank is unacceptable and undermines the prospects for achieving peace and stability in the region.”

Jordan has the largest number of Palestinian people living in its territory, forced into refugee camps by the Zionist advance. More than 2 million Palestinians live in Jordan, and more than half a million live in Lebanon.

An uprising of Palestinians in those countries, together with those living in the West Bank and the Gaza Strip, with the possibility of the Arab masses of the region joining them, could awaken the solidarity of the growing movement against racism and state violence that has been rising in many imperialist countries. This is the worst nightmare not only for Israel, but also for the Arab bourgeoisie themselves. It is worth noting here that a meaningful part of the Israeli population has also expressed opposition to the annexation plan, which has created some doubts in the mind of Defense Minister Gantz, who only last week declared that July 1 — the first possible date of the proposed annexation — “is not a sacred date.”

On the other hand, Israel has not yet received the green light from the United States to make concrete progress. Although Trump is credited with devising this “deal of the century,” the internal crisis in the U.S. due to the Coronavirus pandemic as well as opposition from the Democratic Party, has meant that Israeli leaders and lobbies have had to work overtime to convince the U.S. government to support the plan.

It is worth recalling, however, that the Democratic Party itself, during the Obama presidency, approved a substantial increases in the budget for the State of Israel, with the aim of continuing to arm its Zionist partner in Middle East to the teeth. Joe Biden himself spearheaded this increased “aid” from the U.S. to Israel in 2016, amounting to $38 billion, which the U.S. would deliver over the course of 10 years. Despite the threats of annexation, Biden said he would not alter this aid package.

As the July 1 annexation date has now passed, it is likely that in the face of international rejection, the fear of class struggle in the region, the ongoing internal political crisis, and the growing economic crisis due to the pandemic (Israel has suffered a second coronavirus outbreak), the “new” Israeli government had to back down — at least momentarily — from carrying out another act of war against the Palestinian people.

This article was originally published in La Izquierda Diario.