Israel’s right-wing government is being praised for its efficient vaccine rollout. But what about the 5 million Palestinians under Israeli occupation? 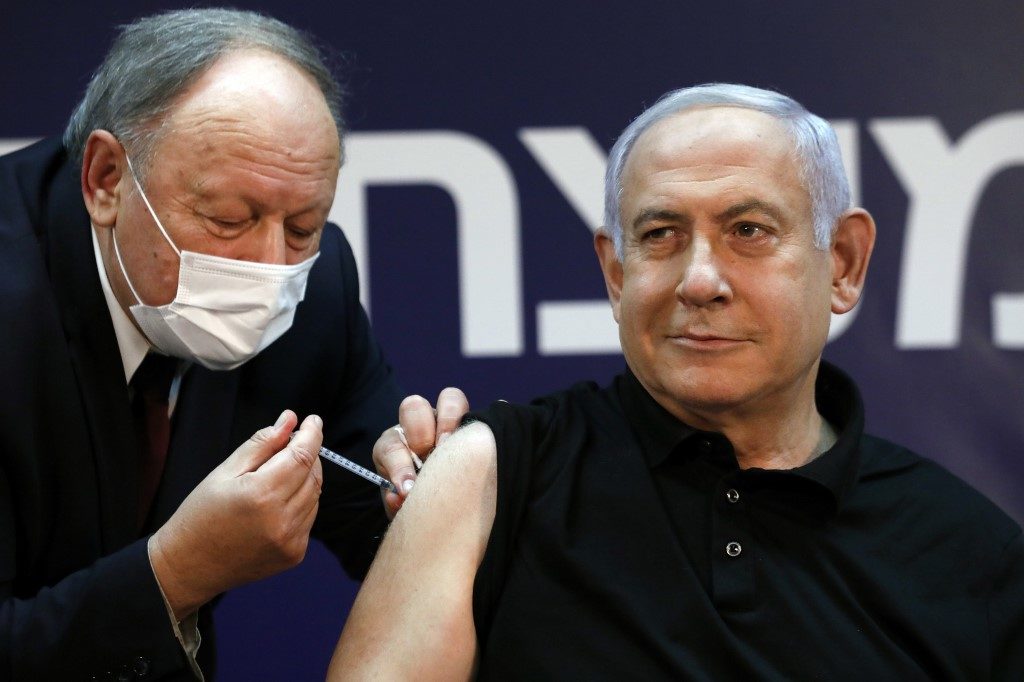 The vaccine rollout in the United States and other imperialist countries has been a disaster. Amid all the bad news, one country has stood out: Israel. Under the extreme right-wing and notoriously corrupt government of Benjamin Netanyahu, Israel has been vaccinating about 1 percent of its population per day. As of two days ago, more than 1 million people in Israel, 12 percent of the country’s 9 million citizens, had gotten a first dose of the vaccine. The U.S., in contrast, had jabbed only 4.2 million people by the same day — just over 1 percent of the population.

Yet these statistics ignore an inconvenient fact: 5 million Palestinians live under Israeli occupation in the West Bank and Gaza. They have their own administration, yet their borders are controlled by Israel, making Gaza an open-air prison. The Israeli army maintains a permanent occupation regime that is also responsible for collecting — and withholding — taxes.

Almost 500,000 Israeli settlers live in Palestinian territories, not including East Jerusalem. These settlers might live just a few meters away from Palestinians, but they enjoy completely different rights — which the old regime in South Africa used to call apartheid. This applies to the pandemic as well, as the Guardian reports:

Israel transports batches of the Pfizer/BioNTech vaccine deep inside the West Bank. But they are only distributed to Jewish settlers, and not the roughly 2.7 million Palestinians living around them who may have to wait for weeks or months.

In other words, Israel is working hard to vaccinate its citizens, but not the millions of oppressed people living under the boot of occupation. This is an example of vaccine nationalism and the deadly disparities between imperialist and dependent countries — particularly crass because these disparities exist side by side. The Electronic Intifada, for example, reports that Israel will be vaccinating prisoners — but not so-called security prisoners, who are all Palestinian.

The right-wing Jerusalem Post responded to a flood of articles about vaccination disparities by — predictably — accusing all critics of anti-Semitism. This false claim is particularly cynical from a newspaper friendly to prominent anti-Semites like Viktor Orbán of Hungary. The Right is attempting to radically redefine anti-Semitism: anyone who criticizes the Israeli government is labeled anti-Semitic, yet even the worst Jew haters are defended if they are friendly to Netanyahu.

The Post’s astounding article avoids any mention of more than 50 years of occupation, as if Palestine were a separate and independent country neighboring Israel. The Geneva Convention stipulates that occupying powers are responsible for “public health and hygiene in the occupied territory,” and specifically for the “adoption and application of the prophylactic and preventive measures necessary to combat the spread of contagious diseases and epidemics.” Yet Israel expects the Palestinian Authority, which is completely dependent on Israel, to round up vaccines from international donors like the WHO-led partnership Covax. The WHO’s Jerusalem office says this might take until mid-2021.

Blaming occupied peoples for their own misery is nothing new. The Moroccan monarchy, which recently aligned with Israel, makes similar claims about the suffering of people in occupied West Sahara.

As workers in imperialist countries, we have an internationalist duty to fight for an equitable distribution of vaccines around the world. Anything else means that oppressed people will be sacrificed to the logic of capitalism — and that, in turn, will prevent the international solidarity we need to end this and other pandemics. This includes the fight to expropriate all healthcare and pharmaceutical companies and put them under working-class control. It also means removing all patent protection from vaccines — which were developed with public funding anyway — to ramp up production. Finally, it means fighting for the self-determination of the Palestinians, the Sahrawis, and other people under occupation.

The vaccine apartheid we are witnessing in Palestine reminds us of the need to fight for a single, democratic, socialist Palestine with equal rights for all, including Palestinian refugees, who must be allowed to return. If we look at Israel’s supposedly “efficient” vaccine rollout, this is based on “efficient” systems for occupation and colonization. And in the face of a global crisis like the Covid-19 pandemic, even the most “efficient” ethnonationalism offers no solutions.