Joe Biden ended months of speculation on Tuesday when he announced that Kamala Harris, the former Attorney General of California and current U.S. senator, would be his running mate. This choice is a blatant attempt to co-opt a movement against anti-Black police by nominating a Black woman who talks about racial justice. But, Harris is not only pro-cop and pro-prison. She is responsible for locking up and terrorizing communities of color. 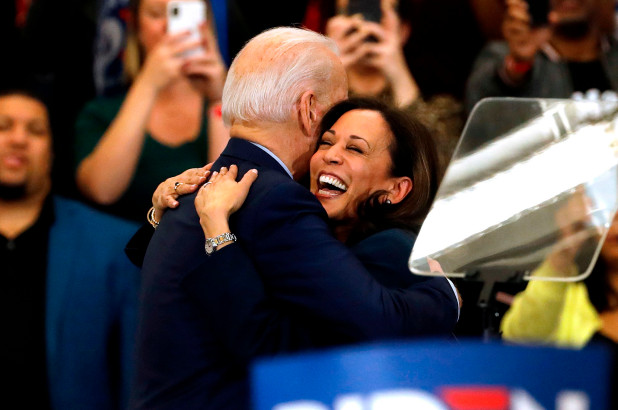 In the past few months, we have seen the biggest uprising in U.S. history against racist police violence. Millions of people have taken to  the streets, and millions more have supported the protests from their homes, afraid to leave due to the coronavirus. Anger has never been so widespread against the institution of the police, with some even calling for the total abolition of police and prisons.

And despite that, Joe Biden has chosen a cop to be his vice presidential candidate: Senator Kamala Harris. Thus for the next months, we are going to constantly hear about what a great step forward this VP pick is for feminism and for the Black community in a clear attempt to quell the anger in the streets and direct it to the ballot box.

Biden seems poised to win the election, polling by as much as double digits ahead of Trump, who is facing a crisis due to his botched response to the coronavirus, which has led to hundreds of thousands of deaths. He faces further discontent due to his response to Black Lives Matter movement, which only served to fuel the flames of the uprising. As COVID deaths rise and the economic crisis deepens, the anti-Trump sentiment is sure to drive some people to the Democratic Party. And certainly, we have to fight against Trump and the Republicans. But looking to the Democrats to counter the racist, anti-working class policies of the Trump administration is a mistake. Neither Biden nor Harris offer an alternative to the pro-cop Blue Lives Matter policies of the Trump administration. In fact, Biden and Harris have been on the front lines of maintaining and protecting the racist police force and brutal prison system. And this VP pick is important: as Biden is about to turn 78 this year, it is likely he will be unable to lead the party for long. So picking Harris as  his running mate is picking her to be a future face and leader of one of the two parties of capital.

Biden’s VP pick comes after months and months of guessing whom Biden would pick to be on his ticket to attempt to get Trump out of office. In one of the last debates, Biden had promised a woman would be his VP pick — a clear attempt to win over #ImWithHer Democrats and the millions of people who have taken to the streets in the Women’s March.

There were several on the short list. One of them, Elizabeth Warren, would have been a sign that Biden wanted to speak to the progressive wing of the party. In fact, Warren raised $7.7 million for Biden since she endorsed him in April. There was Gretchen Whitmer, whose appeal rested on that fact that she is from the Midwest and speaks to a moderate wing of the party. And there was Kamala Harris, who was always a strong contender: a charismatic, younger Black woman who already had a significant public profile after her failed presidential bid. Others on the short list, especially in the past few months, included Susan Rice, who has foreign policy credentials as Obama’s national security advisor and the advantage — or disadvantage — of never having run for office. The murder of Geroge Floyd knocked Amy Klobuchar, who was formerly understood to be at the top of the VP shortlist, out of consideration due to her involvement with the Minneapolis Police Department.

Although Biden has traditionally done well with older Black voters, who delivered him the victory in the primaries, Biden’s segregationist, racist policies might come back to haunt him during the election cycle. Harris, in fact, went after Biden for these very policies during the primary season. As the BLM movement developed, Biden showed himself to be on the side of the cops and police violence. After all, he suggested shooting people in the knees, rather than condemning police violence and brutality. But the selection of Harris is indeed a cheap scoring of political points, as neither Harris nor Biden are on the side of Black lives — much less the Black Lives Matter movement.

Kamala Harris’ record had already come under a lot of scrutiny during her failed presidential campaign earlier this year. Before being elected to the Senate, she served as the Attorney General of California. While Harris touts a “progressive” record in that position, in reality she was “tough on crime” — which means building up the prison industrial complex and terrorizing communities of color.  As San Francisco DA before that, she increased felony conviction rate from 52 to 67 percent in three years. She defended the absolutely inhumane Three Strikes law in California, which means life sentences for many who’ve been convicted of a minor felony. As is often the case with Harris, she later changed her position on this, maintaining the law applied only to people who had prior violent crime convictions — although this does not alter the brutal character of the law.

She spearheaded a “war on truancy” that led to the arrest and prosecution of parents whose children had missed 10 percent of school days — with consequences of a year in prison or a $2,000 fine. The Huffington Post documents: “Two police officers entered a squat townhouse. Minutes later, their cameras began clicking. The officers had re-emerged with a weary-looking woman in pajamas and handcuffs.” This parents’ child had missed 20 days of school. Videos emerged of Harris laughing about jailing parents for truancy.

Harris also argued against allowing trans* inmates to have gender-affirming treatment, and targeted sex workers. She upheld the death penalty in California, appealing a federal judge’s decision that deemed it unconstitutional. In the past, she was against the minor reform of a statewide mandate for body cameras on cops in California.

And of course, there is the Daniel Larsen case. He was sentenced to 27 years in prison for throwing a knife under a car. Witnesses claimed it wasn’t even Larsen, but his court-appointed lawyer called no witnesses. Eleven years later, when the case was thrown out for lack of evidence, Kamala Harris singlehandedly kept Larsen in jail — claiming he’d turned in his paperwork too late. After a grassroots movement got Larsen out of jail, Harris again appealed the decision.

Indeed, memes about Harris being a cop spread around the internet during the campaign, and her controversial record on criminal justice interfered with her campaign in the presidential primaries. That was before the largest uprisings against racist violence in American history began. Given this context, the strategy behind Biden picking Harris is particularly perplexing. The reasoning seems to be based in the most cynical form of identity politics. Biden and his team are hoping that the mere presence of a Black woman on the ticket will be enough to attract the multi-racial Black Lives Matter movement that has taken the streets over the past few months. They appear to hope to replicate what the Democratic party has done for generations: derail social movements by moving them out of the streets and into election campaigns and the Democratic Party itself.

For the movement to fall in line behind Harris, however, activists will have to overlook every political position she has ever held, her entire program, and her entire worldview — all of which are in lockstep with the capitalist state and the racist system of policing it uses to protect its power.

In the midst of the coronavirus crisis, it’s worth mentioning Harris’s position on healthcare. She is for “Medicare for All who want it” — just like most of the establishment wing of the Democratic Party. She’s for maintaining a private, unaffordable healthcare system — already a terrible position before the pandemic, but now, amidst the healthcare and unemployment crises, one that is nothing short of criminal.

Harris joining the ticket also sheds light on the hypocritical and performative heart of the Democratic Party in how it uses the rhetoric of movements and then discards those same movements. Picking Harris is a blatant attempt to co-opt the movement for racial justice and lead it into the Democratic Party. But Harris is no ally of the movement in the streets; rather, she’s just another Democrat who will say one thing and do another. As an example: few can forget Harris’ dramatic attack on Biden’s racist record at one of the Democratic debates when she referenced his opposition to busing and pointed out that she had been personally affected, positively, by policies Biden opposed. That she can call him a racist in one breath and then agree to share a ticket with him in the next shows that the accusations were never truly serious. Indeed, the 2020 Democratic primary campaign in general has shown the Democratic Party for the farce it is. Democrats all try to “out-progressive” one another in rhetoric, freely appropriating the language of social justice, but discard it all at the drop of a hat, again and again — as history has shown. Harris is not now, and never has been, a friend of working-class people of color. Now she’s running with a man she herself described as racist.

The choice of Harris shows, once and for all, Biden’s electoral strategy: build a coalition of establishment Democrats and moderate Republicans. Biden has included precious few points of the Sanders program in his platform and generally rejects policy proposals from the party’s “progressive” wing. Instead, Biden gives us the same thing the Democrats have been throwing at us for decades: diverse faces to mask the racist, imperialist U.S. machine they represent. Once again, we see the failure of the Sanderist strategy of “pushing the Democrats to the left.” It is difficult to imagine a less “left-wing” ticket in the current moment than the author of the 1994 crime bill and the former top cop of California. Yet Sanders was quick to tweet his support for Harris: “She understands what it takes to stand up for working people.”

The solution is clear. The Democratic Party is a dead end.  It will never hold anything for working people or the oppressed. Even the progressive Sanders campaign is now talking about giving raises to cops and congratulating Kamala the cop. This should anger every single person who supported him in the hope he represented real changes. This should make folks question whether the strategy of working within the Democratic Party was ever a good idea. In fact, it should make folks break with the idea once and for all.

The Democratic Party is the party of Joe Biden and Kamala Harris, and no amount of progressive work inside of it will ever make it into something other than one of the twin parties of the U.S. ruling class. We don’t need the Democrats, and we certainly don’t need to Settle for Biden. We need a party of our own, a party based on the real struggles of people in the streets, that runs in elections to build those struggles as part of fighting for socialism.