Joe Biden Is Not a Decent Man

Joe Biden is the presumptive Democratic nominee to face off against Donald Trump in the general election. Bernie Sanders, Elizabeth Warren, and many other so-called ‘progressives’ have endorsed him. Sanders has even gone so far as to call him a “decent man” — but Joe Biden is anything but. 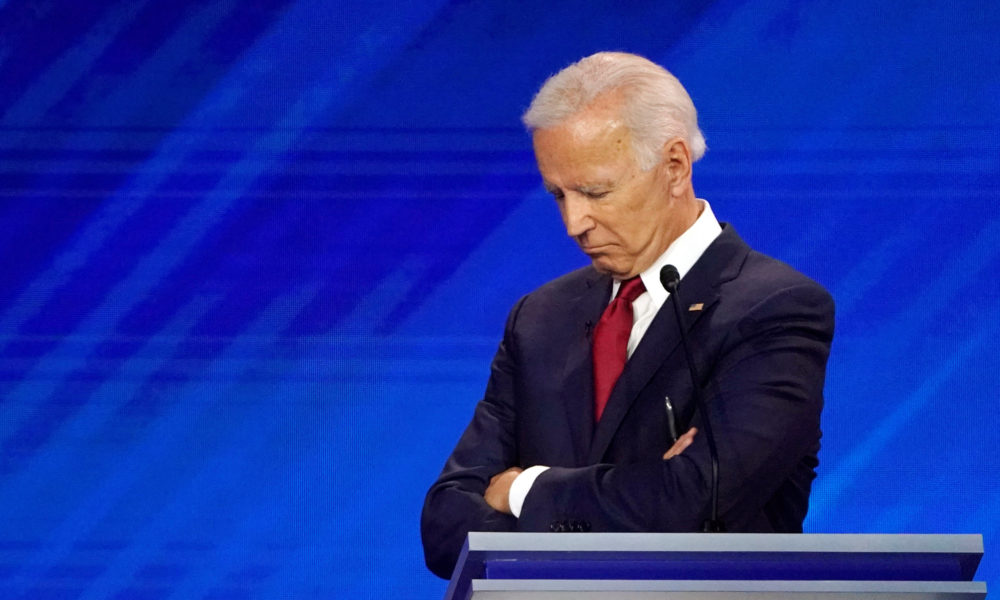 After the longest primary election in history, Bernie Sanders dropped out of the race to be the Democratic nominee last week. This means that, at long last, Joe Biden has become the Democratic nominee against Donald Trump. Joe Biden is among the most right-wing candidates in the Democratic field, with a long record of terrible political positions. Additionally 20% of Sanders supporters say that they aren’t sure if they will vote for Biden in the general. This comes in spite of Sanders calling Biden a “very decent man” and giving him a full-throated endorsement in which he claimed that it was “irresponsible” not to vote for him.

This is creating a situation of great pressures for socialists who are refusing to vote for Biden. The argument that many are making goes that to not vote for Biden is to vote for Trump and, even though he opposes essentially everything that socialists believe in, he is the ‘lesser evil’ and thus a vote for him is to choose the lesser evil and practice harm reduction.

This argument of ‘lesser evilism’ is a common one that is trotted out at every election. But Biden makes the flaws of this theory extremely clear: he is a bigot, an ally to capital, and very much not a ‘decent man.’ He doesn’t deserve our vote and we shouldn’t give it to him. Of course, we socialists are on the front line of fighting against Donald Trump and his imperialism and his anti-immigrant, racist, misogynistic, and anti-LGBTQ+ policies, but Joe Biden, another candidate who will continue U.S. imperialism and oppress the working class and most oppressed, is not not the solution and is also actively opposed to the project of socialism. Voting for him won’t reduce harm. Instead, we need to organize to fight both Trump and Biden.

There are a plethora of political reasons not to vote for Biden as well as serious concerns about his personal behavior. Several women have accused him of inappropriate contact and, recently, one woman has come forward and accused him of sexual assault. Biden leaves these accusations unanswered, even as he postures about his support of women and promises to choose a woman to be his VP. This is the height of hypocrisy and is evidence of how Biden is cynically using liberal feminism to muster support for his campaign.

Moreover, Joe Biden helped create the current economic crisis that is leaving tens of millions unemployed. For example, student debt is becoming so untenable that the Trump administration had to suspend collection for six months — an important measure to help struggling workers — as the coronavirus crisis began to worsen. The student debt crisis was worsened due to legislation that Joe Biden voted for, such as a 2005 bill that exempted student loans from bankruptcy filings, meaning that borrowers still have to pay back their student loans even after they’ve declared bankruptcy. This bill made student loans “very lucrative” to outside lenders because they are one of the only debts that can’t be forgiven.

Biden is now proposing some form of student debt forgiveness, but he still defends the bill that he strongly supported even as other Democrats like Ted Kennedy and Elizabeth Warren were opposed to it. Biden’s economic record writ large is littered with bad position after bad position. He voted for NAFTA, supported the corporate bailouts, and still is opposed to Medicare for All — even in the midst of a pandemic. Indeed, during the midst of the coronavirus crisis Biden has done nothing and hasn’t meaningfully opposed any of Trump’s disastrous policies for handling the crisis.

In addition, Biden has supported policies that have vastly increased the prison population, worsening the overcrowded and unsanitary prison system that is currently being ravaged by the coronavirus. This is just the latest proof that the system of mass incarceration that is practiced by the U.S. is an evil and racist system that disproportionately targets people of color and puts them in unsafe conditions. This system is one that was largely created by the 1994 crime bill that was written by Joe Biden. Indeed, at the time, Biden bragged that “every major crime bill since 1976 that’s come out of this Congress, every minor crime bill, has had the name of the Democratic senator from the State of Delaware: Joe Biden.” This included pushing for mandatory minimums and once declaring “It doesn’t matter whether or not [accused criminals are] the victims of society. I don’t want to ask, ‘What made them do this?’ They must be taken off the street.” Indeed, in 1994, Biden made a speech on the senate floor where he criticized the Democrats for not being tough enough on crime, compared himself favorably to Richard Nixon, and declared “lock the S.O.B.s up!”

Joe Biden created the current form of mass incarceration and was proud of it. This goes hand in hand with Biden’s strident opposition to bussing as well as his eulogy for segregationist Strom Thurmond. It gives a very clear picture: Biden is bad on race and has been for his whole career. It is, however, interesting that Biden, with such a dreadful record on race, was able to command such a strong majority of the Black vote during the primaries. This seems to be largely due to the narrative of Biden being the most electable candidate, Biden’s strong association with Barack Obama — a fact he would often exploit on the campaign trail — and Biden’s support among Black members of the Democratic Party establishment (most notably S.C. Representative Jim Clyburn). Additionally, it is important to note that Black voters under 30 actually tended to prefer Bernie Sanders, which suggests that the generational split that defined the primaries overall also was also at play here.

Biden is also an imperialist. He infamously voted for both the Iraq and Afghanistan wars. On Afghanistan, he went so far as to say that “whatever it takes, we should do it” in reference to the War on Terror in Afghanistan. As the chair (or ranking member) of the Senate Foreign Relations committee, he played a key role in shaping U.S. foreign for decades. He strongly advocated for U.S. involvement in the Balkans in the 90s and pushed the Clinton administration to increase military engagement in Kosovo — he would later call his push to airstrike Kosovo one of his proudest moments.  On Israel, Biden is a self-described zionist and fiercely opposes cutting any military aid to Israel. While a member of the Obama administration, he championed the use of drones. He also served as Vice President while Obama deported thousands of workers without papers. Joe Biden is an imperialist and will certainly continue that as President, just like any other Democrat.

All of this builds to one conclusion: Joe Biden isn’t on our side. He doesn’t deserve our vote just by virtue of being not Donald Trump.

People can be excused for feeling a sense of deja vu around this election. Once again Bernie Sanders has been defeated by an establishment figure with nothing to offer but a return to the status quo. Once again, all of that candidate’s flaws are being painted over and their failure to excite the  electorate is being ignored to, instead, blame the left for not falling in line. But we cannot keep doing this, no matter what Illhan Omar, AOC, and other so-called progressive figures want to tell us. Lesser evilism still leaves us with evil.

Under a Biden presidency, families will still be torn apart through deportation, people will still die in imperialist drone strikes, millions will still suffer and die in prisons, health care will still be privatized, and corporations will still be bailed out. Joe Biden offers nothing for the working class. The same people who will be victimized under Donald Trump will also be victimized under Biden. We won’t be reducing harm, we would simply be consenting to harm done by a different person. Additionally, Biden has made it very clear that he is deeply opposed to the project of socialism, so voting for him will actually undermine our project.

The narrative of a “not voting for Biden is voting for Trump” is one that is used to create a false majority around Biden, implying that Biden already represents about half the country. This then creates a false majority around his program. But the argument that Biden is representative of what a large majority of the country supports is almost categorically untrue. Only about 30% of registered voters are Democrats, and of those 30% only about 30% voted in the primaries this year. This means that, excluding any independents who may have crossed over and voted, Biden won a majority among the 9% of registered voters who actually voted in the primaries. Add to this that a sizable percentage of Americans aren’t registered and that Biden only won about half of the available votes, this puts Biden at less than 4% of support in terms of actual votes. All this is to say that Biden is supported by a minority of people, even within the Democratic Party.  However, by pressuring voters to put aside their political opposition to Biden and vote for him purely because he isn’t Trump, the Democratic Party establishment is attempting to create a false majority around Biden, making it seem like he is more representative than he is. This is the function of the primary system writ large.

This all means that there is a base of people who are not represented by either Trump or Biden. This is where we need to build our working class party. For example, the reforms that Bernie Sanders was proposing — such as Medicare for All and Student Debt Forgiveness — have a base of support that goes beyond either Biden or Sanders. Even if Biden has a base of support within the Democratic Party establishment, that doesn’t mean that he has public support for his program. Around 50% of Americans support Medicare for All. All of his means that for half of voters in the U.S., there is no candidate who is proposing the health care program that they support.

We don’t owe Joe Biden anything. We don’t owe it to him or the Democratic Party to support them in the general election. It is not a moral dilemma. Instead of giving our support to a party whose program we disagree with, we need to build a party of our own, a workers party committed to socialism. The coronavirus crisis is laying bare the contradictions of capitalism and is opening the minds of people to new ideas. Since the crisis began we have seen an uptick in class struggle with workers walking off their jobs to demand better working conditions and workers at General Electric demanding to shift production away from airplane parts to the much-needed ventilators. Health care workers are making national news with their protests against the for-profit health care system. The working class is awake and is becoming increasingly combative. Now is not the time to settle for half-measures and a ‘lesser evil,’ now is the time to organize and fight for a future we actually want.