Joe Biden’s Arab-American Agenda Is an Insult to Arabs

Joe Biden wants to act like he’s on the side of Arab-Americans. Don’t believe him. 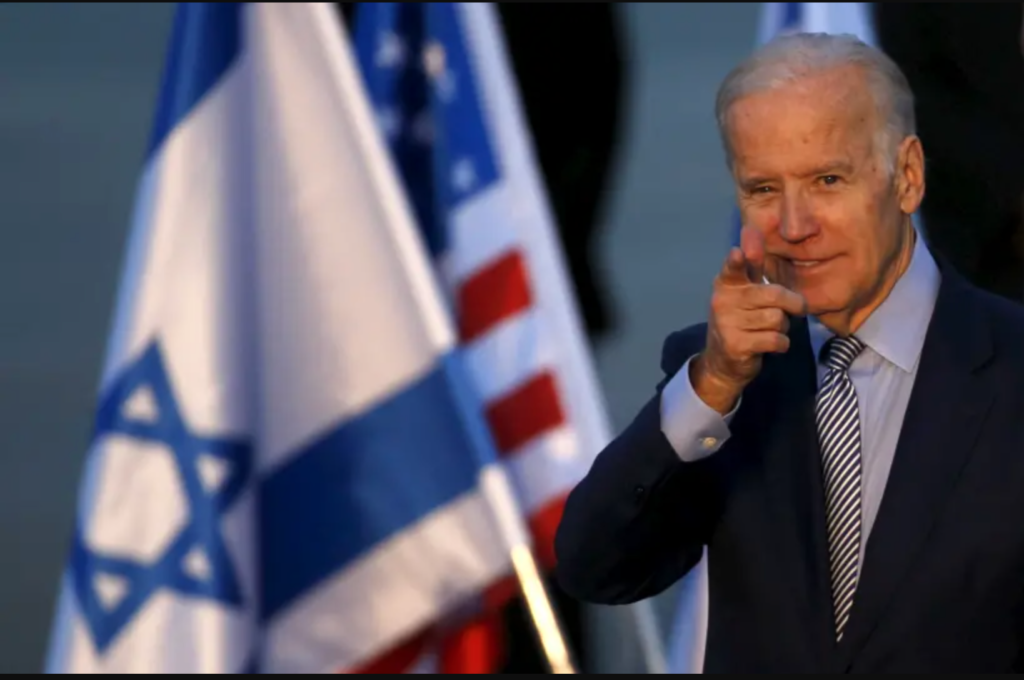 Joe Biden has released a document titled “Joe Biden and the Arab-American Community: A Plan for Partnership”. He vows to fight bigotry in  and support Arab-Americans by fighting against anti-Arab rhetoric which has been used to marginalise, exclude and dehumanise the Arab community. He promises that the Biden-Harris administration will hold government officials accountable for using such rhetoric.

But Joe Biden is no friend to Arabs or Arab American workers from bombs in the Middle East and enacting policies against Arab refugees, to his policies on Palestine, Joe Biden, like Democrats before him, is a representative of capitalist interests and will continue to implement a violent, imperialist foreign policy in the Middle East.

A Record of Bombs

Anti-Arab rhetoric is unacceptable in Biden’s books, but bombing Arab countries is fair game. Just a quick look at his record over the years shows that Biden’s entire campaign is insulting to Arabs and refugees. He played a large role in creating millions of refugees by pushing for the disastrous war in Iraq along with former U.S. President Bush. As VicePresident he assisted Obama in bombing seven countries. Iraq, Pakistan, Somalia, Yemen, Afghanistan, Libya, and Syria. He also helped to expand AFRICOM in Africa. Obama authorized over 10 times more drone strikes than Bush; his administration dropped three bombs every hour, 24 hours a day, in 2016 alone (a total of at least 26,171 bombs), all with the support of Biden who is now pledging to end “forever wars” as the future President of the United States.

Bombing Arab countries does not just affect the Arabs in target countries but it also has damaging effects for Arabs in America. Dropping bombs in these regions feeds into the “War on Terror” narrative that claims that these Arab countries deserve to be bombed because terrorists reside there. Just as there is no clear legal distinction between combatants and civilians when dropping bombs, the distinction between Arab-Americans and terrorists has faded to the point where speaking in Arabic in America feels like a crime. Arab-Americans are subjected to humiliating airport checks for looking “suspicious, or in reality, for looking like or being an Arab. In addition, finding a job, maintaining it, and securing a decent wage with an Arabic sounding name or an “Arab appearance” is difficult for many Arabs living in America. Biden’s long-standing record of supporting the bombing of the Middle East for U.S. capitalist interests has in fact contributed to the systematic discrimination against the same Arab Americans he claims to protect.

Of course, Trump is no friend to the Arab community either. He has openly admitted to deploying more troops around oil fields in Syria in order to steal their oil, which has undoubtedly caused the suffering of millions of Syrians. But though Biden has a habit of painting Trump as someone who ostracizes Arabs Arabs, it is clear that Biden is no different. He has already stated that U.S. troops will remain in Syria.

Conveniently there is a national amnesia when it comes to Biden’s record. Throughout his career he has consistently harmed the welfare of Arabs and now he is using Arabs as his poster children to win election points.

Even the very first page of Biden’s “Plan for Partnership” highlights just how empty the Biden-Harris Administration’s promises are. On day one Biden promises to rescind the Muslim and refugee travel ban and stop the family separation policy. However, this ban was originally executed by the Obama Administration in 2015 under the Visa Waiver Improvement Program and Terrorist Travel Prevention Act. The law blacklisted anyone who was from Iraq, Iran, Syria, Yemen, Sudan, Libya and Somalia. In 2011, the State Department under Obama also issued a six month ban on refugees and so this ban under Trump is nothing new. Trump has taken these laws and extended the travel ban to include Nigeria, Myanmar, Eritrea, Kyrgyzstan, Sudan and Tanzania. Biden supported a law which clearly profiled nationals of particular countries and perpetuated the narrative that Arabs are more prone to radicalisation and to commit terrorist acts, the very same narrative thatBiden now suddenly promises to combat.

Biden has been unequivocal in his opposition to the peaceful Palestinian-led Boycott, Divestment, Sanctions movement, or BDS. This movement calls to boycott, divest from, and sanction Israel in opposition to its U.S.-supported project of occupying Palestine.Many Arabs identify with the plight of Palestinians and support their resistance to the Zionist occupation because Arabs from other countries have been under the weight of imperialism too. The idea of Arabs uniting together to kick Trump out and vote Biden goes against this common struggle. Trump is surely invested to the neck in Zionist affairs, but Biden is no different.Supporting Biden means supporting Zionism.

Though the Democratic Party is quick to call any crticism of Israel “anti-Semitism,” this is nothing but a cheap attack to silence political dissidents and protect the U.S.’s profitable relationship to Israel. The Democratic Party receives ample funding from the Zionist lobby, and in return, the Democrats and Republicans continue to prop up the apartheid state of Israel, which then in turn defends U.S. interests in the Middle East.

Biden’s Arab-American Agenda promises to root out systemic racism and protect the right to free speech, but in practice this is completely contradicted by his support of a law which silences BDS and in doing so, also silences businesses, organizations, and individuals in 27 states that advocate for a boycott of Israel. The message is clear. If you are an Arab that has something to say that does not fit in with the U.S. imperialist agenda, you can forget your First Amendment right.

But Biden is not the only person on the Democratic Party ticket who is no friend to Arab-Americans. Kamala Harris is a strong supporter of AIPAC which is an U.S.organization that advocates for strong U.S.-Israel relations. She has had secret meetings with Netanyahu and even criticized Obama for not being tougher in defending Israeli settlements. Even when Bernie Sanders proposed an amendment to cut 10% of the Pentagon’s $740 billion military budget, Harris voted against it along with the Republican opposition. Those savings could have been invested in healthcare, housing, and education in impoverished communities in the United States,but like Trump and those in office before him, Harris and Biden prioritize continuing the U.S’s imperial legacy and waging wars in Muslim majority countries and Arab countries.

Both Harris and Biden support and fund an Israeli occupation that kills, dehumanises, and expels Arabs every day. Biden’s pledge to “ensure that Palestinians and Israelis enjoy equal measures of freedom, security, prosperity, and democracy” is set up to fail already. U.S. foreign policy does not treat Palestinians and Israelis equally and under Biden it will remain that way. His Israel-Palestine two-state solution is a delusion. He knows that this “solution” is not viable, but given that there is increasing criticism of Israel from sectors of the Democratic Party base, he has to have something on the table that makes it look like he considers both sides. In reality, however, such a doomed plan would change nothing for Palestinians.

Arab-Americans shouldn’t look at Biden wide-eyed and full of hope. He is full of false promises just as he was in the Obama administration. Most Arab-Americans will have flashbacks to the failed promises of closing Guantanamo Bay, stopping the war in Iraq and Afghanistan, and putting an end to mass surveillance; instead all they got was the expansion of these things, along with the initiation of more wars in Arab countries.

No Support for Imperialists

Biden is reaching out to Arabs to pull in votes and he knows how to. Even his cynical use of the Arabic word “Insha’Allah” meaning God willing during the first presidential debate in response to Trump’s promise that the public will see his tax returns was a purposeful marketing scheme. Being of Arab descent myself I found Biden’s use of the phrase quite amusing, but it did not blind me to the fact that this was a ploy to reel in Arab voters, making them feel “seen and heard”. Many on Twitter jumped on the “yes we stan Biden” train without a second thought of his political record just because he used an Arabic phrase. But Biden, like the Democrats, in general use liberal identity politics and pay lip service to oppressed groups to obfuscate the fact that they are a capitalist party that oppresses and exploits workers all over the world.

The narrative that Biden, who served under a “better” former U.S. president, will save the country still plagues the American psyche. Indeed, by no means is Trump’s America “great”. White supremacists have certainly been emboldened in the country and his administration has dropped more bombs and missiles than George W. Bush or Barack Obama did in their first terms. But because of all of the controversy and anger Trump has stirred during his time in office, Biden has managed to pull the wool over people’s eyes, especially those from marginalized communities, including Arabs, most of whom are already sick of Trump. Many people are convinced that voting Trump out and pulling Biden in will cure the ills of the nation and are quick to zealously support Biden and forget his political record because he is not Donald Trump, but neither candidate is a real choice for the international working class that suffers under the boot of U.S. imperialism.