Joker: The Despair of Capitalism and the Hope of Riots

All the critics hate “Joker”: They denounce it as a film without a message, or one that will inspire right-wing terrorists. What movie were they watching? In reality, the message couldn’t be clearer: Working people need to direct their anger against the rich. 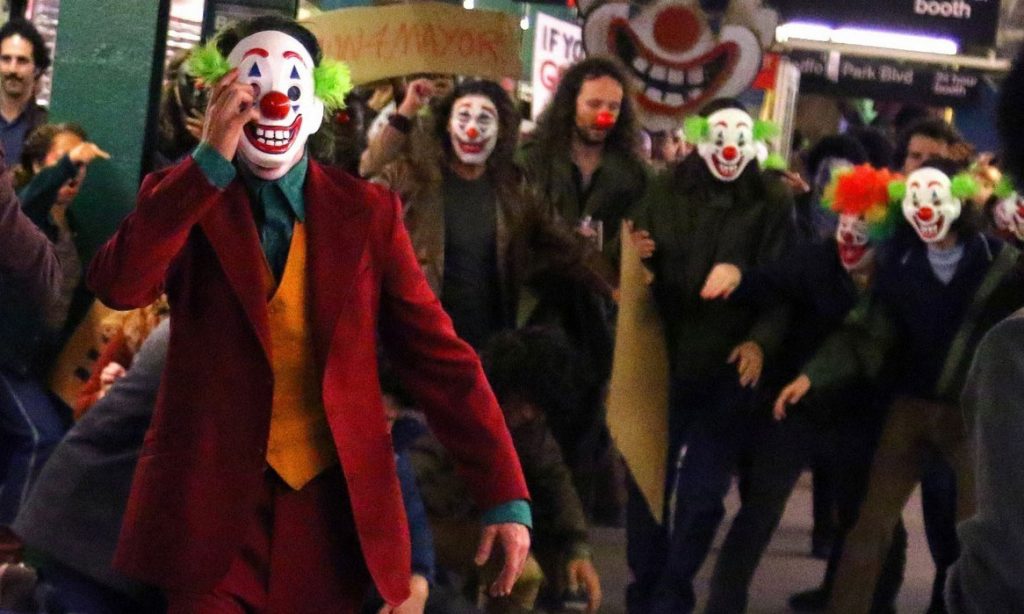 Joaquin Phoenix as Joker: ready to riot. Picture: Still from a leaked video of the shoot.

“Joker,” in the words of its main character, is a movie about a “mentally ill loner” and a “society that abandons him and treats him like trash.” Arthur Fleck suffers endless deprivations in a capitalist metropolis: He barely survives doing precarious work as a clown. He has been locked up in a psychiatric prison. He has to care for his disabled mother in a decrepit apartment. And now, his mental health services are being eliminated due to budget cuts.

Arthur’s rage at his situation leads him to become a murderer, and eventually, as we know from the larger Batman canon, a costumed supervillain. But “Joker” is really only tangentially related to the superhero stories. The movie takes place in 1981 in New York City—there are only occasional references that this is supposed to be “Gotham.”

The film was preceded by scandal: Is this a glorification of violent incels and angry white men? The theater I went to in Brooklyn had an armed police officer stationed at the entrance.

Richard Brody, writing in the New Yorker, has described the film as racist. It is certainly an unfortunate choice that the opening scene shows Arthur, working as a street clown, brutally attacked by five youths of color—an old racist trope of Black youths attacking an innocent white person. The scene was not referenced again and stands in contrast to the messages of working-class solidarity across racial lines.”

But this scene has little relevance to the rest of the film. Arthur’s transformation into a working-class vigilante begins when he is accosted by three investment bankers on the subway. He correctly identifies the people responsible for his suffering: wealthy men in suits. Arthur’s downtrodden social worker is a Black woman. But rather than implying any contradiction between the two, she serves up unadulterated class consciousness: “They don’t give a shit about people like you. And they really don’t give a shit about people like me.”

Rage like Arthur’s can so easily be misdirected against marginalized groups: immigrants, women, queer people etc. This film, however, goes to great lengths to show who the real villains are. The plutocrat Thomas Wayne, the richest man in the city, begins a campaign for mayor by expressing his contempt for poor people, calling them “clowns” who could not make something of themselves. Soon, protestors in clown masks are ready to riot in front of a gala at Wayne Hall.

What Movie Were They Watching?

Numerous critics have called the film “shallow” or “hollow,” claiming it has “nothing to say.” Vice gloats that Joker is “terrible,” based on “brutal” reviews.

What movie were these critics watching?

Far from having “nothing to say,” the film is, if anything, far too on-the-nose with its propaganda against the wealthy. When Arthur takes the train up the Hudson Valley (sorry: Gotham Valley), a tracking shot shows that every passenger is reading a newspaper with the headline “Kill the Rich.” One sign even says: “If you think GREED is bad, wait until you hear about CAPITALISM.”

Seldom have the class prejudices of professional critics been more obvious. “Joker” is in fact fulfilling a hugely progressive role by emphasizing the line that divides liberal elites from oppressed and angry workers. This may help to explain why, as Vice grudgingly concedes, audience reception to the film “thus far has been much, much more positive” than the critical response.

Arthur ultimately turns to individual violence against people who have wronged him—a totally reactionary solution. But the film does not present this as inevitable. Almost coincidentally, Arthur drops into the mass of rioters in front of Wayne Hall—he has inspired them but is just barely aware of the movement. As they chant slogans against Wayne, Arthur pumps his fist and basks in the righteous rage. In this brief moment, we see the antidote to his searing loneliness. Arthur, unfortunately, ducks out of the crowd to confront Wayne on his own.

Batman has always been an incredibly reactionary story, presenting the wealthiest man in the city as the only one who can secure justice. Heath Ledger’s Joker from “The Dark Knight” (2008) appeared as a force of nature, denying us any insight into the character’s inner life. He was a man who “just wants to watch the world burn.” This was just a boring reflection of the imperialist ideology of the Bush years. Terrorists, we were told, were not motivated by imperialist crimes in the Middle East. No, they were simply “evil,” “hated freedom,” etc. Batman, in order to stop them, needed to use torture and illegal mass surveillance—just like the CIA.

The next film in the series, “The Dark Knight Rises” (2012), was even more reactionary. Director Christopher Nolan based his villains on both the Occupy movement and the sans culottes of the French Revolution as the villains. Batman was able to defeat them alongside white-gloved police. This most recent Batman film was essentially a fantasy about the French aristocracy defeating the revolution. As with nearly all previous Batman stories, Nolan’s films offered a conception of “justice” based consistently on the interests of the wealthy. The class implications are clear, even if the Waynes often seem more closely to resemble landed gentry than modern capitalists.

“Joker,” by contrast, will make any working-class viewer giddy about the prospect of beating that proto-fascist Batman. We had always heard that Bruce Wayne’s father was killed in a robbery—what if, instead, it was an act of revenge for his years of exploiting Gotham’s workers?

In other ways, too, “Joker” turns the reactionary narrative of the Batman franchise on its head. Even though Arthur Fleck ends up committing horrible crimes, it’s clear he was not born as a criminal, but rather driven insane by a criminal system. The film shows him, at least in these early phases, inspiring broad masses to fight back against their oppression. When the police are pursuing him through a packed subway, they shoot an innocent bystander. The crowd, wearing common symbols and thus recognizing their collective power, easily overpower these murderous cops and exact revenge. The clown masks might look silly—but who can watch this without thinking of the Yellow Vests challenging state power in France?

The film “Joker” has many weaknesses. The role of Zazie Beetz as Arthur’s neighbor is underdeveloped and predictable. Robert DeNiro, while offering an impressive nod to “Taxi Driver,” from which this film draws inspiration, mangles every scene he is in with an implausible performance. And even the lovely scenes of riots are tainted by the fact that the rioters appear to be exclusively men (whereas every insurrectionary movement in the modern world had women in the front row). This is, after all, a film made for 60 million dollars—it could not escape from the imagery of the “evil mob.” Nonetheless, Joker reflects how consciousness is changing. in the United States. As the social crisis deepens, we can expect more movies like this.