Last Friday, Left Voice held a launch party in New York City for its fourth print issue. The event was standing room only as speakers spoke about their experiences as socialists in the class struggle, fighting the union bureaucracy and the need for the political independence of the working class. 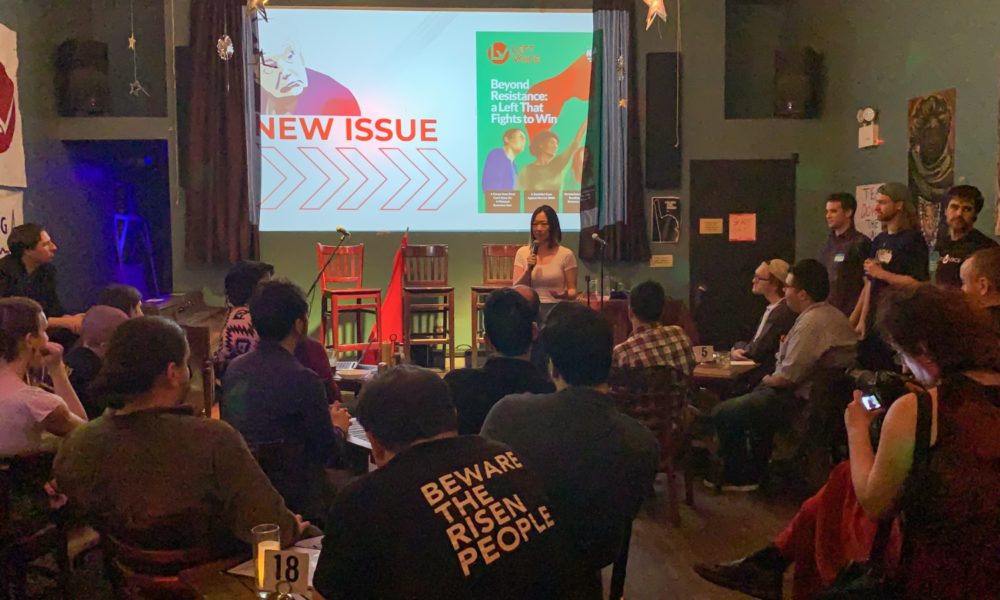 On April 6th, Left Voice held a launch event in New York City to celebrate the publication of our fourth issue. The event featured reports from “7K or Strike” at CUNY,  an update from a revolutionary nurse at the center of NYSNA’s contract negotiations, and a message of solidarity from a UNITE-HERE worker leader from Stamford. Julia Wallace, a member of Left Voice and an organizer with the Inglewood Affordable Housing Campaign in Los Angeles, emceed the event, which drew over 70 people.

The attendees spilled out of the back room of a Brooklyn bar and into the bar itself,  where they sipped on the special Left Voice cocktail called “The Permanent Revolution” as they listened to the impassioned speeches. Cheers and applause were common as speakers shared details of the different labor struggles going on in and around New York City.

Left Voice speakers reaffirmed our commitment to class struggle by giving a platform to workers who are taking on leadership roles in their respective struggles. Tre Kwon, a member of Left Voice and a nurse, summed up the interconnected nature of working class struggle: “Safe Staffing or Strike [the slogan of  the Nurses’ struggle] may sound a lot like 7k or Strike [the slogan of the City University of New York labor struggle], and that’s not a coincidence.” Pro-strike activists in New York State Nurses Union (NYSNA) and the Professional Staff Congress (PSC) have drawn inspiration from each other, organizing bottom-up structures of workers’ power that have run up against entrenched union leaderships. While large numbers of nurses and academic workers are ready to fight, the leadership in each union is intent on preventing militant mass action.  Left Voice stands with the most class-conscious and combative workers who are fighting to reclaim the unions as “schools of war.”

A central theme throughout the evening was the importance of working-class self-organization: democratic structures independent from union bureaucrats, bosses, or politicians. In both NYSNA and the PSC, the power of the union membership is being held back by top-down leaderships structures that concentrate power in the hands of conservative elements. Left Voice speakers declared their support for mass assemblies and rank-and-file control over all aspects of the labor movement.

The launch event reflected Left Voice’s commitment to class independence for the working class and uncompromising solidarity with the struggles of oppressed people everywhere: workers, women, immigrants, black and brown people, LGBTQ folks, and anyone oppressed by capitalism. A hotel worker from Stamford earned loud applause when he declared that, in order to organize in the working class, “you have to have two things: you need to have angry workers and you have to tell them the truth.” Be it affordable housing in LA, hotel labor in Connecticut, or nurses in NYC, Left Voice will continue to tell the truth and amplify the voice of the rank-and-file members of the working class.

Julia Wallace explained that Left Voice is part of an international effort to build revolutionary parties around the world. As part of an international news network put forward by a host of organizations affiliated  with the Trotskyist Fraction, Left Voice is an increasingly influential voice in a renewed U.S. left, advancing the need for a working-class, anti-imperialist left. The revolutionary left needs to be rebuilt–Left Voice is a militant effort at the service of that goal.