Everything you need to know about the strike in France and the revolutionary socialist intervention. 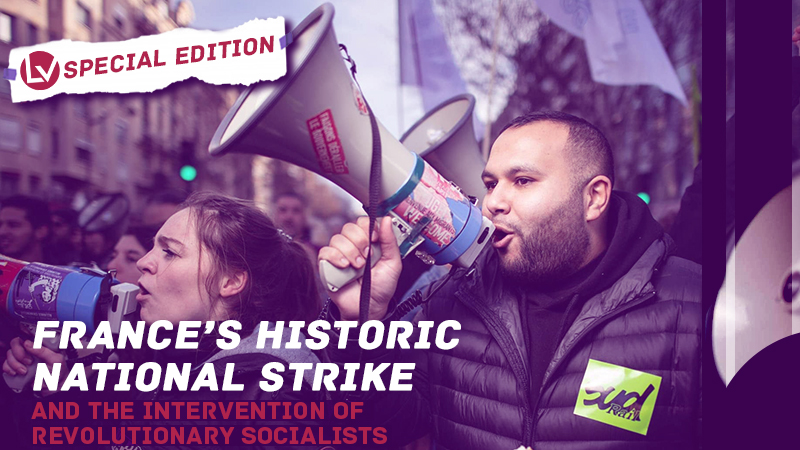 Today in France the working class is fighting one of its biggest battles in recent history. The current period of struggle began in 2018 with the rebellion of the Yellow Vests and continues today with almost 50 days of strikes, picket lines, and mobilizations against Macron’s proposed neoliberal pension reform. This is the longest strike since May 1968 and the longest railway strike in France’s history.

The class struggle in France, once again, is marking a new moment for the labor movement, and its significance goes far beyond its borders, as is evidenced by the yellow vests that have appeared in crowds of protesters around the world. What are the main characteristics of this newest phase in France’s uprising? What contradictions and crossroads are appearing in the movement? And what is the role of socialists in this process? In this special edition—which we are publishing simultaneously with similar supplements in the international network La Izquierda Diario in Spanish, Portuguese, and German—we aim to answer these and other questions and characterize the prospects of the movement as it enters a pivotal phase.

This article describes the current political situation in France and how the strike has unfolded since the new year began.

What the Revolutionary Communist Current—Left Voice’s sister organization in France—is and how it is intervening in the struggle.

Read about the prominent intervention of the union rank and file in the strike, and the new workers’ and socialist leaders like Anasse Kazib who have emerged in the heat of this struggle.

An interview with one of the leaders of the Revolutionary Communist Current about the intervention of the socialists in the strike.

An analysis concerning the current situation in France written by Juan Chingo, editor in chief of the French website Révolution Permanent.

The Yellow Vests: Rumblings of a Coming Storm

This article, written by Madeleine Freeman, Left Voice’s editorial board member, explores the Yellow Vest movement and it’s connection with the current strike.

The piece explains why the yellow vest movement opened a new period of class struggle in France and internationally.