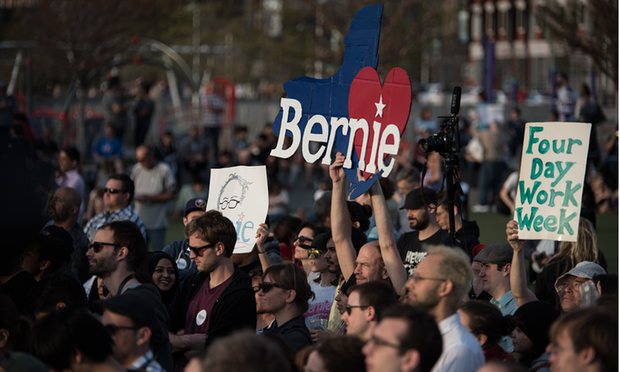 Twelve million people voted for Bernie Sanders during the primaries. Thousands of youth joined his campaign, phone banked and door-knocked for him. A real grassroots movement sprang from the fertile soil of a deep social crisis and demands long overdue. Where will all of Sanders’ supporters go now, with his endorsement of former rival Hillary Clinton? Moreover, what does he propose to his base, in order to move forward and win the demands outlined in his program?

People who worked on the Sanders campaign believed he would champion their demands: a higher minimum wage, the cancellation of student debt, a solution to economic inequalities, the end of institutional racism.

Now, this boat packed with enthusiastic supporters has been handed over to a new captain: a former rival with whom he was diametrically opposed. Within days, we’ve seen the growth of mutinous fits, and some of the crew are jumping ship.

This article is an attempt to propose a way forward.

To be fair, Sanders was clear from the beginning, stating he would endorse Clinton if he were to lose the nomination. There was no reason to believe this would not be the case.

There were those who hoped he would win the nomination, some who hoped he would change his mind somewhere along the campaign trail and break with the Dems. These hopes were no doubt fostered by Sanders’ repeated denunciation of the “rigged electoral system,” the unfair maneuvers (to put it gently) and general boycott played against him by the Democratic Party establishment.

The channels and cogs of this sham formal democracy come with a lifetime guarantee for people in power to subdue, repress, accommodate, co-opt, and make partial concessions.

But he remained loyal to his principles and threw his full support to the preferred candidate of the American capitalist class. And by principles I mean those pillars of bourgeois democracy that he has reinforced and respected throughout his political career .

Under bourgeois democracy, people starve while bosses amass millions, and laws protect the latter’s “private property” over the former’s right to food and housing; government officials are funded by the rich, and workers’ demands go unheeded.

The channels and cogs of this sham formal democracy come with a lifetime guarantee for people in power to subdue, repress, accommodate, co-opt, and make partial concessions. The fact that Hillary Clinton has secured the presidential nomination despite her record-breaking, dismal ratings is proof of this.

The electoral-democratic path will never be a tool for radical social transformation, because the very rules of the game are designed to maintain the status quo.

Never in history has socialism been achieved through gradual reforms. Social democratic parties around the world have long since abandoned the perspective of ending capitalism. Instead, they have accompanied the bourgeois parties in their neoliberal turn. This is the case of the Socialist Party in France, the Labor Party in the UK, the PSOE in Spain, and the PASOK in Greece. They are the parties that, once in government, have themselves implemented the neoliberal policies. When the Greek coalition Syriza broke onto the political scene, many on the left worldwide became enamored with what was a renovated version of the reformist left. Only a few months after taking office in 2015, the Syriza government capitulated to the Troika and implemented the same harsh austerity policies they had pledged to fight.

There can be no illusions in an electoral road to socialism.

From the outset, Bernie Sanders has embraced the example of social democracy and his rhetoric of “political revolution” has only challenged the status quo in the terrain of the ideas.

The fight for ideas is important, but ideas alone don’t bring about real change. Any radical transformation of society has always been accompanied by mass mobilizations. Far from encouraging the active mobilization of workers, youth and oppressed minorities, the Sanders campaign has fostered illusions in the electoral system. It has served to bolster the Democratic Party and government institutions like Congress and the White House. It is no coincidence that as the electoral circus took center stage, street mobilizations gave way to presidential rally disruptions, appeals for electoral platform adjustments, and even private meetings with candidates.

This is not to say that revolutionaries should not run for electoral seats, or participate in Congress if they secure enough votes. Congressional positions can be used as a loudspeaker for revolutionary politics: to call attention to working class demands, amplify workers’ struggles and social movements and especially to denounce the farce of bourgeois democracy. But there can be no illusions in an electoral road to socialism. For any revolutionary enterprise, the working masses must be mobilized and organized–this is where a working-class revolutionary party plays a key role. Therefore, any political project that discourages the power of direct action and seeks to channel the discontent and rage through institutional channels plays a counterrevolutionary role. With this understanding, we have opposed and denounced Sanders from the beginning.

For months, Socialist Alternative’s main focus has been on the #Movement4Bernie. With Sanders now shepherding his base into Clinton’s camp, what is the SA’s explanation for putting militant forces into the Sanders campaign? Were they under the illusion that Sanders would not end up endorsing Hillary? Or were they planning all along to direct his voters to the Green Party? This flip-flopping is caused at best by short-sightedness, at worst, by an electoral opportunism that underestimates its own base and supporters.

Socialist Alternative has demonstrated its willingness to cross class lines. Kshama Sawant’s latest statement makes one wonder if such a line exists or carries any meaning for them: she makes no mention of the working class, and instead the proposal to build a nebulous “party of the 99%” is repeated ad nauseam.

They have now switched to supporting the Greens, a petty-bourgeois party that has made alliances with the right, defended imperialist and capitalist policies, and even sabotaged its own candidacies by calling its base to vote for the Democratic Party. “Such twists and turns are possible because the letter , in which she lavishes praise on Sanders for what he has accomplished (save his endorsement of Clinton) demonstrates the narrow limits of this cross-class political formation.

There are other options for socialists who want to cast their vote along class lines this November.

Going beyond Sanders’ surrender, into the streets

The movement against racist police brutality saw an uptick after the murder of Philando Castile and Alton Sterling. Mobilizations are happening in all major cities across the country. The best way to fight for justice and push for an end to racism is to organize and join the protests.

Protests across the country against racist killings by police.

Some sectors of the movement are beginning to advance the idea of a strike against police terror. This means utilizing the leverage we have as workers to demand justice for Black people killed by police. Workers who are part of a union can and should fight for their unions and the AFL-CIO to expel cops from these working-class organizations. History and everyday experience shows that workers and cops have opposed interests.

A teacher’s place is also in this struggle against racist policing. There is a lot that can be done in schools to prevent racist policing. Notably, kicking cops out of classrooms, off school campuses, and fighting the unequal and discriminatory penalization of Black students and children.

Mobilizations are happening in all major cities across the country. The best way to fight for justice and push for an end to racism is to organize and join the protests.

Another important demand among Sanders’ supporters was the $15 nationwide minimum wage. Hillary has already shot down the $15 minimum wage, so there is no use in waiting for her (or Trump, for that matter) to bring it about. Workers in low-wage jobs can organize around this demand and exhibit their collective strength through strikes, demonstrations and other forms of direct action. The fight for a $15 minimum wage has received strong support from students, other workers and political activists.

Last September, thousands of students took to the streets in what was called the Million Students March to protest extortionate student debt and demand free tuition. Noteworthy, they also demanded a $15 minimum wage for university workers–a demonstration of solidarity that, if further developed, could build a powerful alliance between workers and students. A significant portion of the most active students organizing on campuses supported Bernie Sanders and are likely bitterly disappointed with the current impasse.

The answer is clear. Don’t wait for a new politician to speak for you or bring your demands to Congress. Electoral politics have a very limited utility. We must build political forces independent of the two ruling-class parties, independent of the capitalists, and capable of raising a political program that fights for the interests of the oppressed and working class. There is no time to lose: take to the streets and join the protests, organize at your workplace, at schools, and universities and fight for a socialist revolutionary program. Nothing less.