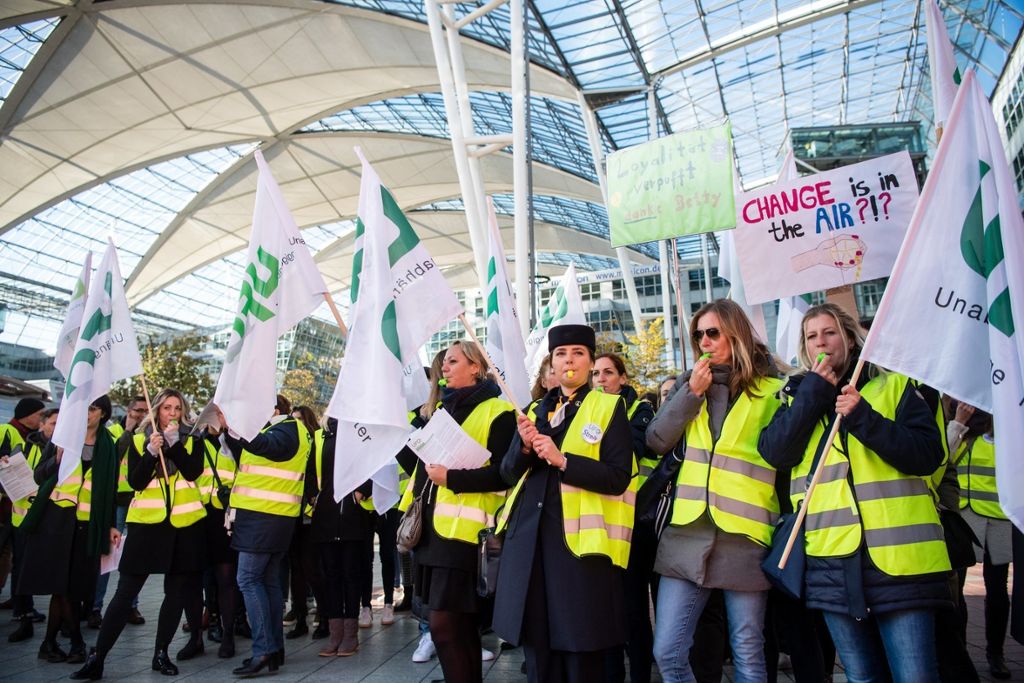 With their warning strike on Wednesday, July 27, Lufthansa workers have demonstrated their power. Now they must resist pressure from the media and the company — because the union’s wage demand is the minimum, given inflation in Germany.

Whenever there is a strike at German airports, the media focuses on the same old question of how many travelers won’t get to take their vacations. They look for the dramatic individual stories they can report. As is often the case, the Bild tabloid stood out as particularly vile, writing that Frank Werneke, head of the ver.di trade union, is waging an “ice cold strike against the vacation happiness of his own people.”

But as with all strikes, it is not the workers or their unions who are to blame. It’s the bosses, who leave them no choice but to strike for their rights.

Media efforts to direct the anger of travelers at the strikers doesn’t always succeed. On ZDF’s Morning Magazine show, a traveler at Frankfurt airport described her plan to take her godchild to Malta as a graduation gift — a trip that would now likely be canceled. Nevertheless, she declared, “I’m fully behind the fact that the staff is on strike.”

According to ver.di, some 5,000 airport ground workers took part in the walkout, which lasted until the early hours of Thursday morning. Lufthansa had to cancel more than 1,000 flights, mainly in Frankfurt and Munich. The union is demanding a wage increase of 9.5 percent and a collective agreement lasting one year. So far, the bosses want to lock that increase in for 18 months —which, given continued inflation, is completely unreasonable.

So, the workers had no choice but to walk off the job. Peter Schmidt, spokesman for the shop stewards at Munich Airport and a member of both the works council and the bargaining committee, spoke to Klasse Gegen Klasse and said of the strike, “It’s the only way we can have our demands taken seriously.” Workers haven’t seen a wage increase for three years, he explained, while there has been inflation during the entire period.

“In real terms, we’ve already lost wages,” he continued. “That’s why everyone has to make sure they get their money and can pay their rent.” In the Munich area in particular, people in lower-wage jobs are starting to have to weigh whether to pay the rent or buy food.

Given all the media pressure, it is all the more important that the entire Left and the trade union movement support the strikers. In Munich, a solidarity delegation from the University and Research Section of the Education and Science Union (GEW) visited the strikers at their rally.

Strikes in the transport and logistics sector are not only happening in Germany, where dockworkers are fighting at the seaports. British railroad workers are engaged in a bitter struggle for higher wages and better working conditions. French, Belgian, Portuguese, Spanish, and Italian airports have also recently seen work stoppages. The question is whether we are in for a summer of discontent or a hot fall.

This power of workers in key strategic sectors must not be allowed to fizzle out. The ver.di negotiator for Lufthansa ground staff, Christine Behle, has already announced on ZDF that there will be no more warning strikes until the next round of negotiations on August 3 and 4. This is not just the typical hesitancy of the union bureaucracy, which does not want to bring the full force of the rank and file to bear; it is just as much a concession to the public pressure against the strikers stirred up by the media.

An effective countermeasure would be to combine the collective bargaining rounds at the airports and at the seaports (also led by ver.di) with big demonstrations against inflation that reach far beyond the striking sectors. “Stop the inflation monster!” is ver.di’s slogan for the port strike. It would bring lots of people into the streets, who in turn would strengthen the strikes.

First published in German on July 27 in Klasse Gegen Klasse.