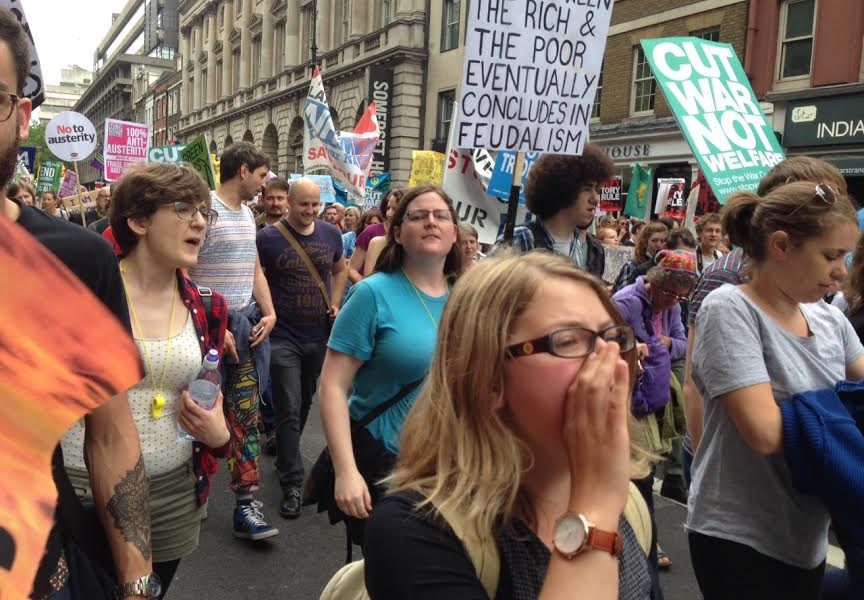 The protests are a sign of the anger of workers, students, youth, pensioners and immigrants at years of austerity and policies that only benefit the rich. The Conservative government is embarking on a new round of brutal austerity measures following its victory in the May 7 general election.

Since then hundreds and sometimes thousands of people have joined anti-austerity protests in different towns and cities around the country. Seven female sixth-form school students in Bristol organised a four-thousand strong march just days after the election. They started a Facebook group to organise a protest against austerity and “to get the Tories out” which attracted support from broader sections of the community.

In the following weeks, nearly 1,000 marched in both Cardiff and Sheffield while 2,000 took to the streets in Manchester. Thousands joined a number of militant protests in central London on May 30, including the first demonstration since the election by UK Uncut, the grassroots direct action group. Students and activists gathered in Trafalgar Square and brought traffic to a standstill in opposition to Cameron’s planned spending cuts, unfurling a 20-metre banner which read “£12bn more cuts – Austerity is a lie”.

Last Saturday, a huge crowd of demonstrators from across England and Wales gathered in the City of London financial district in front of the Bank of England for the march across London to Parliament Square, carrying banners and placards which read: “No cuts”, “End austerity now”, “Austerity kills” and “Fight for every job!” Thousands of people joined a similar demonstration in Glasgow organised by the Scottish Trades Union Congress and the People’s Assembly Scotland.

With a Conservative majority government in office that intends to deepen the attacks on public services, introduce more anti-union laws and continue with its mission to dismantle the welfare state, the demos and direct action come as no surprise. These new cuts of £12 billion come on top of the £25 billion cuts made during the previous Tory-Liberal Democrat coalition government.

As only 24%of the population voted for Cameron’s government, there is no popular mandate for the cuts. The NHS and public services are in even greater danger from cutbacks and privatisation as the government uses austerity as an excuse to hand over public utilities to big enterprises.

The final rally in Parliament Square was addressed by trade unionists, political leaders, activists, victims of the cuts and celebrities. National Union of Teachers general secretary Christine Blower said: “This is what resistance looks like – and we’re going to see a lot more of it.”

Steve Turner, assistant general secretary of Unite, the UK’s largest trade union, and chair of the People’s Assembly, said: “We are the seventh richest economy on the planet, and while CEOs’ pay now averages £4.3 million a year we have five million workers in this country earning less than the living wage.”

Mark Serwotka, general secretary of the PCS civil servants’ union, said: “Why don’t all the unions strike together and stop austerity in its tracks? If we all stopped work, we could stop austerity.”

With the Labour Party currently engaged in electing a new leader following its dismal showing in the election and Ed Miliband’s subsequent resignation, many speakers called on people to register as supporters of the Labour Party in order to be able to vote for left-wing candidate Jeremy Corbyn, a familiar figure at demonstrations and protests. Corbyn, one of four contenders in the Labour leadership race, increased his share of the vote as MP for the Islington North constituency in London by 5.8 percent in May’s general election.

Saturday’s demo is just the beginning of a series of organised actions against austerity. The People’s Assembly has called for a national day of protests on July 8, the day that Chancellor George Osborne will announce his emergency budget and a new round of cuts, and for a demonstration outside the Conservative Party’s Annual Conference in Manchester in early October.

Saturday’s event was the largest demonstration for years and exceeded the organisers’ estimated turnout of 70,000 by a long way. It is an expression of anger over austerity among wider sections of society and will not be the last.

It has to be the starting point for a militant campaign in workplaces, trade unions and communities to build a mass movement against austerity and spread the resistance. Saturday’s protest did make an impact. Tory chancellor, George Osborne, felt compelled to announce the day after the demonstration that the £12bn of welfare cuts would go ahead in spite of the protests. It will take much more direct action, on a far greater scale, to defeat him.