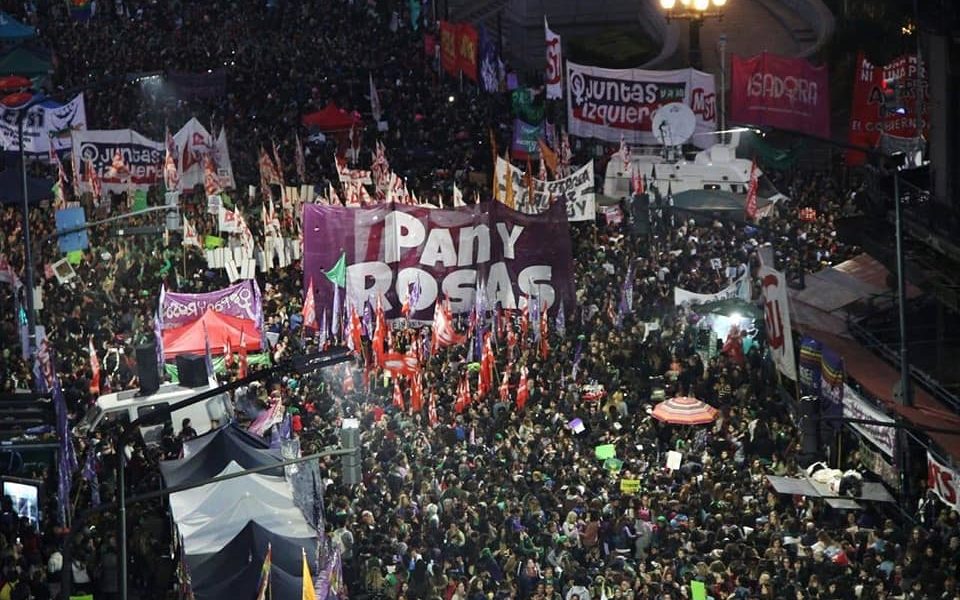 The bill that was presented in Congress on Tuesday, May 28, seeks to legalize abortion, which has been prohibited in Argentina for more than a century. The women’s movement has been fighting for the right to abortion for decades, but that demand has been systematically denied by all governments.

The green tide, as the mass movement for abortion rights is known due to the green kerchiefs that activists wear, has been growing since 2015. It started with the cry Ni Una Menos (Not one woman less) in protest against femicide. In 2018, there were huge mobilizations accompanying the debate in Congress. Hundreds of thousands of people took to the streets to demand that the parliament approve this urgent and elementary measure for legal terminations of pregnancy. Last year, however, the bill was blocked in the senate.

During the administrations of Néstor and Cristina Kirchner (who governed from 2003 to 2015), the bill to legalize abortion was presented six different times. However, in the twelve years that they ran the country, the proposal was never debated in congress. While some Kirchnerists are very prominent activists for legal abortion, Cristina Kirchner’s personal opposition was decisive.

As a result, abortions have remained illegal and clandestine. This situation takes the lives of hundreds of women per year, given the precarious conditions in which abortions occur.

This new congressional debate is taking place a few months before the upcoming presidential elections. Some Peronists and Kirchnerists, such as Alberto Fernández, the presidential candidate endorsed by Cristina Kirchner, claim that it is necessary to focus on “unity against [the right-wing president] Macri,” and therefore “there is no need to move so quickly” regarding abortion.

With a part of the center-left and the right opposing the legalization of abortion, there are very few political forces in the country that have been consistent in their support for the right to abortion over the years. The Workers’ Left Front (FIT), however, has advanced this demand for years, making it a permanent part of its platform since the organization’s formation in 2011. FIT candidates and deputies such as Myriam Bregman, Nicolás del Caño, Andrea D’Atri, and Romina del Plá are among the most prominent leaders of this fight.

As the Spanish newspaper El País affirms, the only presidential candidate in Argentina who is openly supporting the legalization of abortion is Nicolas Del Caño from the Workers’ Left Front.

Tuesday was the eighth time this bill has been presented since 2007. Members of parliament chose May 28 specifically since it is the International Day of Action for Women’s Health and, and also the 14th anniversary of the founding of the National Campaign for the Right to Abortion in Argentina. Leaders of the women’s movement and experts spoke in favor of the bill at a press conference while a huge mobilization took place outside the congress.

Members of Parliament Romina del Plá and Nicolás del Caño spoke on behalf of the FIT. They highlighted the need for organization and struggle in the streets, relying on the strength of the mass women’s movement.