After days of historic strikes, the metalworkers’ union in Germany ended its work stoppage, winning partial gains but at the expense of increased flexibility and a negotiated labor peace until 2020. 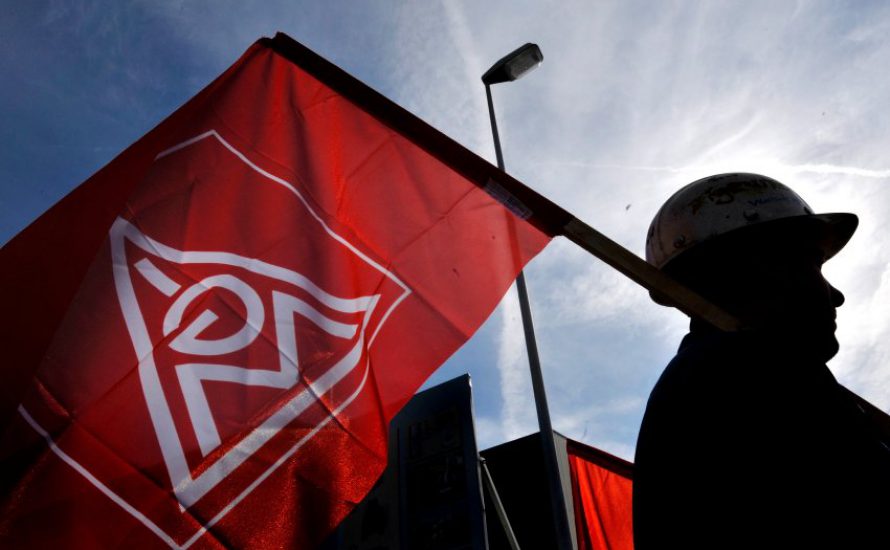 Last Tuesday night, employers in the German metal sector and the IG Metall union announced on a new labor contract. As part of the agreement, workers will be able to reduce their workweek to 28 hours for a limited period of time. However, this gain came at the cost of several other givebacks. Let’s examine this agreement more closely.

It has been quite a while since IG Metall mobilized this many workers: almost 1.5 million workers throughout the state of Baden-Wurttemberg participated in the strikes over the past weeks. The workers’ tremendous will to fight not only surprised the bosses but attracted the attention of the whole world. This is because, in the context of the current economic situation, the metalworkers’ union not only put forward demands for increased wages but also called for the shortening of the workday.

On Monday night, the negotiations ended with an agreement. Although the deal applies only to Baden-Wurttemberg currently, it will likely be adopted in other states soon. But is the agreement really as groundbreaking as the workers hoped?

The new collective bargaining agreement will be valid until the end of March 2020 — a period of 27 months. Thus, there will be a labor peace in this key sector of the German economy for at least the first two years of the new “Grand Coalition” to be launched between the Social Democratic Party and the Christian Democratic Union. This is a clear signal the the leadership of IG Metall intends to play a stabilizing role in the political crisis that has taken place over the past few months, as Merkel struggled to form a government.

Included in the agreement is a 4.3 percent wage increase, beginning April 2018, along with a fixed increase of 400 euros per year, plus a one-time payment of 100 euros to cover expenses between January and March of this year. In addition, a supplementary annual payment was agreed upon for all employees worth 27.5% of a worker’s monthly salary, beginning in 2019. Apprentices are also covered under the agreement, but they will have to settle for an increase of only 200 euros annually and a one-time payment of just 70 euros.

It is important to note, however, that the agreement gives employers permission to reduce the fixed wage increase, postpone it, or even cancel it if the company is suffering economic difficulties.

With the demand for a reduction of the workweek to 28 hours, the metalworkers’ union took the offensive. The employers, meanwhile, had made it clear that they would not sign an agreement with this demand. On the contrary, due to the favorable situation in the metal and electrical industries, employers are interested in increasing working hours. It was in this context that the deal was struck.

The newly unveiled agreement allows for individual workers to reduce their workweeks to 28 hours for a period of up to two years, but the deal does not offer a salary increase nearly sufficient to compensate for this reduction in hours. Rather, the above-mentioned supplementary payment was offered, which is paid out to workers regardless of whether or not they choose to reduce their hours. Certain workers in difficult situations, such as those on shift work, or with relatives or children to care for, can exchange this supplementary payment for more days of rest. But here, too, the devil is in the details: to qualify, workers must have as many as 15 years on the job.

But it gets worse: In order to “compensate” the employers for this reduction of the workweek, the union agreed to new “flexibility measures.” Employers can deny a worker’s request to reduce her hours if over 10 percent of workers are already receiving a reduced workweek. What’s more, the employers now have the ability to employ more workers in 40-hour contracts to make up for the reduced hours of other workers. With this, the bosses have managed to substantially extend the normal workweek of 35 hours. Until now, employers were allowed to employ only 18 percent of workers at more than 35 hours weekly.

A lost opportunity for metal workers

Overall, this agreement is disappointing. Instead of getting a major reduction in working hours, the union agreed to make the workweek more flexible. One could almost say that the agreement amounts to the union’s approval of part-time work for some workers, while the 35-hour workweek, won through a fierce struggle, is effectively canceled by perfectly legal means through an extension of the workweek for other workers.

This happened in spite of objective conditions for this fight that were much better than in any other sector in Germany. The support of the workers for the demands was overwhelming, as evident in their strong participation in the recent strikes. Merely with the warning strikes of last week, IG Metall was able to put major economic pressure on German industry: the strikes caused economic damage of between 770 and 980 million euros.

The workers were ready to prove their strength against the most powerful bosses in Germany. They could have significantly altered the balance of power between classes in the imperialist center of Europe. Given high demands for German products and record profits in 2017, an extension of the strikes would have exerted even more pressure to impose a true reduction of the workweek.

In order for that to happen, however, a greater escalation of the conflict would have been necessary, with a general strike throughout the sector. This is an outcome that both the leaders of the union and the employers sought to avoid at all costs. The head of the IG Metall, Jörg Hofmann (a member of the Social Democratic Party) expressed the interests of the union leadership in an interview with the Handelsblatt newspaper a week ago. “It seems to me to be desirable to reach an agreement without a general strike, not only in light of the potential economic damage it would inflict, but also in light of the future relationship between the employers and the union.”

In this sense, the agreement offers a way for the union leadership to save face. Their primary objective was not to win concessions but rather to maintain a relationship of cooperation with the employers and ensure the competitiveness of German industry.

What the workers think of this agreement will only be known in the workplace or in their various social media groups. But their opinion will not have much effect since the union is not required to consult its members before accepting or rejecting an agreement. Of course, a vote on the deal is something that the union leadership fears, since it could show that an big part of its base is still willing to confront the bosses.

The result of the largest strikes by German workers in recent years is a partial success; it will mean a wage increase and the right to a temporary individual reduction of working hours, which, however, will not be compensated for by proportionate wage increases. Moreover, the agreement makes it possible for employers to make the workweek more flexible and increase the percentage of workers under a 40-hour contract. Above all, it de-mobilizes workers in the metal sector for more than two years. The IGM leadership thus leaves the playing field of the Grand Coalition wide open.

Despite this, over a million workers in a key sector of German industry demonstrated their power. With only a 24-hour warning strike, they were able to win concessions from the bosses. Imagine what an all-out strike could achieve. This experience of their immense power cannot be taken away from these workers.