On Sunday, Mexicans will head to the polls for Presidential, as well as Congressional and local elections. Why is Mexico’s center-left candidate poised to win the Presidency? 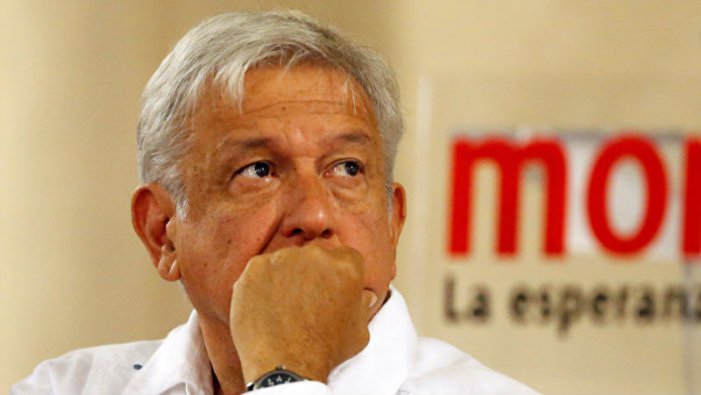 Just this year, more than 130 politicians have been killed in Mexico, making this year’s election the country’s most violent in a century. Many journalists have also been slain—65 in 2017 and 47 so far in 2018. This is characteristic of Mexican “democracy.” The killing of politicians is just an example of its degraded character.

From 1929 to 2000, only one political party governed the country—the Institutional Revolutionary Party (PRI from its Spanish acronym). The electoral regime as a whole is chronically fraudulent and resorts to murky schemes to maintain the Mexican bourgeoisie’s]] profits. There have been extreme cases of presidential election rigging, as well as the killing of presidential candidates.

Given this context, when Mexicans head to the polls on Sunday, it is possible that some strange or mysterious occurrence could change the electoral result. But at this point, it seems that the clear winner will be the center-left candidate, Andrés Manuel López Obrador (widely known as AMLO)—who is running against three other candidates.

Behind the possible first triumph of a center-left antiestablishment candidate, there is a deep crisis of the Mexican regime, and in particular of the PRI government of President Enrique Peña Nieto. The government has not yet recovered from the massive political crisis caused in 2014 by the disappearance of 43 students from Ayotzinapa, in the state of Guerrero, which brought about months of massive protests calling for Peña Nieto to be ousted. The crisis of the PRI was then further demonstrated in the previous midterm elections of 2015, when independent candidates managed to win many governorships and positions in state congresses.

Peña Nieto’s approval rating plummeted after his many corruption scandals as well as his invitation to Trump to visit Mexico—even when Trump was just a candidate.

The Mexican economy is on a further decline after Trump’s win, with the specter of changes to NAFTA hanging over the country’s head. With an economy entirely dependent on trade with the United States—however unfavorable that trade already is—there is a constant threat that the trade agreement will be renegotiated with conditions even less favorable to Mexico.
It is in this context that AMLO will likely win the election. Who are the three other candidates, and what does AMLO’s likely win mean for Mexico?

In second place is Ricardo Anaya, a young candidate from the Por México al Frente (Mexico in the Front) coalition. This coalition includes the right-wing National Action Party (PAN), which is linked to Mexico’s largest capitalists and the Catholic Church. The PAN ruled Mexico from 2000 to 2012, leading the U.S.-backed “war on drugs,” which, according to official numbers, has left more than 200,000 dead. Strangely, this coalition also includes the Party of the Democratic Revolution (PRD), a formerly center-left party, which split from the PRI in 1989. Left parties all over Mexico joined the PRD after its founding in the late 1980s, dissolving themselves into a party that is now in coalition with the right wing. After serving for years as the regime’s left wing, using left rhetoric to appear more as an opposition to the rest of the parties (a process we explained in depth here), the PRD was an accomplice in the disappearance of the 43 Ayotzinapa students, since it governed both the state of Guerrero and the town of Iguala, where the students disappeared.

Anaya has the same programmatic positions as those of Felipe Calderón (Peña Nieto’s predecessor), including keeping the army on the streets, which has caused hundreds of thousands of deaths. The PAN alleges that these deaths have been the result of drug traffickers and violent cartels. But, according to a report by the Washington Office on Latin America (WOLA), the army carries most of the responsibility for the massacre of the civilian population and migrants trying to reach the U.S. border.

For many, this coalition is a political abomination in which the “left” PRD allies with the right-wing PAN; 12 years ago such an alliance was unthinkable. But now the PRD’s complete bankruptcy is clear. The thirst for power has brought the two parties together to win over the “anti-PRI vote” and capitalize on the anger toward Peña Nieto.

Anaya is a young leader of the PAN who wants to keep NAFTA and seeks harsher security measures and better relations with the United States. He was recently investigated for money laundering by the Attorney General’s Office and the Spanish government. He has also made unviable proposals such as increasing the minimum wage to MXN$100 (equivalent to US$5.04), which does not take into account inflation or affect the profits of big business. He also opposes abortion and the legalization of drugs.

The PRI’s candidate, José Antonio Meade, is unlikely to win. A longtime politician, he has held several government positions as an independent. The PRI’s 70 uninterrupted years as a hegemonic party weighs heavily on the party. What weighs even more heavily is Peña Nieto’s complete submission to the Trump administration. Meade’s candidacy is an attempt by the PRI to distance itself from Peña Nieto, since Meade was not a formal member of the PRI. But this move did not work, since polls show that his coalition, formed by the New Alliance (PANAL) and Green (PVEM) parties, remains stuck in third place.

In last place is Jaime Rodríguez Calderón—“El Bronco”—running as an independent. He is a former member of the PRI who was elected governor of the northern state of Nuevo León, capitalizing on anti-establishment sentiment and calling himself an independent. Seeking to repeat his feat, El Bronco managed to get hundreds of thousands of signatures in support of his candidacy. Among his proposals are stricter security measures and good relations with the United States. Rabidly anticrime and anti-corruption, he proposed in a presidential debate that politicians caught stealing should have their hands cut off—making him the object of memes and ridicule.

The likely winner: The eclectic left

AMLO is up by 20 points. If he wins, it will be the first time a left-wing antiestablishment candidate has won the presidency in Mexico. It is also the first time that his party, the National Regeneration Movement (referred to as MORENA), has run in a presidential election.

AMLO leans on a working-class base that is sick of the political establishment—the austerity and the violence that characterizes Mexican reality. AMLO puts forward a platform of fighting corruption and mitigating the most pro-imperialist policies of the previous presidents. For example, PeMex, the Mexican oil company, was mostly privatized in 2012, making Mexican oil open to be purchased by transnational corporations. While AMLO does not propose to nationalize Mexican oil, he does want more limits on transnational corporations. AMLO’s program does not question capitalist interests, since it is a nationalist program whose positions zigzag, having shifted more to the right as the election nears. His program is nowhere near as left as that of the “Pink Tide” governments like that of Hugo Chávez in Venezuela. Yet the massive repudiation of the political establishment leads people to vote for AMLO in droves.

AMLO became known as a leftist after the 2006 electoral fraud, when he held a three-month sit-in demanding that the votes be recounted. Many associated him with Chávez, calling him an “extremist leftist,” thanks to his proposals for increasing pensions and the education budget by harnessing the then-high cost of oil prices.

But AMLO’s “leftist” image is largely an exaggeration. For example, during his tenure as mayor of the Federal District (2000 to 2005), AMLO was advised by former New York mayor of Rudolph Giuliani, who helped establish the controversial Article 362 of Mexico City’s Criminal Code. This article, targeting “terrorist acts,” was used to massively imprison the youth of the #YoSoy132 movement on December 1, 2012, when they protested Peña Nieto’s inauguration.

With a leftist image threatening his possibilities of winning the support of capitalists, AMLO has been emphatic that he will provide amnesty to corrupt politicians, to “reconcile the classes.” He has attempted to distance himself from his populist image, even accepting into MORENA former members of the PRI, PAN and PRD—the same parties that on the campaign trail he disparagingly calls “the mafia in power.”

Recently, AMLO supported a controversial project to build a new international airport in Mexico City, dispossessing indigenous people of their lands. AMLO is also wish-washy on basic rights, like the right to an abortion and same-sex marriage, saying that they should be up for a referendum—a clear appeal to the right wing. This explains why an evangelical and reactionary party like the Social Encounter Party (PES) is in the MORENA coalition. In 2016 the PES financed homo- and transphobic marches led by a formation known as the National Front for the Family. Now the PES has radio commercials in support of its presidential campaign with MORENA, calling “to maintain family values.”
AMLO thus seeks to appease both the capitalists who could see him as a threat and those who have been supporters in the mass movement. His intention is to “govern for the rich and poor”—that is, he does not want to confront capitalist interests.

It’s not the Pink Tide

AMLO will face many more limits to putting forward a government of class conciliation, as the Pink Tide governments were able to do. The Pink Tide governments, which emerged in Latin America in the early 2000s, could provide massive profits for the wealthy, and some concessions to the working class thanks to a moment of economic prosperity. They could distance themselves to some degree from U.S. imperialism by shifting to trade with China, giving the appearance of “confronting” U.S. imperialism—if only in rhetoric. The failure of this strategy is clear, given the right-wing shift in Latin America, to which the Pink Tide governments have put up almost no opposition. But in Mexico, AMLO is unlikely to be able to deliver even the class conciliation of the Pink Tide. The moment of economic recession does not allow it, and importantly, the closeness and complete subordination of the Mexican economy to the United States will not allow Mexico to distance itself from it.

Meanwhile, the despotic character of the Mexican government, its closeness to the United States and its historical subordination to U.S. interests makes a candidate like AMLO extremely disruptive to the status quo. This opens the possibility that the aspirations of the masses, which AMLO will not be able to uphold, will take on an independent character, pushing to go further than AMLO’s program.