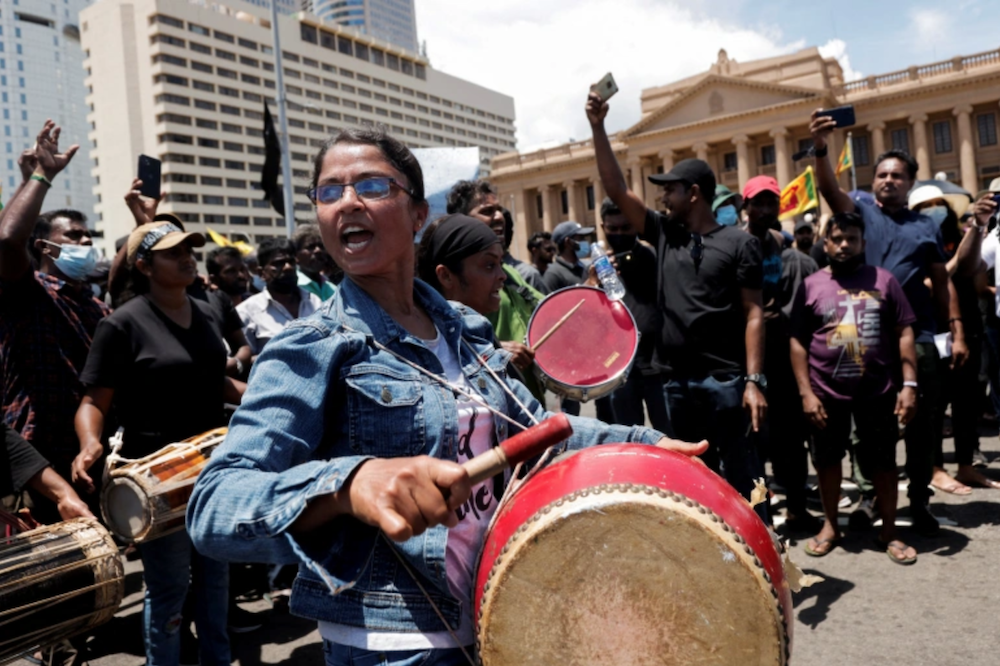 On Thursday, April 28, millions of workers in Sri Lanka held a general strike to demand that President Gotabaya Rajapaksa and his government resign as the country’s historic economic crisis worsens.

The strike — the first in over four decades — was endorsed by almost 1,000 trade unions, and crippled the whole country as both public and private sector workers participated. Banks were shut, there was no public transportation, and schools and businesses were closed through the day. In Colombo, the capital city, thousands of workers joined protesters who have been camping outside Rajapaksa’s residence.

These protests are happening as Sri Lanka’s economic crisis, which had been brewing for years, continues to deepen rapidly, especially as the war in Ukraine rages on. The crisis, the worst in decades, has caused massive shortages in food, fuel, and energy, with the country experiencing 10- to 12-hour long power cuts every day.

Protests have been escalating, and calls for Rajapaksa’s resignation continue to grow. Earlier this month, 40 cabinet members resigned en masse, leaving Rajapaksa with a minority government. Last week, the police also opened fire on protesters, killing one person and injuring two dozen others.

Since the time of our last report, Sri Lanka has defaulted on $52 billion in foreign loans. The Rajapaksa government has also entered into extensive talks with the International Monetary Fund (IMF), looking for a bailout. But such a debt restructuring comes at a great cost for Sri Lanka’s working class as they’ll be forced to implement crippling austerity measures, such as removing price controls, depreciating the currency, liberalizing trade, and implementing privatizations, to name a few. This is par for the course for institutions like the IMF that use economic crises to deepen imperialist exploitation.

In the face of this political turmoil, Rajapaksa has invited opposition parties to form a coalition government — an invitation that these parties have thwarted in favor of demanding his resignation. Instead, the main opposition leader, Sajith Premadasa, is currently leading a march to Colombo to coincide with May Day celebrations.

But let’s be clear: these opposition parties, vying for the top office and still tied to the capitalists, pose no real solutions to the current crisis.

The millions of workers who participated in the general strike on Thursday put forward a powerful alternative. But a one-day general strike is not enough. The trade union leaders have declared that if the Rajapaksa government does not resign, they will undertake a longer strike starting May 6.

To carve a real solution out of this crisis, it is imperative that workers extend this strike indefinitely, not only to demand the resignation of the current political caste, but also against all the austerity measures imposed with the agreement of both the imperialist and national bourgeoisies. The working class should not pay a single cent for this crisis.

Sri Lanka’s foreign debt must be canceled, and strategic industries must be nationalized in order to cut off the country’s dependence on imperialist powers. For workers around the world, it is essential to stand in solidarity with workers in Sri Lanka, and above all, to demand, with our full strength, an end to the war in Ukraine which is only exacerbating the crisis and suffering for the masses around the world.