Myanmar Explodes in General Strike Against the Coup

Hundreds of thousands of workers and protesters took to the streets in Myanmar amidst threats of repression by the military government. Over the weekend, two people were killed by the police — a total of four have been killed since the movement against the coup began. 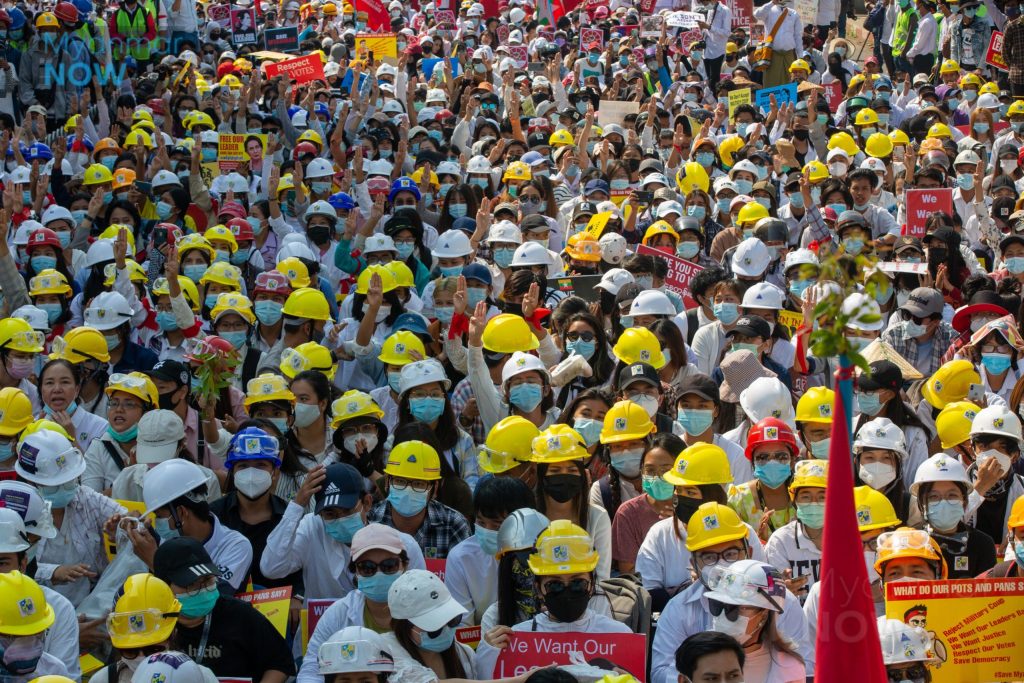 Despite the military’s threats of violence against “demonstrators who risk death by continuing to march” and police repression against protesters over the weekend, Myanmar erupted on Monday in the largest day of strikes and protests since the coup began on February 1.

The internet blockade, military roadblocks, and the threat of more deaths at the hands of the military has not deterred the mass movement of workers, students, and activists who promise to bring down the military dictatorship. On Monday, unions across Myanmar called for a general strike to paralyze the country.

Hundreds of thousands of people in Mandalay joined the nationwide general strike against the military coup.#22222generalstrike #WhatsHappeningInMyanmar pic.twitter.com/xEG49IDHol

Hundreds of thousands of people took to the streets in the main cities of the country for the third week in a row, after a tragic weekend in which two people were shot dead by the police. This brings the total number of people killed in the resistance against the coup to four. Masses of protesters flooded the streets of Myanmar’s largest city, Yangon, as well as the country’s capital, Naipyidó, and the city of Mandalay.

Protesters are fighting against the coup and for the release of more than 600 political prisoners, including the country’s elected leader Aung San Suu Kyi.

Although the protests were generally peaceful on Monday, there were still intense clashes with the police and harsh repression by military forces, especially in Naipyidó. Videos posted by activists on social media showed police chasing and beating protesters, and arresting people en masse.

In anticipation of Monday’s massive actions, coordinated by unions and activist groups, the military junta once again cut off the country’s internet and restricted the use of data during the morning. They also set up roadblocks in Yangon and Naipyidó to prevent protesters from gathering and marching through crowded streets.

Monday’s call to action has been named “The 22222 Revolution” because it was called on February 22; this name is a reference to the protests against the military junta on August 8, 1988, better known as the 8888 Revolution, which was violently suppressed by security forces.

Millions of Myanmar citizens regardless of differences in race, religion, ethnicity, gender, sex, skin color and profession, protest together against unlawful coup and dictator.

We all deserve democracy. HELP US! pic.twitter.com/h2prWotcem

Today’s massive response, which has brought almost the entire country to a standstill, came in the wake of a police crackdown on Saturday that cost the lives of two protesters in Mandalay, Myanmar’s second-largest city.

These deaths followed the widely publicized police killing of Mya Thwe Thwe Khine, a 20-year-old woman who was shot in the head by police during a protest and who died after ten days in the hospital.

In response to these deaths, the military junta put out a clear threat to protesters, accusing them of “escalating their demonstrations to riots and lawless mobs.” The military warned that more lives would be lost if protesters continued to defy the coup. Judging by the massive amounts of people in the streets this Monday, however, these threats have had no effect on the movement.

Even as Aung San Suu Kyi and her supporters in the National League for Democracy (NLD) refuse to call for the overthrow of the military government, workers, peasants, students, and activists in Myanmar refuse to back down. The movement is being led by some of the most precarious sectors of the working class, including workers in Myanmar’s textile factories, who know that the military coup will only enable the bosses to increase exploitation. The protests in Myanmar show the power that only the working class has to carry the fight against police repression and the coup forward, paralyzing the country’s operations and leading the massive demonstrations in the streets.