Nicaraguan president Daniel Ortega is seeking a fourth presidential term. The elections are taking place in the middle of a major national crisis, the division of the bourgeois opposition, and threats by U.S. imperialism. 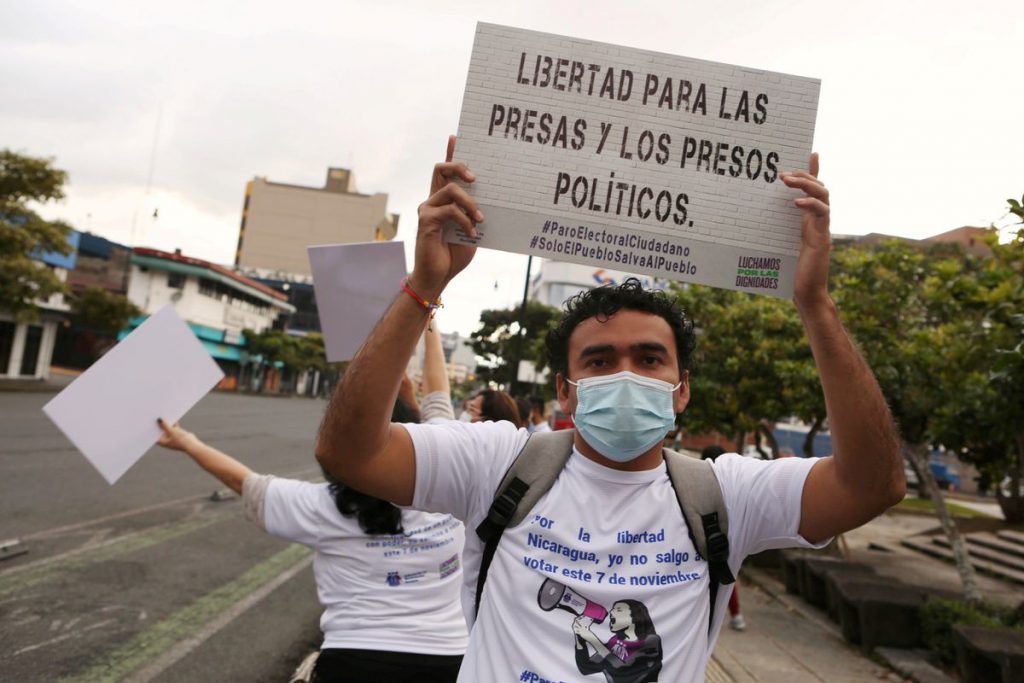 Today, November 7, is election day in Nicaragua. The presidential and legislative elections have been organized to maintain the authoritarian regime in power, as the repressive government of Daniel Ortega has managed to exclude the main opposition candidates from running. Meanwhile, the U.S. and EU have stepped up their threats of interference. The Nicaraguan workers, peasants, and masses are in the crossfire from both foreign imperialism and the repressive Ortega government.

Nicaragua’s crisis dates back to 2017 when the economy began to weaken after a series of agreements between the government and economic elites, including many representatives of the parties that now oppose Ortega. In this period, conservative and repressive policies were the general rule.

The breaking point was a worker and peasant revolt in 2019 against the government’s attacks and poverty after a period of economic growth in which these groups did not see any improvement in their material conditions. Ortega responded with heavy repression, leaving hundreds of protesters dead, and thousands more injured or jailed. Imperialist interference also increased, bourgeois opposition parties were banned, all of which paved the way for Ortega and Murillo’s reelection.

Ninety deputies for Nicaragua’s National Assembly of Nicaragua and 20 members of the Central American Parliament will also be elected today. Aside from Ortega and Murillo’s party, the Sandinista Front for National Liberation (FSLN), only only six other parties have been permitted: the Independent Liberal Party (PLI), Nicaragua’s Liberal Alliance (ALN), Nicaragua’s Christian Path (CCN), Alliance for the Republic (Apre), and Yatame (only in the Caribbean coast).

Three bourgeois opposition political parties, the Conservative Party, the Democratic Restoration Party (PRD), and the Citizens Alliance for Liberty (CxL) were forbidden to participate, allegedly for violating electoral laws. In addition, at least seven opposition presidential hopefuls were imprisoned on charges of alleged “treason.” Two others fled into exile. That is why it’s commonly said that “in the next elections, Ortega faces Ortega.” Only the parties aligned with Ortega’s government will be allowed to run. These parties are known as “stilt parties,” an expression from the 1950s when the father of the overthrown president Anastasio Somoza built up a favorable opposition to maintain his dictatorship.

The most notable figure who could not run was Cristiana Chamorro of the CxL party. The opposition sought to repeat the experience of her mother, Violeta Barrios de Chamorro, who defeated Ortega in the 1990 elections by uniting all the bourgeois opposition parties under the guidance of the United States. Chamorro governed until 1997. Now, the younger Chamorro has been placed under house arrest and has been disqualified from participating in the elections due alleged money laundering. Two other presidential hopefuls, Felix Maradiaga and Juan Sebastian Chamorro, were arrested in June for allegedly inciting foreign interference.

The opposition is also calling on the United States to intervene more actively against the Ortega-Murillo government. It wants Washington to target it with heavy sanctions, and suspend Nicaraguan participation in the Central American Free Trade Agreement with the United States (CAFTA).

According to a recent poll of mid-October, Ortega and Murillo are in a weakened position with only 19 percent support. But Ortega is not alone: he has the full backing of the National Police and the Armed Forces.

Nicaragua is emerging from a great workers’ and mass rebellion that took place on April 19, 2018, and lasted for more than three months. It was violently crushed by the Ortega government with the use of police, military and paramilitary repression, leaving around 400 dead. It was in this way that Ortega and his wife Rosario Murillo — who plays a central role in the government — regained control of the country despite protests on a scale not seen since the revolution in 1979.

Ortega’s policies have not only been characterized by repression, but also by the application of anti-worker economic policies since his second term began in 2007. His return to power that year was made possible through agreements with big corporations, the Catholic Church, and the IMF. He was doing this on the back of the erosion of the previous governments of the right-wing parties, which had also applied anti-worker policies and were marred by corruption.

Over the last decade, big companies have supported Ortega’s political and economic reforms. This alliance was described by some analysts as a sort of de facto co-government. These were the pillars of big Nicaraguan capital that have been built around a few very powerful families with strong influence on the banks and agribusiness.

But the crisis arrived in 2017, firstly because Venezuelan cooperation deteriorated as a result of the economic catastrophe faced by the Maduro government. Before 2017, trade and political agreements with Venezuela benefited large economic groups more than the Nicaraguan people, who did not see improvement in their living conditions. But in 2017, the continuous growth that had characterized Nicaragua began to cease.

It was at this moment that these economic elites no longer considered Ortega useful, even spoke of an “exhaustion of the cycle” and began to withdraw their support. Although after today’s elections and in the coming months, there may be a negotiation between the big companies and economic unions with the government, it will be difficult to revive the cycle that began in 2007.

To this we can add to the years of uninterrupted Ortega government, rampant corruption, the political exhaustion of a regime that could no longer sustain itself on the aforementioned economic elites, and the impoverishment of the masses, leading to the implementation of IMF austerity measures.

From this perspective, the rebellion of 2018 was a logical outcome. After crushing the rebellion, the main opposition political parties negotiated its end through dialogue committees, which ended up taking the mass movement out of the streets.

This was the moment when the most important parties entered a period of strong divisions, which ended up strengthening Ortega again.

The U.S. Role in the Nicaraguan Crisis

The United States and the European powers do not intervene on the behalf of the Nicaraguan working, popular, and peasant majorities and their democratic rights. These imperialist powers intervene to support the opposition that is most aligned with their policies.

Under the demagogic discourse of democracy, at the end of 2018, the U.S. Congress passed a bill known as the NICA Act, which orders U.S. officials from multilateral lending institutions to use their influence to stop funding to Nicaraguan state agencies. The initiative was signed into law by then-president Donald Trump.

In the last year, under the Biden administration, the Treasury Department imposed sanctions on dozens of Nicaraguan officials and their family members, as well as those close to Ortega, including his daughter, Camila Antonia Ortega Murillo. In anticipation of election day, the U.S. Congress also approved the so-called “Renacer” (Strengthening Compliance with Conditions for Electoral Reform) law, which will allow for increased sanctions against the Nicaraguan government.

In Nicaragua, we must fight for the defense of democratic freedoms and against all of the Ortega’s regime’s repressive policies. We must fight for the freedom of all political prisoners, the vast majority of whom are detainees from the 2018 rebellion, including workers, popular, peasants, and youth sectors. It is necessary to fight for the fullest right to freedom of expression and social, political, and union association.

In these elections, there is no choice for the exploited and oppressed majorities. Only an independent path of the workers, the great popular sectors, and the poor peasants with their mobilization can lead the way. The working people, peasants, and youth cannot base their aspirations on the bourgeois opposition parties, which represent the interests of the big economic groups and the U.S. imperialism.

A struggle to put an end to Ortega can only be carried out by the working class, the popular majorities, the peasants, and the youth. These groups must resume the days of rebellion and the demands put forward in 2018, based on self-organization, and setting up independent organizations to rely only on their own forces.

First published in Spanish on November 6 in La Izquierda Diario.