On August 26, in a sweeping act of solidarity with the anti-racist movement, athletes across the country walked off courts and fields, halting over a dozen professional games in basketball, baseball, and soccer. These solidarity strikes are one more expression of the widespread and growing rage against institutional racism and police terror that has driven the movement in the streets for the past three months. 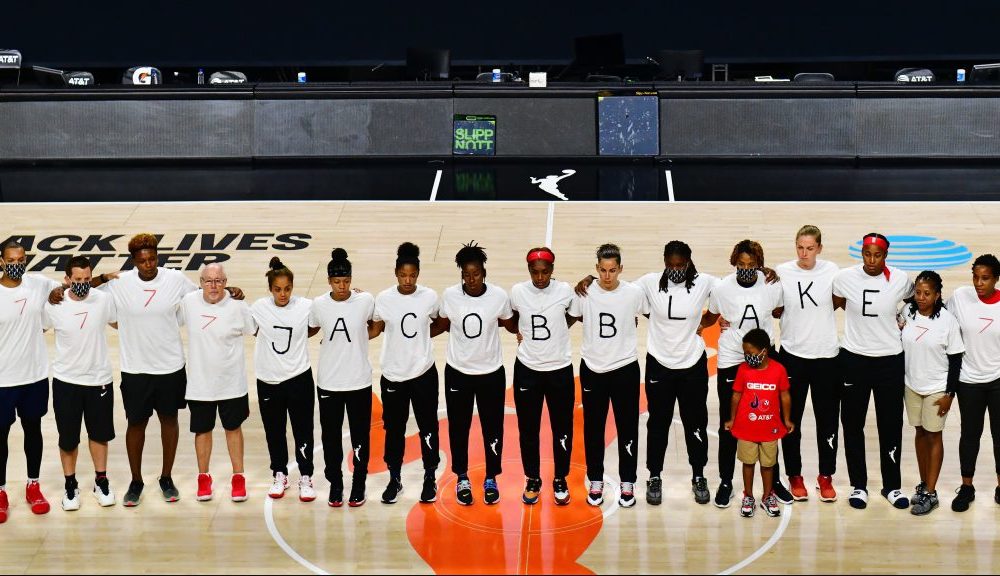 As protests continue to erupt in the streets of Kenosha, Wisconsin and across the world in outrage against the horrific shooting of Jacob Blake by police, professional athletes around the United States have refused to play in an act of solidarity and outrage at the continued racist violence perpetrated by the state. This stunning show of solidarity with the anti-racist movement that has raged in the streets for three months demands that the cops responsible for shooting Blake in the back be arrested and demands justice for the two protesters who were murdered by right-wing vigilantes as they fought against the police. In all, over a dozen professional sports games were postponed as a result of the walkouts.

The solidarity strikes began when members of the Milwaukee Bucks refused to participate in game 5 of the NBA playoffs against the Orlando Magic, igniting a series of similar actions across teams and sports. Players in the WNBA, NBA, the MLB, and the MLS have all staged walkouts from the field or otherwise refused to play in solidarity with the Black Lives Matter movement and Jacob Blake. Their actions began four years to the day after Colin Kaepernick of the San Francisco 49ers first took a knee in protest of structural racism, inequality, and the state-sanctioned murder of Black people at the hands of police.

For over a month, athletes in the NBA have been living and playing in the NBA’s “bubble” at Disney World, a protected complex to house players and prevent the spread of Covid-19 during the basketball season. This was part of an effort, under pressure from wealthy team owners but initially supported by many players, to restart the sports season in the midst of the pandemic, which has prevented in-person games. However, since the release of the video of Jacob Blake’s shooting, tensions have been mounting inside the bubble among players outraged at the continued violence inflicted on Black people by the police and the racial injustices entrenched in U.S. society. There have been many discussions about whether the season should continue and what actions players could take to protest this latest act of police brutality. On Wednesday, these tensions reached a boiling point when the Bucks refused to take the court. In a statement released by the team, players explained their reasons for boycotting the game:

Over the last few days in our home state of Wisconsin, we’ve seen the horrendous video of Jacob Blake being shot in the back seven times by a police officer in Kenosha, and the additional shooting of protestors…We are calling for justice for Jacob Blake and demand the officers be held accountable.

Four minutes before the start of the game, players on the Orlando Magic followed suit, leaving the court and boycotting the game in solidarity with their fellow players on the Bucks. According to reports from ESPN, soon after they announced their refusal to play, the Bucks were on the phone from their locker room with Wisconsin Attorney General Josh Kaul and Lieutenant Governor Mandela Barnes to present their demands. The players may be subject to retaliation from both management and the NBA for refusing to play, because their actions violate a clause against striking in their contract; though the team is calling the action a “boycott,” it risks a $5 million fine for not showing up to the game.

After this demonstration by the Bucks and the Magic and amid rumors of other teams following the Bucks’ lead, the NBA and the National Basketball Players Association (NBPA) were forced to postpone three other games to head off further protest actions. Nevertheless, other players and sports figures have spoken out to show their solidarity with the athletes, including LeBron James who tweeted:

FUCK THIS MAN!!!! WE DEMAND CHANGE. SICK OF IT

John Carlos, the American sprinter who famously raised his fist in a Black Power salute during the National Anthem at the Olympics in 1968, also expressed his support. Speaking to TIME, he acknowledged the great influence that these demonstrations could have:

I respect the hell out of them for doing that…Because you have to squeeze the toothpaste tube to get people to respond. And their boycotting lets the powers that be, whether it’s the NBA or any professional organization or corporate entity, know that they need to raise their voices. They need to get serious about the situation.

But the Bucks’ actions were only the start of a night of sweeping action by sports players across the country.

Six other NBA teams refused to play in the playoffs on Wednesday. In a stunning turn, LeBron James’ team, the Los Angeles Lakers, as well as the Los Angeles Clippers even voted to boycott the remainder of the NBA season in protest of Blake’s death and to demand an end to police violence. If the vote goes through, a strike of this magnitude could put the entire basketball season in jeopardy, putting pressure on team owners and the rest of the sports industry who want to secure their profits from the season.

In the WNBA, members of the Washington Mystics took to the court in shirts that spelled out Jacob Blake’s name on the front; the backs of their shirts were marked with seven holes to represent the seven times Blake was shot in the back by two police offices, leaving him in critical condition and paralyzed from the waist down. The Mystics then walked off the court before the game. Four other teams that were slated to have games that night also refused to play in solidarity with the Bucks, the Mystics, and the movement against racism in the streets. As Atlanta Dream forward Elizabeth Williams said in a statement to ESPN, “We stand in solidarity with our brothers in the NBA and will continue this conversation with our brothers and sisters across all leagues and look to take collective action.”

Bucks owners just issued a statement in support of their players: pic.twitter.com/B3ynPFn62r

The wave of protests from sports teams extended beyond basketball, into other sports that have historically been more hesitant to intervene in such collective actions. On Wednesday night, baseball was rocked when the Milwaukee Brewers refused to play their game with the Cincinnati Reds. They were soon followed by the Los Angeles Dodgers and Giants, who were slated to play in San Francisco, as well as the Padres and Seattle Mariners in San Diego.

In soccer, five games in the MLS were also postponed as part of a collective protest on Wednesday night. Players from games between Atlanta United and Inter Miami, FC Dallas and Colorado, Portland and San Jose, Real Salt Lake and LAFC, and the LA Galaxy and Seattle all refused to play as a show of support with the anti-racist movement and the protests staged by the NBA.

Inter Miami and Atlanta United stand together in solidarity as they boycott their match tonight. pic.twitter.com/AuJDSbNvQ1

These historic solidarity strikes in support of the fight against racism and police terror show that the movement in the streets — raging once again in Kenosha — is far from over. Many of these athletes are Black and experience the same kind of racial profiling and racist policing that Blake, Breonna Taylor, George Floyd, and countless other Black people in the U.S. experienced and continue to experience daily. Moreover, the participation of sports players in these demonstrations has extended to a wide variety of sports, including those like baseball with players and fan bases who are historically more conservative and white. This is demonstrative of the great depth of support for the movement for Black lives and the potential it has to expand to greater sectors. The collective efforts of these high-profile athletes sends a clear message to the capitalists who want business to proceed as usual in the middle of a pandemic, economic crisis, and the systematic killing of Black people by the police: We demand change.

These demonstrations have inspired other athletes to challenge their management and organizations to take a stand against the racism perpetrated by the state. Naomi Osaka, the two-time major tennis champion, announced Wednesday that she would not play in Thursday’s Western & Southern Open semifinal match. The entire tournament has been forced to be put on hold. Even the NHL, which has been particularly tepid on the question of racial injustice and other social issues, is being pressed by its players to take stronger action to address racial inequalities and to join in supporting the movement against police terror. Wednesday night’s sports blackout may just be the beginning of a larger strike movement within the sports entertainment industry against the violence and exploitation of Black people in the United States.

Given the reach and visibility of sports players, these actions have the potential to inspire the entire working class, which should see this as an example (despite the huge differences in the wages and conditions of athletes compared to the vast majority of workers) of the potential of collective coordinated action against capitalist profit-making. However, much of this platform has so far been used as a means of sowing illusions in the electoral process to cure racial injustice and funneling support for the movement into votes for the Democratic Party in November. Much of the rhetoric used by the teams to explain the solidarity strikes, including the powerful statement by the Bucks, has been centered around the need for reforms to police practices and the need to get out the vote (for Democrats ) — as opposed to calling on the entire working class to rise up against police violence. Though the athletes’ actions have put the horrendous shooting of Jacob Blake by the police on a public level undeniable to broad sectors, their solution is to put faith back in the same politicians who have let Blake’s shooters go free, protected the police, and repressed the movement in the streets with the National Guard and riot cops. But sowing illusions in the Democratic Party and a bourgeois system that thrives off of racism and violence will not put a stop to police terror. Both Joe Biden and Barack Obama have voiced support for the players’ actions, but their own records on race show clearly that they are not on the side of the movement against the police, nor is the Democratic Party which they represent — a party that has time and time repressed the movement in the streets and which works to defang the movement while upholding the institutions that ensure the violent exploitation of people of color by the state.

To rip the U.S.’s racism up from its roots and put an end to racial injustice and police terror, the entire working class must rise up against the brutal actions of the police who shot Blake in the back while his children watched and against the state that allows the murder of Black people and protesters who fight back against racism. The actions by athletes across the country should serve as a catalyst for a whole host of strike actions, led by the working class and oppressed, to break with a system that wants nothing more than for us to return to the same racist status quo.