No to War in Ukraine! Out with Russian Troops! No NATO Imperialist Intervention!

Yesterday, Vladimir Putin launched a military operation in Ukraine after decades of increasing tensions between NATO and Russia for control of the zone of influence of the former Soviet Union. Neither imperialist intervention nor Russian military interference in Ukraine! For an independent working-class and socialist Ukraine! 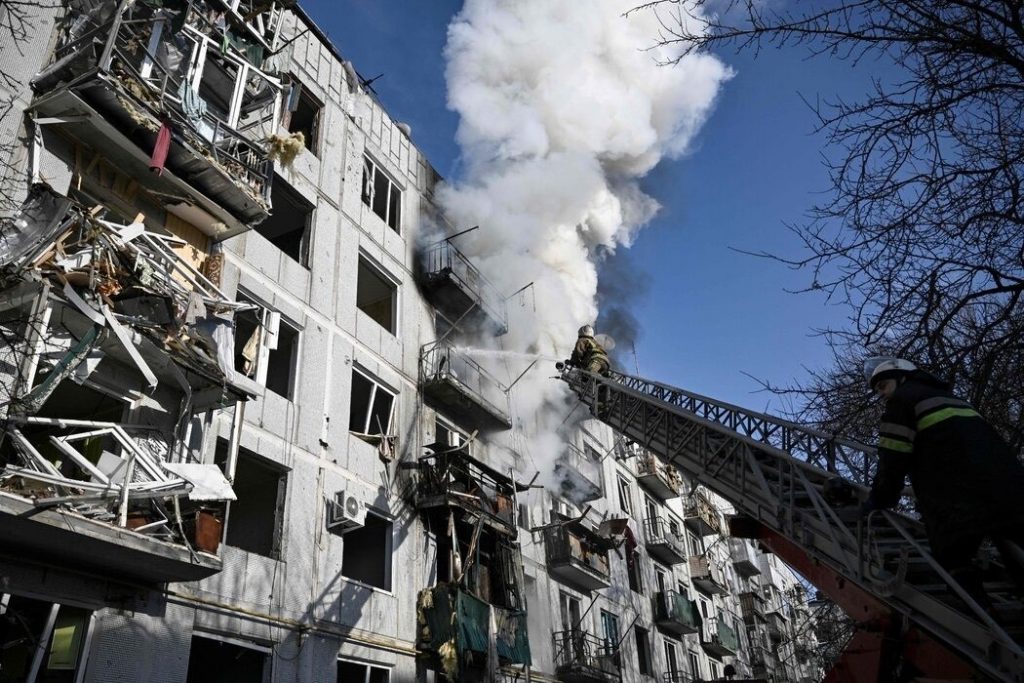 Workers around the world woke up this morning to images of Ukranians fleeing their homes and reports of explosions rocking several Ukrainian cities. In the early hours of Thursday, Russian president Vladimir Putin announced the entry of Russian troops into the Donbas region, even beyond the limits of the self-proclaimed People’s Republics of Donetsk and Lugansk, which Putin recognized on Monday.

The invasion was followed by precision bombing of military installations in the west of the country, including Kyiv and a dozen other cities. Ukrainian president Volodymyr Zelenskyy declared martial law across the entire country as Russia launched its military operation, adding to the chaos confronting the Ukrainian masses.

This morning’s announcement flows from the events of recent days and opens up a new chapter in the situation, with a more pronounced military element in terms of the confrontation between NATO and Russia in Ukraine. Thus far, the United States and its European allies have maintained a policy of “coercive diplomacy,” which consists of economic sanctions, military deployments in NATO countries close to Russia, and sending weapons to Ukraine. It’s expected that the Western powers will today impose an even broader set of sanctions in response to the most recent escalation of the conflict.

Biden’s response points to the unwillingness of the imperialist powers to wage a major war or even have a direct military confrontation. For now, these aspects of “coercive diplomacy” are preferable to open conflict with Russia for the United States and NATO. Nevertheless, the tendency toward military confrontation has undoubtedly been strengthened.

Within the context of declining U.S. global hegemony, a domestic crisis, and the internal divisions in the U.S. regime, Biden is seeking to strike a delicate balance aimed at showing strength against U.S. adversaries while preventing a military confrontation that would be unpopular among the war-weary U.S. populace with fresh memories of the disastrous withdrawal from Afghanistan.

While imperialism is a bipartisan affair, and issues of “national security” typically bring the two parties of imperialism even closer together, there is a difference today: Donald Trump, against the backdrop of the looming midterm elections, has put himself staunchly in the pro-Putin camp, going as far as praising Putin’s invasion as an act of “genius.” Other Republicans under the influence of Trumpism have also praised Putin. Yet even as most Republican voters view Putin more favorably than Biden, a large majority of U.S. lawmakers support Biden’s policies, such as  sanctions and the potential for U.S. military action down the road. That includes even so-called “progressive” lawmakers like Alexandria Ocasio-Cortez, whose progressivism seems to extend only to matters of domestic policy.

Even the “united front” of allies across the globe, particularly in Europe, that Biden has been able to maintain despite generally weakened U.S. international alliances in recent years is not without its contradictions. While the crisis in Ukraine has given NATO allies a sense of unity in some aspects, it has also exposed differing interests, particularly between the United States and Germany (and with France as well). European dependence on Russian gas for energy, particularly German dependence, gives Russia an edge. But that didn’t stop a reluctant Germany from undertaking a major sanction: stopping the certification of the Nord Stream 2 pipeline, which was recently constructed and is key to Russia’s energy sector.

The economic impact of these imperialist policies, in addition to Russian aggression, has already led to economic repercussions that primarily affect the masses in Ukraine and Russia, as well as workers around the world. Stock markets are falling, and the price of a barrel of oil hit $100 for the first time since 2014. The threat of broader sanctions, which has already triggered currency devaluation in Russia, will end up primarily starving and depriving workers of basic needs. Already, many regular Russians are not able to access their savings and ATMs as banks respond to the sanctions. Russia is also the world’s largest exporter of wheat, a critically important commodity, and the fall of the ruble’s value means inflation in Russia, which will negatively affect people around the world.

What Will Happen Next?

The situation in Ukraine is escalating faster than many expected, with some analysts characterizing the situation as the next “great war.” While the situation is still fluid and developing rapidly, Putin has put NATO in a tough position: a failure to respond with measures deemed “up to the task” will highlight NATO’s weakness, whereas any significant response beyond sanctions opens the door to a greater confrontation between nuclear powers, with unknown consequences.

As the situation unfolds, China is watching and taking notes. Amid China’s growing confrontation with the United States, it has cozied up to Russia — but China continues to tread cautiously, as the unpredictable consequences of an all-out war could be contrary to China’s interests. While the Russian attacks present a test for the tenuous Chinese-Russian alliance, Biden’s plans to isolate China are made all the more difficult in a scenario where battle lines are beginning to be drawn.

China is also paying attention to the West’s response as it contemplates whether to take Taiwan back by force.

It’s important not to forget that in many ways, what is unfolding in Ukraine right now is the product of historical tensions between NATO and Russia, who have been fighting to control the zone of influence of the former Soviet Union since capitalism was restored in the Eastern Bloc.

In the face of the advance of the United States and the European imperialist powers in the region, especially since the end of the Euromaidan protests in 2014 that were used by the imperialist powers to install a government friendly to U.S. and European Union interests, many view Putin’s regime as a bulwark against Western imperialism.

Yet the reactionary nature of Putin’s regime is on full display. It serves not only the capitalist interests of oligarchs close to it, but also counterrevolutionary objectives in a broader sense, as evidenced by the military intervention ordered by Putin to suppress the popular uprising in Kazakhstan, or interference in favor of sustaining the Assad regime in Syria. And let’s not forget that the Russian regime has been backing a bloody armed rebellion in eastern Ukraine, using the nationalist card to advance the interests of its bourgeoisie, for the past eight years. During that period, some 14,000 people — including many civilians — have died in fighting.

Clearly, Putin has nothing to do with defending the gains of the Bolshevik revolution, and the anti-communism of his recent speech only cemented this. It flies in the face of those on the Left who are backing Putin based on the patently false idea that his regime is somehow the successor of the Soviet Union.

The imperialist powers, along with the Zelensky government that is subordinated to imperialism, have also leaned on nationalism — in its reactionary anti-Russian form — to extend their interests. This anti-Russian sentiment is, of course, fostered by decades of national oppression, first under Tsarism and then under Stalinism, and now with Putin’s open denial of Ukraine’s statehood.

The United States and NATO are today again using the pretext of the “sovereignty of Ukraine” and the defense of “democracy” against “autocracy” to feed a move toward a war that will be catastrophic for the workers and all peoples who always pay the cost of geopolitical disputes that are aimed at advancing the interests of national ruling classes. The hypocrisy of the U.S. rhetoric of “democracy” could not be more blatant, as history’s countless examples of U.S.-backed military interventions and authoritarian puppet regimes show.

Today’s events recalibrate what it means to live in a time of crisis, wars, and revolutions, as Lenin described the imperialist epoch. The quest for capitalist hegemony over the world’s resources is never peaceful, and is often quite bloody. Ukraine has become a bargaining chip in this odious game.

In the face of this possibility of an even broader reactionary war, we denounce NATO and the sanctions imposed by the imperialist powers, while at the same time repudiating Russian military interference in Ukraine.

In the midst of this rivalry between powers, we see the possibility of an independent Ukraine free from foreign influence as inseparably tied to the struggle against the capitalists on all sides and for a socialist perspective. An independent workers’ and socialist Ukraine would be a tremendous source of inspiration for the working class and oppressed throughout the world and especially in Russia, where they are enduring a huge social crisis and the authoritarian policies of the Bonapartist government.

In the face of this crisis, the internationalist socialists who are part of the La Izquierda Diario International Network call for developing a united mobilization against a reactionary war, joining calls from the Left for a renewed anti-war movement. We do so especially in those countries that are part of NATO, where we denounce and oppose the imperialist policy of our own governments.