NYSNA announced an April 2 strike date for four private hospitals in NYC. One of those hospitals, Mount Sinai, nurses held a rally and speak out demanding safe staffing and a fair contract. 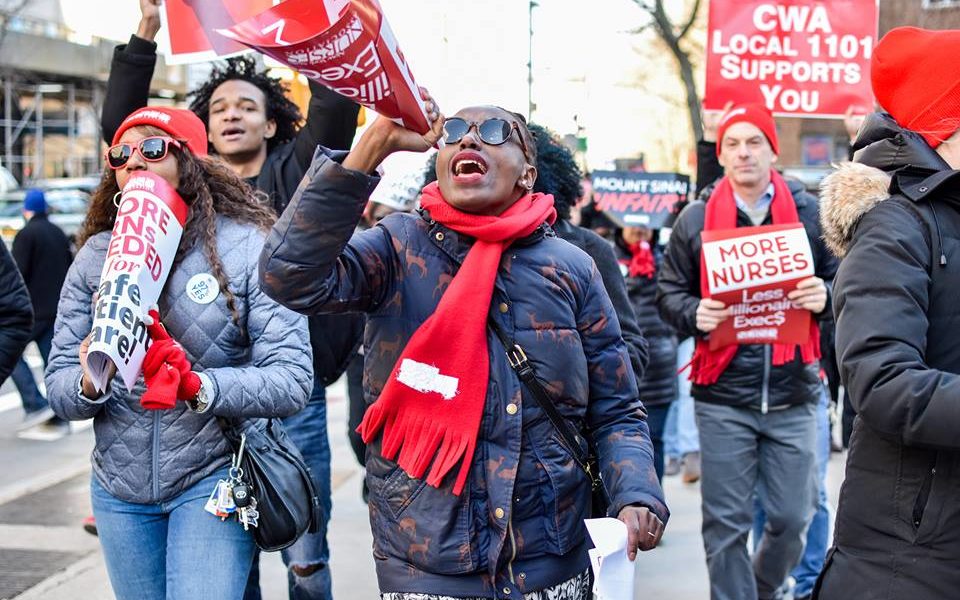 On Monday, nurses and supporters of the New York State Nurses Association (NYSNA) gathered outside Mount Sinai Hospital to rally for a fair contract. The NYSNA announced on Sunday night their plan for a strike starting April 2. Nurses’ demands are focused on patient care; they held signs that read “patients over profits” and “safe staffing or strike.”

Speeches were made before the assembled nurses marched across the street to the Ichan School of Medicine at Mount Sinai to hear more from practicing nurses and to demand safer staffing ratios. 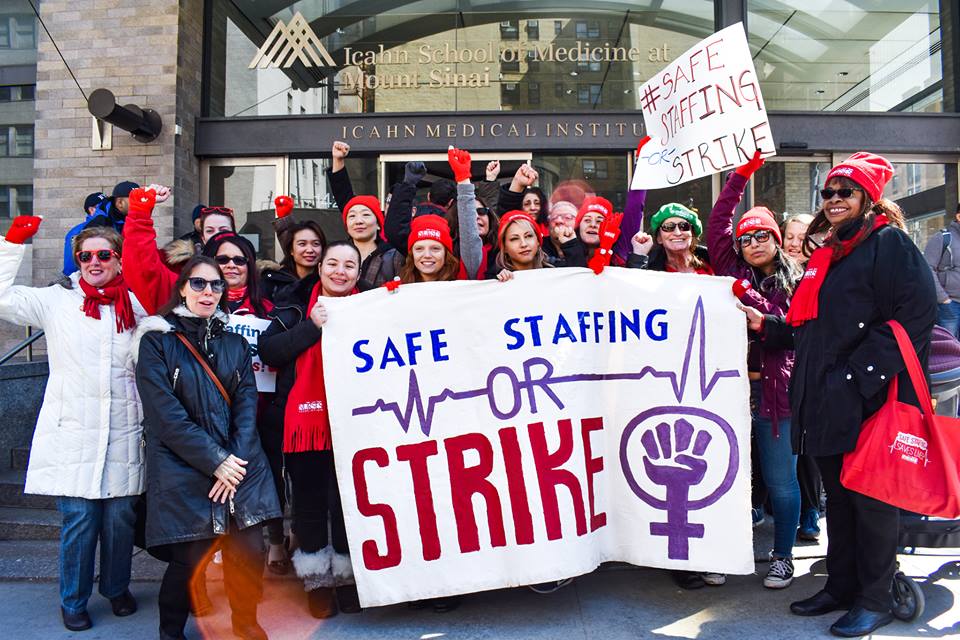 In the days leading up to the rally, 97% of nurses at Montefiore, Mount Sinai, New York Presbyterian-Columbia and Mount Sinai West/St. Luke’s hospitals voted to strike, and nurses at other New York hospitals are expected to join them. Nurses at the Brooklyn Hospital Center are voting on a strike this week, and the crowd included nurses from Brooklyn and from other area hospitals standing in solidarity with their colleagues at the “big four” hospitals. The sentiment from the rank-and-file nurses is clear: If their demands are not met, they are ready and willing to strike.

As the embedded videos show, rank-and-file nurses are passionate about what they do and angry that management has chosen to shortchange both staff and patients. One nurse declared to Left Voice reporters, “I’ve been here for 42 years and I’m very willing to go out and strike for the safety of the patients I’m looking after.” Stickers with “97% Yes” were commonly found on shirts and jackets throughout the gathering, referring to the 97% of nurses who voted in favor of a strike at the “big four” hospitals.

.
Tre Kwon, one of the speakers in front of the Ichan School of Medicine, summed up the mood of the crowd, saying, “In the next two weeks, we’re going to be ready, we’re going to get strong, and we’re not going to let [management] fill our ears with their lies.” Another nurse we spoke to added on to this sentiment and further explained the situation: “After months and months of negotiations from October up until now, the Alliance refuses to negotiate. The only thing they want to come to us with is contingencies or money. It is not about the money. It is the principle …We need safe staffing. Safe staffing saves lives.”

The crowd was not made up solely of nurses. Members of other unions also turned out in support, including CUNY’s Professional Staff Congress and the Communication Workers of America Local 1101. Kwon mentioned recent labor actions from teachers in California and West Virginia as an inspiration. The gathering closed with a rousing chant of “Who has the power? We have the power! What type of power? Union power!”

The will of the rank-and-file of nurses is strong and clear: safe staffing or strike.