After months of negotiations, graduate student workers at New York University are ready to fight for a living wage and a safer, police-free campus. 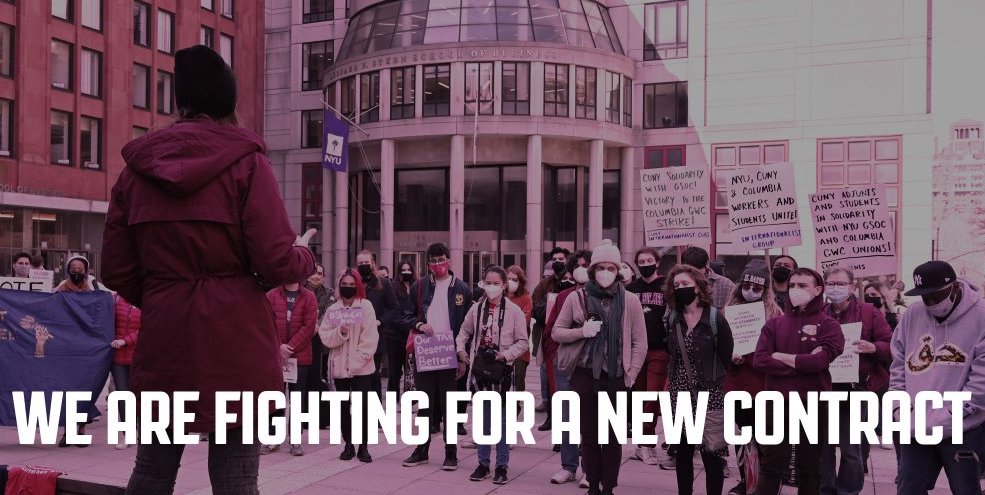 On the night of April 7, still reeling from the news that the Amazon workers’ historic efforts to unionize in Bessemer, Alabama had been thwarted by the bosses’ foul play, we learned that 96.4 percent of New York University’s graduate student workers — members of the NYU-Graduate Student Organizing Committee (NYU-GSOC) union — had voted in favor of authorizing a strike. Early this week, we set a strike deadline for April 26, just in time for finals, when the university needs us most.

These momentous escalations come after months of diligent organizing, beset by the challenges Covid-19 has posed to collective life within the university and NYU’s consistent efforts to delay negotiations.

GSOC began impact bargaining in July 2020, as the onset of the pandemic had created urgent and drastic changes to working conditions even before contract negotiations had begun. Graduate workers were displaced from their homes, struggling to teach from cramped apartments while caring for children and elderly or sick family members, and while burdened with the additional labor of transitioning to virtual curricula to keep NYU afloat.

In addition, the confluence of the pandemic and the murder of George Floyd resulted in imminent threats to the health and safety of our most vulnerable union members. Many of our workers who were already victims of targeted policing found themselves at increased risk of harassment, detainment, assault, and brutalization at the hands of the New York Police Department. Amidst the explosion of state violence around New York City, police found refuge on NYU campus; the NYPD used NYU’s campus as staging grounds for its repression of protests, and reports spread of NYU’s public safety department collaborating with the NYPD to track protesters as they made their way through the city. One formerly incarcerated graduate worker on parole provided testimony at an early impact bargaining session about his experience being re-incarcerated at Rikers Island due to a purported technical violation, placing him at the center of the center of the outbreak of the pandemic.

Apparently unmoved by the struggles of graduate workers, NYU has yet to respond to a single one of our impact bargaining demands — neither those regarding health and safety risks associated with police contact, nor what are considered more “standard” impact bargaining demands such as maintenance of positions, hazard pay, transition pay, emergency funding, PPE, and maintenance of visa status for international students. Graduate workers are still suffering from the effects of Covid-19 on working conditions, while administrators such as President Andrew Hamilton retain their massive salaries — his totals more than $2 million annually.

Our central contract demands, which still include cops off campus and Covid-related concerns, have received little more movement than we saw in impact bargaining. At the center of our efforts is the demand for a living wage. Workers today are paid $20/hour at NYU, but are subject to a university-imposed 20-hour cap per week — making for income far less than what is needed to survive in one of the world’s most expensive cities. NYU has counter-offered an insulting $1/hour raise for hourly workers. With the university’s imposed cap on weekly hours, this amounts to a meager increase of $20 a week for workers struggling to support themselves. NYU has also refused to negotiate on issues related to international and immigrant workers, outright rejecting our proposals without explanation. Despite the pronounced precariousness international workers face, NYU’s most recent contract offers them no legal or civic protections, let alone protection from ICE agents. In one bargaining session, NYU’s chief spokesperson, John Beckman, fell asleep on camera as international workers shared emotional testimonials about challenges they’ve faced due to their immigration status and NYU’s xenophobic policies. The incident serves as too easy a symbol of the university’s callousness and indifference to the needs of graduate workers.

NYU’s refusal to pay workers a living wage and ensure standard benefits such as health care is irrefutably linked to the nexus between tuition financed by student debt, the investment of tuition revenue in real estate expansion, and NYU’s links with the NYPD and the prison-industrial-complex more generally. NYU is considered by many as the epitome of aneoliberal university, “a private university in the public service,” as it boasts, with campuses situated across the globe in Shanghai, Abu Dhabi, and Tel Aviv. In New York City, NYU is the second-largest real estate owner (surpassed only by Columbia University) and defends its private property with the full force of what New York City Police Commissioner Dermot Shea describes as “an unceasing collaboration” with the NYPD. NYU’s Board of Trustees is home to villainous figures such as Larry Fink, CEO of Blackrock, the largest investor in private prison and detention companies CoreCivic and GEO Group.

The university’s record on labor is, of course, no better. In 2015, a report revealed that NYU had violated numerous labor regulations in the construction of its Abu Dhabi campus at the expense of 10,000 migrant construction laborers, making clear once again that the university prioritizes its market interests over the safety of Black and brown workers. Galvanized by NYU corruption and the role NYU has played in ravaging urban neighborhoods both in NYC and abroad, GSOC has insisted on the need for a contract that advances racial and social justice at NYU with demands that include protections against ICE and other immigration agencies, power-based harassment, and more.

In 2002, NYU became the country’s first private university where graduate students unionized. As such, GSOC plays an important role in setting the tone for graduate student organizing. For this reason, the bargaining committee has continued to argue that police violence is a health and safety issue deeply connected to our most essential working conditions. Our rights as workers are inextricably linked to our right to be free from police violence and to bargain over the mandatory issue of health and safety. So long as NYU continues to voluntarily collaborate with the NYPD, our most vulnerable workers remain at risk.

GSOC’s health and safety demands are part of a growing movement around the nation to imagine and institute police-free campuses. Perhaps the most notable of these recent efforts is UCFTP’s efforts to abolish the University of California Police Department by Fall 2021. Many schools within the Cops Off Campus coalition have drawn attention to universities as settler institutions, to their provenance within racial capitalism, and universities’ contributions to the state’s racial violence. GSOC has made the case that police violence, while crucially rooted in anti-blackness, is also a workers’ rights issue. Time and again, NYU has refused to acknowledge police presence on campus as a health and safety threat, despite hearing numerous grad worker testimonials about experiences of physical violence, PTSD, and other mental illness at the hands of the police, and despite the additional risk posed by Covid-19 and the ongoing presence of unmasked cops throughout our hallways, to whom NYU has been given liberal access to university buildings.

Having authorized a strike, it is now up to NYU to determine the next stage of negotiations. In 2015, GSOC authorized a strike, with 95 percent of the rank-and-file members voting yes, before NYU caved with a number of contract concessions. This time around, NYU seems intent to impose its austerity measures in the wake of the pandemic, and is equally unrelenting in its willful disregard for the violent police practices that pervade campus. The 1,336 graduate workers who have expressed their readiness to strike is evidence of the immense hardship graduate workers are facing, but also of the power our bargaining unit has built over the past five years through the tireless efforts of graduate organizers struggling to improve the lives of members.

The movement, though, exceeds our members. GSOC workers draw support from undergraduate comrades, more than 100 of whom recently went on strike over their wages as engineering teaching assistants; from Columbia University’s rank-and-file strike; and from the surge in radical labor efforts emerging throughout the city. We need a broad coalition to fight for these demands, whose ramifications go beyond the strictly “economic” needs of workers. The implications of this collective fight would be significant as the labor movement increasingly takes its place in wider struggles for racial and social justice.