Teaching assistants and research assistants at the university are demanding better pay and sexual harassment protections. This week’s strike comes 50 years to the day after 700 Columbia students were arrested in protest of the Vietnam War and the school’s expansion into Harlem neighborhoods. 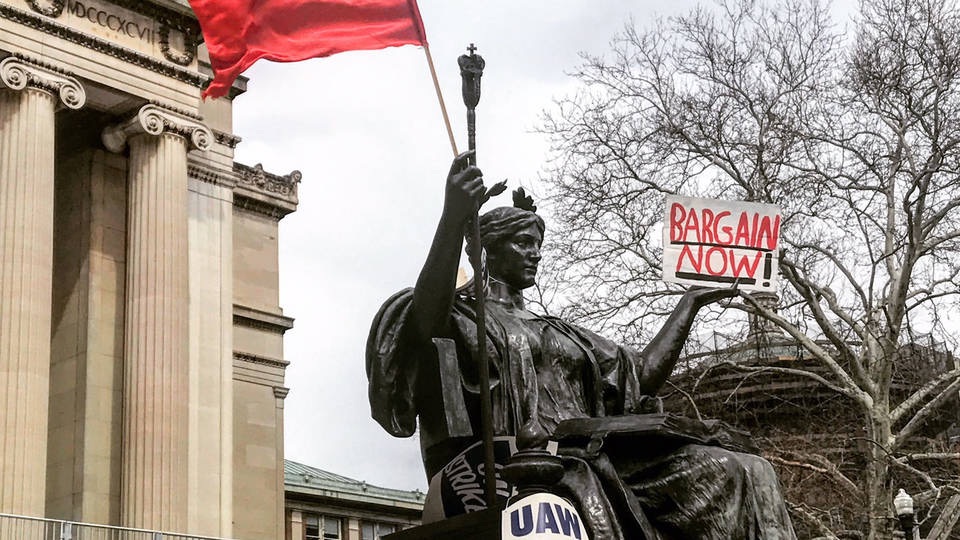 Graduate students at Columbia voted to unionize a year and a half ago, yet the administration has refused to sit down at the bargaining table. In response, hundreds of graduate students, who work as teaching assistants and research assistants, alongside undergraduates and faculty supporters, are walking out of classrooms during the last week of the semester.

At the picket on Tuesday, students shouted chants such as, “What’s disgusting? Union-busting,” and “New York is a union town.”

Michael Watzka, an international student in the Germanic Languages Department said that he was striking because “the university does not think that we are workers. We are working here, but the university is saying that we are not doing work. The university is spending millions of dollars on top lawyers when they could be spending the money on dental care for employees, for example.”

Several students also spoke about the issue of sexual assault, which the university has tried to cover up for many years. The contract that the union is proposing would address these issues, as well as demands for wage increases, and protections for international students, among others.

Two Columbia workers from Local 2110 whose contract is up next year, also came to support “to fight against the unfair treatment. We’re supporting our brothers and sisters in the union because they need it.”

Tania Bhattacharyya, a doctoral candidate in history and an elected member of the bargaining committee said that, “We all understand that all of these university administrations pay the same amount to union-busting lawyers, and it’s very clear for all of us to see that.” When asked about the Columbia strike’s relation to other graduate student struggles in the U.S. she noted, “I think that this is only going to grow into a larger and more coordinated movement across campuses and some point in the future hopefully multiple universities across the US will be striking together.”

The strike is set to end on April 30, the same day on which the mass arrests were made 50 years ago. It is important to remember that the student struggle at Columbia is one of many across the U.S. (including at the City University of New York and the University of California system, where students are also due for a new contract), and globally, as well as the importance of linking up with labor struggles across the U.S., such as those of the teachers in Arizona, and Colorado, among others.