Over 300,000 Farmers Have Begun an Indefinite Siege on India’s Capital

In a powerful rebuke to Narendra Modi’s three pro-capitalist agricultural laws, hundreds of thousands of farmers have traveled from across India for protests in New Delhi and blockaded its main arteries. 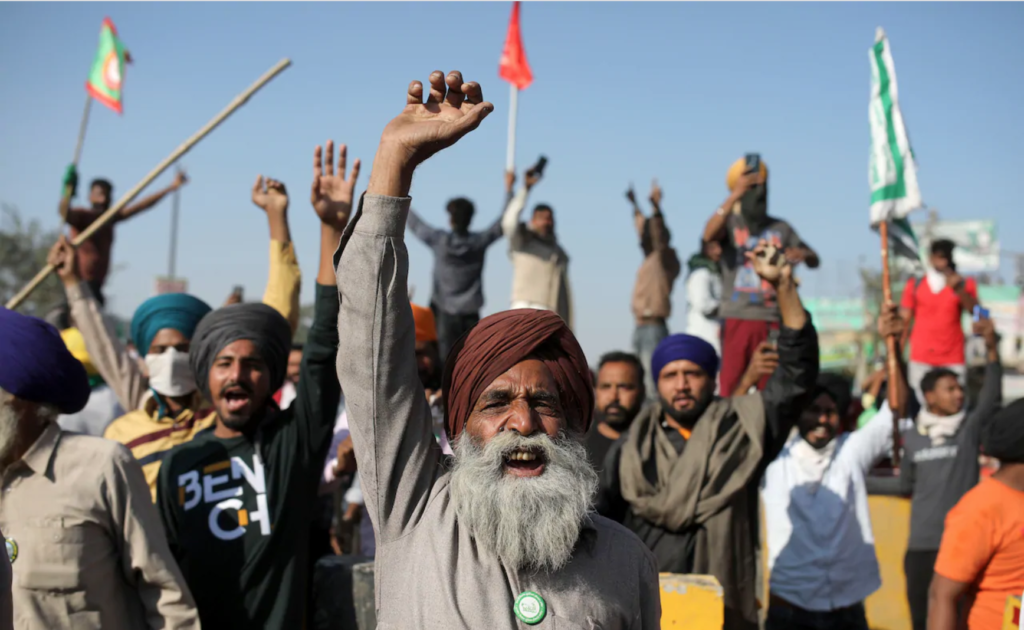 For months, farmers across India have been protesting against three new pro-market laws passed by the Narendra Modi government — a fight that is increasingly coming to a head. In a stunning rebuke to Modi’s growing privatization measures, over 300,000 farmers, with the support of workers and social movements, have been mounting the pressure on Delhi to withdraw these laws.

Passed by the Indian parliament in September, these laws will allow farmers to sell their produce directly to private buyers instead of at the state-regulated marketplace and allow farmers to enter into a legal contract with companies before planning their harvest. The law would also allow for the hoarding of food grain until one gets better prices, a move which was illegal up to this point. This is yet another blatant attempt by the Modi regime to further privatizations in India and increase capitalist profits. Termed the “black laws” by farmers, these measures will lead to the corporatization of the agricultural sector and farmers will be left at the mercy of large corporations who will have better bargaining power.

Prior to this measure, farmers sold  their produce to middlemen in the Agriculture Produce Marketing Committee (APMC) mandis, a government regulated market place, under a Minimum Support Price (MSP). These middlemen would then sell the produce to state-led or private enterprises. At the APMC mandis, the state would also collect taxes on each transaction. While the mandi system was far from perfect and needed reconfiguration, these new laws de-regulated and opened up this key, centralized sector to the free-market. Prior to these measures, farmers were guaranteed a minimum price for their produce and an accessible marketplace where they could sell their goods regularly, without having to take on the additional costs of stockpiling goods — a cost that would run high for small peasants. Now, farmers and peasants will be at the mercy of giant corporations, who will have better bargaining power and will dictate the prices and contract terms.

These measures come at a time when farmers have been demanding relief from the state for years. Although it amounts to 17% of India’s GDP, the agriculture sector employs half of the country’s 1.3 billion people. A majority of these workers live off of small plots of land and are burdened with debt. For years, farmers have been driven further into poverty by crop failures due to climate change and the falling prices for produce. Unable to make ends meet or pay off increasing debts, many farmers each year resort to taking their own lives. Now, ignoring the calls for higher guaranteed minimums on MSPs and unconditional debt forgiveness, the Modi-led government has the audacity to paint these predatory privatization measures as “relief.”

In his monthly radio address, Modi denied any duplicity and continued to defend these bills, painting them as liberatory. “These reforms have not only broken the shackles of farmers,” he said, “but have also given new rights and opportunities to them.” In reality, the shackles are simply of a different sort — and they are tighter than ever.

Protests by farmers against the three laws started as early as August of this year, but have been escalating since they passed in Parliament in September. Farm unions called for a strike in September, with protests shutting down major agricultural states like Punjab and Haryana. Earlier in November, farmers in over 20 states participated in coordinated protests, putting up blockades on major streets and highways at over 5,000 different locations.

This was only a precursor to the events that are currently unfolding, where hundreds of thousands of farmers, in the Delhi Chalo (Let’s Go to Delhi) campaign, are marching on Delhi for demonstrations outside the Parliament. With widespread popular support and travelling by tractors and trucks, many of them reached Delhi last Thursday, when 250 million workers across the country organized a general strike against Modi’s anti-worker and pro-corporate laws, and had shut down large parts of the country. Thousands of farmers who entered New Delhi were met with brutal repression by the police, who violently attacked and used tear gas and water cannons on the protesters.

The protesters, however, haven’t backed down. Breaking through police barricades, protesting farmers are now blocking some of the main borders and roads that lead to Delhi. At its border with the state of Haryana, for example, farmers have blockaded the highway for days at end, refusing to move to the designated ground offered by the government. In the days following, more such bordering highways have been shut down by farmers, while more protesting farmers journey to the capital from all over the country, traveling thousands of miles for this escalation. Together, they have threatened to block the roads to Delhi at five key entry points. The Union Minister, Amit Shah, amid the escalating protests, has offered to meet with the farmers to discuss the issue, if they moved to Burari park, the designated protest grounds. The farmers, since then, have declined the offer, rebuking the preconditions placed upon by the state which would destabilize the current pressure they’re mounting.

In addition, the ruling Bharatiya Janata Party (BJP), the party of Narendra Modi, continues to try to paint the protests as “anti-national” — their favorite moniker for whoever disagrees with their decisions. Instead of turning public opinion against them, however, the protests have only gained widespread support across the country among workers and social movements, who continue to display solidarity with the people they see as feeding the country. Over 500 farmer unions have declared their support for the ongoing action. Amidst the general strike on November 26, labor groups and social movements organized road blockades in Mumbai, one of the country’s chief economic hubs, in protest of Modi’s labor and farm bills. During the strike, labor unions, in addition to fighting for their slate of demands, spread messages of solidarity with the farmers’ struggles. All the khaps (local community organizations) in neighboring Haryana have unanimously declared their support for the protest and will go to Delhi to support the movement. Some of the women who participated in a months-long occupation last year in the Shaheen Bagh neighborhood in Delhi, blockading a major transport route in protest of the Citizenship Amendment Act (an act that discriminates against undocumented Muslims and set the grounds for religion-based citizenship), have also been visiting the farmers’ encampments to show solidarity and support. One of the faces of the Shaheen Bagh protests, octogenarian Bilkis Bano, was arrested today for her participation in the protests. Social movement and community organizations from across the country have poured in with support for the thousands preparing to take on the city.

On the Path to a General Strike, Again

The general strike on November 26, called by 10 central trade unions and over 250 farmers organizations, was arguably the largest in the world. Over 200 million workers across strategic sectors like steel, mining, telecommunications, transport and banking went on strike, paralyzing the country. This coincided with the arrival of thousands of farmers to Delhi where they have since taken over major roads and borders. The strike showed the strength of the masses and the strategic position and immense power workers hold.

But a single-day strike is not enough. The current farmers’ protests have been one of the biggest challenges to the Modi regime. Although the BJP government holds a comfortable majority in the seats of government, these protests have deeply challenged their ability to rule with impunity. To decisively win not just the demands raised by the farmers, but also make important gains for all the toiling masses of the country against the capitalist class, it is imperative that workers join in this struggle with the peasant masses. Workers need to go beyond the limits imposed upon them by the reformist and Stalinist leaders of the largest trade union bureaucracies (like the Center of Indian Trade Unions, the All India Trade Union Congress and the Indian National Trade Union Congress) and fight alongside the hundreds and thousands of farmers with the strongest tool in their arsenal: the strike.

“The peasants must know that the red banner which has been raised in the towns is the banner of struggle for the immediate and vital demands,” Lenin said in 1905, “not only of the industrial and agricultural workers, but also of the millions and tens of millions of small tillers of the soil.”