Spanish women are protesting against a culture of sexual assault at San Fermin’s annual bullfighting festival, after a British teen was reportedly raped. Verónica Landa says it’s time the world heard the truth about Pamplona 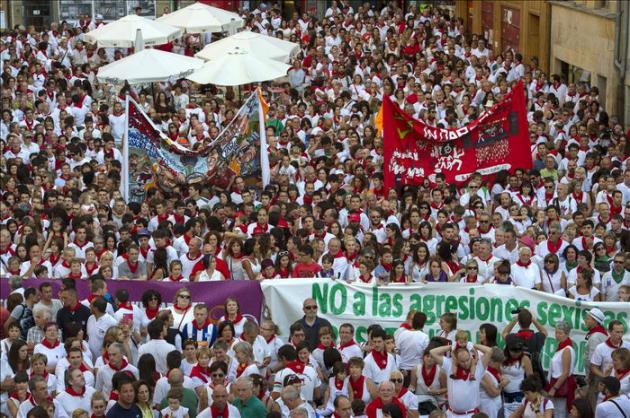 Originally published in The Telegraph

Throughout the seven days of the annual San Fermin bullfighting festival – which took place last week in Spain – hundreds of alleged sexual assaults were reported.

These range from women being groped to sexual assault and even to rape. There are few statistics to show how widespread this is – especially as many women don’t report the incidents – but feminist groups in Navarre (the region the festival takes place in) say they get hundreds of complaints from women attending the Pamplona festival.

Most people recognise the ‘chupinazo’ – the name given to the start of this festival – as the most dangerous time for women. When their tops lift up, or their clothes are ripped as the bulls run by, they’re frequently groped.

In the past, photos of this have, unfortunately, gone viral online.

Last week, when this year’s festival began, there were reports of a 19-year-old British woman having been sexually assaulted in a bathroom by six men, before two friends rescued her.

It sparked protests from hundreds of women who gathered outside Pamplona’s city hall holding up signs saying ‘enough’.

Things are reaching a tipping point, but sexual assault at San Fermin is nothing new. For more than 15 years, feminist and social movements have been fighting to eradicate this culture of sexual harassment, which goes on under the pretext that ‘anything goes at festivals’.

In the last four years, the debate has sprung up in the media with more force than ever. But most of the time, it just misses the point.

The majority of the discussion around sexual assault at the festival avoids criticising the patriarchy and its multiple forms of aggressions towards women. Instead, it tends to do the opposite.

Take the publicity surrounding the festival. It could blatantly condemn this sexism, but instead, it promotes it.

A 2015 poster advertising an Andalusian tour operator is a good example. The poster shows a silhouette of a bull with a bra hanging from its horn.

But it isn’t the only culprit. Much of the festival merchandise on sale depicts images of the ‘chupinazo’ as something sexual. 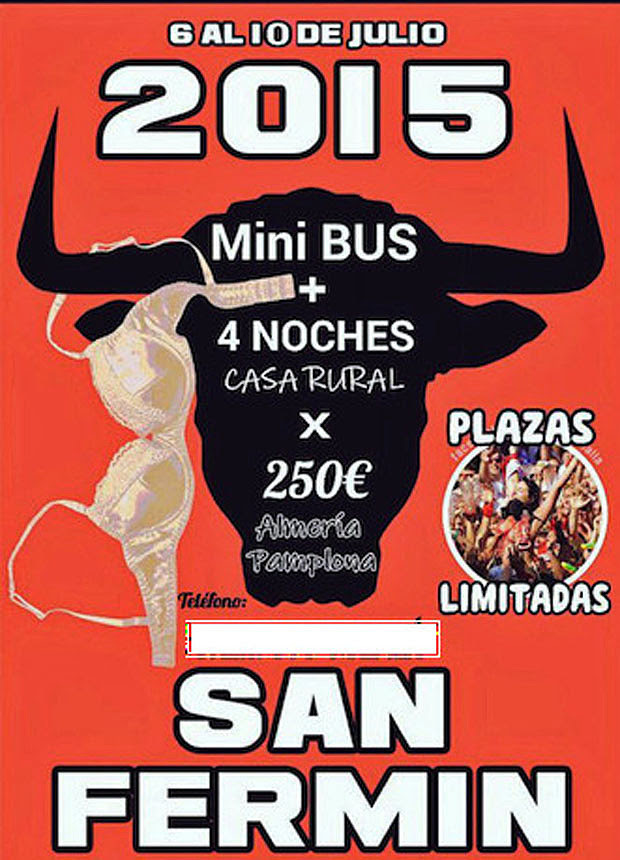 These campaigns have been criticised by Pamplona’s relevant authorities, such as the Federation of Pamplona’s Clubs, who have said that the only thing this type of publicity provokes is the legitimacy of sexual assault.

Even the Kukuxumusu brand – which designs merchandise and publicity campaigns – was criticised for sexism. Specifically, it had to withdraw a campaign that showed people in traditional festival clothing, as the only woman was drawn lifting her top to show her breasts.

This type of publicity ignores – and potentially increases – the reality of sexual assault at Pamplona.

If you’re a journalist at San Fermin, you’re at risk of sexual assault. Hundreds and hundreds of media are sent to cover the festival and most of them are women.

One of the cases that had the most impact was when a reporter for a public Spanish TV channel was sprayed with wine, and then kissed without her consent on screen. The news presenter then jokingly told her to stop provoking the young man who had just assaulted her.

This year, 25 journalists from 14 Navarre newspapers came together to support the campaign ‘For festivals free of sexual assault’.

It was launched by Pamplona City Council, which has been creating campaigns to prevent gender violence and raise awareness of it for a couple of years. This year’s campaign featured a logo of a red hand, showing the rejection of violence.

But is it enough?

A number of local feminist groups, though they welcome the council’s efforts, criticise the fact that they’ve been alone in fighting this battle for years. To them, the council’s motivation stems more from wanting good publicity than a real desire to end the sexual assaults.

They complain that even really serious cases, like that of Nagore Laffage, a young woman who was killed in San Fermín in 2008 by a man she refused to have sex with , have been widely overlooked.

To me, the council’s efforts aren’t enough. In a way they’re even reinforcing the sexist and patriarchal idea that the onus is on women to prevent sexual assaults, or know how to deal with them, instead of on the perpetrator.

Campaigns like these, just focused on one part of the year, are not enough to break a cycle of patriarchal domination that oppresses and exploits millions of women across the world.

So until all of this sexism that legitimises sexual objectification and harassment towards women is eradicated from our society, we won’t see an end to the type of assaults that take place at San Fermin.

A version of this blog was first published on Pan y Rosas . It has been translated for Telegraph Wonder Women.