Patriot Act 2.0: Biden’s Domestic Terrorism Laws Are a Danger to the Working Class

After last week’s violent demonstrations at the U.S. Capitol, Joe Biden has committed to passing new laws targeting domestic terrorism. But let’s be clear — while he says the laws will help “fight” the Far Right, they will eventually be used to target the working class and the Left. 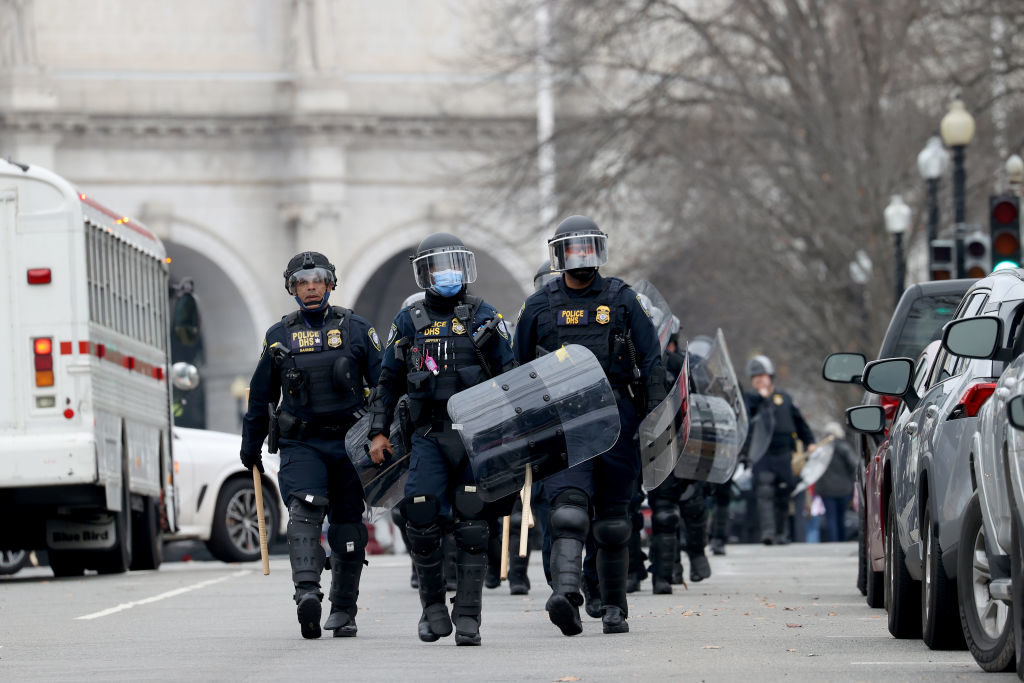 Last week, the world watched as a mob of far-right Trump supporters stormed Capitol Hill. Responding to Trump’s calls earlier in the day, this group not only managed to temporarily halt the certification of the Electoral College vote, but also sent elected officials and staff scurrying for cover. Now, with the support of President-elect Joe Biden, elected officials are clamoring for a new domestic terrorism bill ostensibly geared towards eliminating neo-Nazis and proto-fascist groups. But make no mistake — such a bill will only serve to strengthen the bourgeois state’s repressive apparatus and will ultimately be used to target and attack the working class and the Left.

Soon after last week’s attack, Democratic Senator Dick Durbin announced that he would reintroduce his own domestic terrorism bill. First introduced in March 2019, the Domestic Terrorism Prevention Act passed in the House but was blocked in the Senate by Mitch McConnell. Although the bill’s text was based on findings of white supremacist violence, the proposals set forward by the bill were more far-reaching. It endeavored to create new agencies under the Justice Department, Department of Homeland Security, and the Federal Bureau of Investigation designed to find, report, and combat “domestic terrorism” including, but not limited to, white supremacists.

Now, along with Durbin’s proposed reintroduction of the bill, Biden too has announced his intent to draft and enact a new anti-domestic terrorism bill, saying he’ll make it a priority to pass such legislation soon after he assumes office next week. In addition to making the bill a priority, Biden has also been urged to create a White House post that will oversee the fight against ideologically-inspired violent extremists and provide increased funding to combat them. Proposals to Biden’s transition team for the first 100 days of his presidency also call for the passing of more “red flag laws” that will allow authorities to temporarily take away arms and ammunition from those the state identifies as dangerous.

In light of recent events, furthermore, the incoming administration has not only gained new support from the ranks of the Republicans and the Right who are trying to distance themselves from Trump and Trumpism, but also from sectors of the Left, who see these attacks as portents of bigger threats from the Right that need to be tackled in order to “save the nation.” With these forces lined up now behind the Biden administration, it is likely that Biden will be able to generate the consensus necessary to pass his domestic terrorism bill and other related regulatory measures.

Progressive Democrats like Alexandria Ocasio-Cortez took to Twitter to denounce these measures. In a tweet last week, she said that she believed that the attack on the Capitol was a result of a failure to use existing resources, not a lack of resources to meet the moment. However, if recent record is any indication, the progressive wing, which continues to form a minority wing in the Democratic party, has little influence on the party line. While progressives claim to use their massive platforms to speak “for the people,” in actuality they always either fall in line in the chambers of Congress, or form little more than a silent opposition. Durbin’s 2019 bill, in fact, counts Bernie Sanders among one of its co-sponsors in the Senate. In addition, AOC and others, who ran for office with the explicit promise of fighting back against the bipartisan political establishment, have simply fallen in line behind the establishment’s response to the attack last week; parroting the Party line, they have lionized the institutions of the U.S. state and called the attack an attempted coup, which will only be used to build consensus around strengthening the U.S.’s repressive forces in the name of “fighting the Right.” Once again, despite their protestations and belief that they can “transform” the party and reform U.S. democracy, progressive Democrats continue to serve the interests of the capitalist class.

With the Capitol, the symbol of American “democracy” so violently attacked and the U.S. regime now humiliated in front of the very capitalist world order it leads, the restoration project that Joe Biden represents becomes more acute. In addition to restoring the strength of U.S. hegemony globally, the Biden administration will now also have to show that the state can effectively neutralize this threat from the Right. With control of 3 of the 4 chambers of government, the Democratic party establishment is now preparing to do so through this new bill, that will almost certainly give additional resources and powers to law enforcement agencies and be used against working people and the left.

You might be interested in: Biden’s Calls for “Unity and Healing” Are All About Bipartisan Capitalist Stability

One only needs to look at the passing of the Patriot Act in 2001 to look for evidence of what’s to come. Passed 45 days after the 9/11 attacks, the Patriot Act, with the “aim” of identifying and eliminating all threats of international terrorism, passed almost unanimously in both chambers, with 66 dissenting votes in the House and only 1 dissenting vote in the Senate. In the years that followed, the Act gained notoriety and has been used to spy and surveil regular working people. Armed with new powers, federal agencies like the National Security Agency were able to track and collect phone and internet records and credit card activities of essentially any one they wanted, turning innocents into suspects. New security acts post-9/11 also increased racial profiling of South Asian and Arab communities, whether it was through increased and additional screening at ports of entry or through the creation of special databases for all Muslim men from a list of Islamic countries who now had to register and provide fingerprints just by virtue of their ethnicity and religion. Elected officials who “feared” that these surveillance measures would go too far built in sunset clauses that would ensure those provisions would expire after a period of time — clauses that have been renewed by both Bush and Obama administrations. Current president-elect Joe Biden, in fact, proudly claimed his role in the formulation of the Patriot Act — which was modeled on his own 1995 Omnibus Counterterrorism Act after the Oklahoma City bombings — and lamented that it didn’t go far enough, for the new bill had removed provisions that would have given the police more powers of surveillance.

That such a domestic terrorism law now would be more of the same isn’t idle speculation. Aimed at strengthening the police, law enforcement, and intelligence agencies, any new domestic terrorism bill or measure would give more power, funding, and resources to agencies like the FBI and NSA who’ve historically used their state powers to hunt down and neutralize the Left. From infiltrating and breaking up the Communist Party in the 50s to targeting and decimating the Black Panther Party and the New Left through the 60s and 70s, the FBI has used programs like COINTELPRO to crush the Left under the guise of weeding out “extremism.”

The events of January 6 were violent and frightening, and showed that Trumpism will be far from defeated with the departure of Trump from the White House. But Trumpism itself is a product of the failures of the neoliberal order that had little to offer except misery for working people and the oppressed while it shored up profits for the ruling class. Now, one of the very corpses of neoliberalism is primed to take the highest office in the land, with promises of “business-as-usual” in the midst of a pandemic and economic downturn that has disproportionately affected the working class. Armed with new anti-terrorism bills under the guise of “fighting the Right,” Biden will not hesitate to unleash these same apparatuses against the Left. From suggesting that police “shoot them in the leg” to authoring the 1994 Crime Bill and the War on Drugs, Joe Biden is the very architect of a carceral system that disproportionately targets and disenfranchises Black and Brown people. Biden, like the Democrats who have risen to the presidential office before him, is no friend of the working class and the Left.

We can’t leave the task of fighting against the Far Right in the hands of the very state agents who repress us with impunity, or believe that the same offices that gas and kill us will not use these new weapons against us when we threaten their rule. To fight back against not only the Far Right, but also against the Biden administration and the bourgeois order he protects, we need to unite and fight with all our strength as a class, with our methods and program.