Peru: Not Vizcarra. Not Merino. For a New Constituent Assembly.

The Peruvian parliament recently approved the ouster of the current president, Martín Vizcarra, deepening the already existing political crisis. Here, we publish the statement released by our comrades of the Socialist Workers Current in Peru. 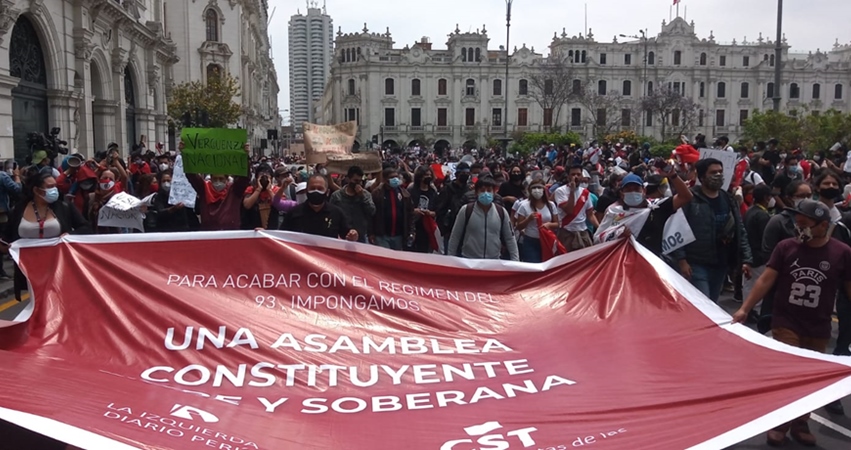 The fall of Martín Vizcarra, Peru’s president, is part of a long and deep political crisis. The crisis of 1993, when then president Alberto Fujimori dissolved the Congress of Peru as well as its judiciary and assumed full legislative and judicial powers. Ever since the ties between the Odebrecht company and politicians and state officials were made public in 2016, many former presidents have ended up in prison, including one who committed suicide to avoid his sentence.

This most recent crisis of the Peruvian regime began to manifest itself when former president Pedro Pablo Kuczynski was forced to resign in 2018 — a year after he took office — because of his ties to the business community. Now Vizcarra, after only two years in office and with more than eight months left in his term, has been ousted by Congress over accusations of corruption for his ties with private companies. The paradox is that most of the members of the current Congress are also involved in corruption scandals involving their business ties.

These facts highlight how capitalist interests permeate the Peruvian state and its institutions. Sectors of business control politicians, even those who, like Vizcarra, touted themselves as “leaders against corruption.” Marx’s definition of the capitalist state is more valid than ever: a “board of directors that governs the collective interests of the bourgeois class.”

With this understanding, Vizcarra’s ousting does not end the political crisis in Peru, but rather opens a new scenario of disputes among established powers, which will inevitably favor the interests of imperialists and the interests of the ruling class.

Let us remember that this regime was imposed in 1993 by Fujimori during his “auto-coup” and finds legal support in Peru’s current Constitution. All of Peru’s political parties are now aligned — including those who defend Vizcarra’s ousting and support the new president, Manuel Merino; those who side with Vizcarra; and those who propose solutions considered intermediate, such as the consensus cabinet.

This legal order, expressed in the Constitution of 1993, serves the bourgeoisie by defending private property. Likewise, it is anti-democratic because it restricts the participation of working people in decision-making. For that reason, the state has implemented various political initiatives since it came into effect which have substantially limited the workers’ rights and notably favored the enrichment of big corporations, both national and foreign.

It is anti-democratic also because every time there are political crises like the current one, power is taken by yet another representative from this same caste of corrupt politicians who are faithful defenders of the interests of the bourgeoisie. Thus, when Kuczynski fell, Vizcarra was imposed, and now that he is out — following the guidelines of the 1993 Constitution — they have imposed Merino, the neoliberal representative of one of the most corrupt parliaments of recent times.

While this is happening in the upper levels of the state, thousands of workers are losing their jobs every day, and their labor rights are being cut; their working hours are being extended, and their wages are being reduced. This is a result of Vizcarra’s adjustment measures, implemented with the help of the National Confederation of Private Business Institutions (CONFIEP), using the story of economic recovery to undermine the fight against the pandemic.

Yet, the rate of Peruvians infected and killed by Covid-19 continues to grow, as do the figures for poverty and extreme poverty. For millions of workers and impoverished sectors that today find themselves without work, with poverty wages or infected by Covid-19, neither Vizcarra nor Merino governed the country, since these politicians, protected by the legal system in force, are at the service of a minority of big businessmen who are getting rich at the expense of the hunger of the working people, even in these times of health crisis.

As we can see, the economic crisis is growing, and those who are most affected are the workers and the poor. So, it is demagogic to say, as Veronika Mendoza of Juntos por el Perú does, that the core problems of the country will be solved with the 2021 elections and that “all corrupt people will be removed.” Stirring up such a campaign in this time of crisis only helps decompress the social anger that is beginning to emerge in vast sectors of the population. These politicians are betting on the elections of 2021 as the only way out in the long run. In doing so, they are giving the bourgeoisie time so that, along with the current political class, they can continue to impoverish workers and the masses with adjustment plans, just as Vizcarra has done up to now. Likewise, giving confidence to the Merino’s new government, as the Frente Amplio (Broad Front) is doing — even suggesting policies — strengthens the current reactionary institutions and contributes to social demobilization.

The core problem is not about changing governments. The core problem is to put an end to the regime of capitalist domination imposed on us by the bourgeoisie. To advance on that road, the working class must enter the scene with its own methods of struggle and its forms of self-organization. For that to happen, we must demand, alongside the workers, that the leaderships of the big trade union centers, like the Confederación General de Trabajadores del Perú (CGTP), call a national meeting of workers and popular sectors as soon as possible, to discuss and approve a plan of struggle on a national scale. The main objective of such a plan would be to implement a general strike, which would make the bosses back down from implementing their adjustment plans, which the government of Merino will surely continue to apply. This general strike will also help us impose, through mobilization and workers’ and popular self-organization, a free and sovereign constituent assembly, which will enable us to put a definitive end to the 1993 regime, which is the concrete legacy of Fujimorism.

This constituent assembly should have both executive and legislative functions. One of its first measures should be to implement an emergency plan that will ensure that working people no longer have to pay for the consequences of this deep economic and health crisis. Therefore, it will repeal all of Vizcarra’s anti-labor and pro-employer policies, as well as those that were approved by the previous governments, which are regulated in the 1993 Constitution. In this constituent assembly we will make political representatives fully revocable if they do not fulfill their commitments, and they will earn the same wages as that of a worker or a schoolteacher. We will also vote to make judges and prosecutors elected by universal suffrage and to also earn a workers’ wage.

So that we can have a quality public health and education system, we will approve the nationalization of our natural resources and the strategic companies linked to mining, which should be put under workers’ control and under the supervision of the organized masses. Likewise, so that small producers, like peasants and small merchants, can have access to credit with zero interest, we will fight here for the nationalization of the banks and foreign trade.