Police in Chile Push a 16-Year-Old Off a Bridge

A shocking case of repression: the military police Carabineros in Santiago push a teenager off a bridge. One officer has been arrested, as protests have erupted across the country. 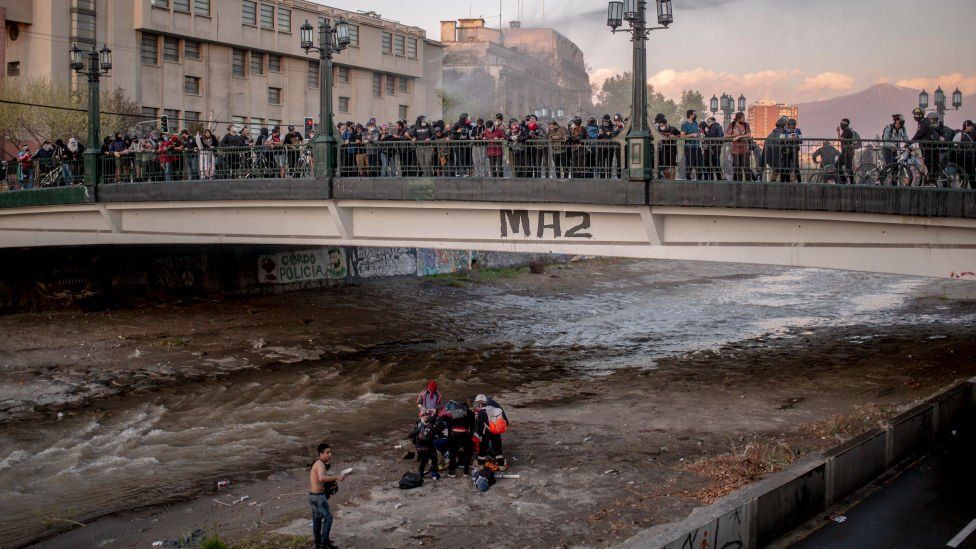 Demonstrators pull the 16-year-old from the water, minutes after they were pushed off the bridge. (Getty Images)

The disturbing scene was caught on a grainy video: several hundred protesters are running across a bridge in the Chilean capital of Santiago. A police officer in olive green riot gear dashes at a 16-year-old and pushes him over the railing. The teenager falls headfirst seven meters (more than 20 feet) into the Mapocho River. After floating facedown and motionless, he is then pulled onto the riverbank and resuscitated by demonstrators.

This happened on Friday. The young person is now in hospital, with broken fingers and further injuries, but conscious and no longer in critical condition. Chile, in contrast, is in a state of maximum tension. As our sister site La Izquierda Diario Chile is reporting, protests took place across the country on Saturday.

The level of impunity enjoyed by Chile’s military police, the Carabineros, is astounding — even compared with U.S. cops. A colonel from the Carabineros said on Saturday that: “I want to categorically deny this type of situation. (…) Enough of lying to people about things that Carabineros have never done.” Even in the face of video evidence that could not be clearer, these pacos (Chilean slang for cops) will try to deny what everyone can see. Their stunningly arrogant tone is typical of an institution that has not changed since the days of the Pinochet dictatorship.

The eruption of protests obliged the public prosecutor was obliged to have the officer arrested on suspicion of attempted murder, pending further investigation. It is, after all, less than two weeks until the first anniversary of the social revolt that shook Chile last year. On October 18, 2019, tens of thousands of young people took to the streets. The initial spark was a fare increase of 30 pesos for public transport in Santiago. But as demonstrators explained: “It’s not 30 pesos, it’s 30 years!” The last 30 years since the end of the military dictatorship have been marked by neoliberalism, repression, and a totally undemocratic regime.

A week later, millions of people took to the streets in Chile’s largest mobilizations ever. (Left Voice published dozens of articles reporting on and analyzing the movement in Chile, mostly from socialists on the ground.) During the protests, the police — especially the Carabineros — were responsible for horrific and systematic violence. Independent investigators have estimated that in the first month of protests, police murdered two dozen people and injured 1,400 with firearms. This includes over 200 people who had one or both eyes destroyed. Even Human Rights Watch has spoken of serious abuses, especially by the Carabineros.

The right-wing government of Sebastian Piñera is clearly worried that a spark like this could be enough to ignite a new mass movement. The government, however, has little to fear from the parties of the reformist left. They have condemned this attempted police murder and called for reforms of the Carabineros. But the Communist Party, the Frente Amplio (Broad Front), and the leaders of the unions have refused to call for mass mobilizations so far. They are putting their hopes into an undemocratic and stage-managed constituent assembly that Piñera has called to give new life to the regime.

Different groups from the revolutionary socialist Left have initiated a “Command for a Free and Sovereign Constituent Assembly,” which can only be organized via mobilizations against the regime. Socialists call for the immediate dissolution of the police. The attempted murder at the Pío Nono bridge shows yet again that this regime inherited from the dictatorship cannot be reformed.