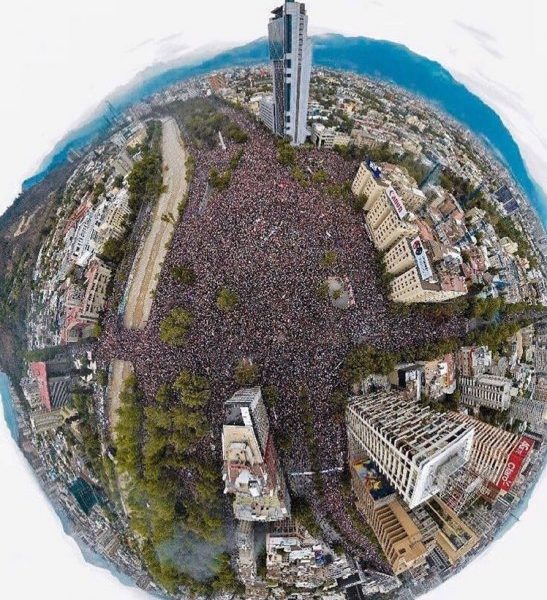 Millions mobilized today. Santiago experienced the largest demonstration in almost 30 years of democracy—some 1.2 million people according to municipal authorities, although there were actually more. It was the same throughout Chile, from north to south: massive waves of people demonstrating in the streets. The entire country is talking about what is being called on social media the “largest march in Chile,”  which was joined by hundreds of social organizations.

The massive mobilizations expressed diverse social sectors, with youth and the middle classes prominent. Workers also intervened, with their organizations, although only in more limited places such as in Antofagasta— the country’s major mining region. Thousands of young people and indigenous peoples from different parts of the country, living on society’s fringes, also participated in the demonstrations.

The demonstrations were peaceful, more festive and carnival-like and with few of the confrontations and violence of the riots that began exactly one week ago. Those mobilizations in the capital were an explosion of social hatred, particularly among the most marginalized sectors of the population and the youth. They began a rebellion that led to the government’s declaration of a state of emergency and provoked a military response that unleashed bullets and beatings in an effort to control it.

The chants of the demonstrators expressed in massive numbers their broad rejection of the government, with “Piñera Out!” standing as a repudiation of the state of emergency and the acts of repression we’ve seen for almost the entire week. Demonstrators also denounced the inheritances of the dictatorship—misery wages and pensions, precarious public health—and the general discontent with the “model” bequeathed by Pinochet. Valparaíso saw a rather different dynamic: more than 20,000 people advanced toward the Congress in the morning, despite very strong police repression. When some thousands arrived at the Congress doors, the parliamentarians were forced to flee.

The murderous and criminal government of Piñera and the right, in a completely hypocritical way, has sought to open a dialogue with the demonstrators and thus lure them into a trap. Piñera tweeted, “The massive, joyful, and peaceful march today, in which Chileans are asking for a more just and caring Chile, opens great paths for a hopeful future. We have all heard the message. We have all changed. With unity and God’s help, we will walk the road to a better Chile for all.” Piñera called out the military to use bullets and strike fear among the country’s poorest people, to control the most explosive elements challenging his government, and now he seeks dialogue with the massive demonstration of Chile’s citizens in an effort to divert it into a framework of deceptions and institutional traps.

We find this same hypocrisy in the establishment parties and the mass media. As the revolt unfolded, they fiercely criminalized it, especially the youth, but now they seek a dialogue with the peaceful demonstrations to insinuate them into the framework of the old Pinochet regime, distribute some crumbs so nothing really changes, and so—through their deceptions—sustain the inheritance of the dictatorship and the “model.”

They are preparing new traps and deceptions. Within the circles of power, they are preparing several ways to go: on the right, they are discussing shuffling the cabinet to form a “unity” cabinet with the opposition. Others advocate a path of doubling the stakes with more social measures that would surpass proposals they see as insufficient. But as Diario Financiero, which speaks for big business, has pointed out, they are ready only for new social measures that will deactivate the demonstrations through concessions that do not touch a single piece of the system the dictatorship installed, without bringing the “model” into play.

Piñera’s social dialogue trap, just as parliamentary negotiations with the parties of the old Concertación coalition (which held the presidency from the time military rule ended until Piñera won in 2010), all take the same approach: grant small concessions to avoid losing larger privileges, and work to divert us to toward the old institutions so everything really remains the same. If we do not use the power of the streets, with the general strike and the mobilizations, to throw Piñera out, the cursed inheritances of the dictatorship will endure—as will the suffering of the great majority in the form of hunger wages and pensions, growing debt, and private healthcare. Piñera and his government offer only traps, pure and simple. With social dialogue and parliamentary negotiations, there will be some changes, but the old regime will be sustained.

Others contend that if there are no such changes and the massive mobilizations continue over the next few days, it is possible it will force Piñera to resign, and that could lead to the possibility of a plebiscite being called, one the right-wing government would rig to ensure it serves the interests of big business and not resolve the suffering of the great majority of Chileans. At most, that would mean a Constituent Assembly that serves for a few years in the service of the wealthy, willing to spread a few crumbs around without challenging their basic interests.

Together with thousands of fighters, we of La Izquierda Diario and the Revolutionary Workers Party (PTR) believe we must be done with Piñera and call a Free and Sovereign Constituent Assembly through an active and fighting general strike, which will bring down Piñera and the entire old regime.

The Communist Party and the Frente Amplio (Broad Front) feed illusions that through “dialogue without exclusion,” parliamentary negotiations with the “opposition,” (non-binding) “plebiscites,” or in the next elections, we will be able to find a favorable way forward for the working class. This policy, though, which helps save Piñera today by not unleashing the power in the streets, contributes to allowing the regime and big business to “change” things so that nothing really changes, thus postponing the realization of our social and democratic aspirations.

The enormous power deployed this week—which has wracked the government and the old institutions, challenging the inheritance of the dictatorship by which the great majority suffer—is a force we must develop to impose a favorable outcome for the workers and the people.

What is now posed is the struggle to form assemblies, coordinating committees, and committees of struggle along a path other than the one the bureaucracies want, to develop the forces that impose a path that favors the country’s exploited and oppressed, that will allow us to progress in organizing the general strike to oust Piñera and impose a truly Free and Sovereign Constituent, so that it is the people who truly decide. Otherwise, it will be the old institutions making the same decisions they always have, ones that maintain their privileges and business as usual.