Protests Erupt Across Afghanistan in Defiance of Taliban Rule

For the past three days, Afghans in at least four cities have taken to the streets to resist the return of the Taliban in protests led by women and youth. Though the protests are small, they signal a way out of a crisis created by U.S. imperialism that does not rely on local or foreign foes. 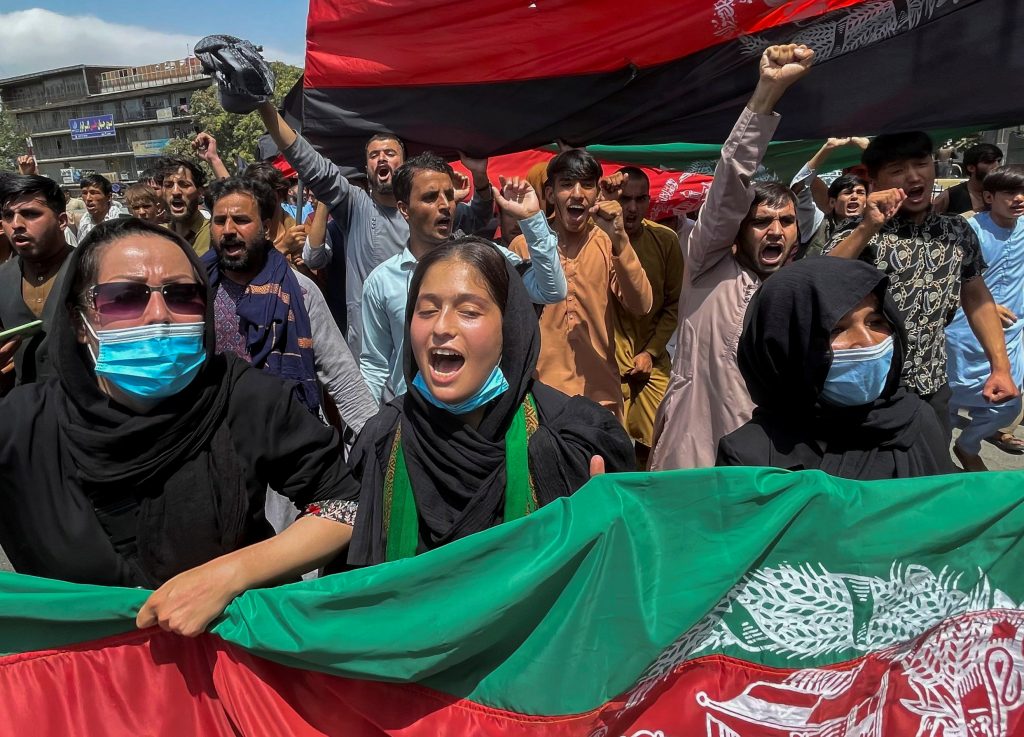 Yesterday, hundreds of protesters took to the streets in Asadabad, Khost, and Kabul (Afghanistan’s capital) to demonstrate against the Taliban as it attempts to consolidate its control across the country.

Despite the risks of repression at the hands of the brutal Taliban, videos show protesters marching along main streets and bearing large flags of the Afghan Republic. Several people have died so far and a curfew is being imposed in Khost. In many of the protests, women and youth can be seen on the frontlines.

These demonstrations come a day after protests broke out in Jalalabad, an important trade hub on the road between Kabul and the Pakistan border that fell to the Taliban just hours before Kabul. Taliban militants violently dispersed the mobilizations by opening fire on protesters and beating journalists. At least three people were killed and over a dozen people were injured.

On Tuesday, a group of women activists were among the first to protest after staging a rally in Kabul to demand the protection of women’s rights, including the right to work, education, and political participation. That same day, Afghans living in Isfahan, Iran, a country which is home to a sizable Afghan refugee population, also held anti-Taliban protests. Protests broke out across Iran, including in Tehran, Mashhad, and Qom.

Yesterday’s protests coincided with Afghan Independence Day which commemorates Afghanistan’s independence from British control in 1919. Crowds of protesters could be seen across social media chanting “Our flag, our identity” and “Long live Afghanistan” while waving red and green national flags in defiance of the Taliban’s regime. According to The New York Times, “There were even demonstrators waving the flag in Kandahar, the southern city that is considered the birthplace of the Taliban.”

All of this constitutes one of the first major challenges to the Taliban’s renewed rule which comes on the heels of U.S. imperialism’s humiliation in the longest war in its history. It’s a clear signal that the new government is not a welcome one and that the popular mandate the Taliban claims to have is not assured. In light of this social unrest, the Taliban has moved quickly and fiercely to suppress any discontent, despite its promises of more moderate rule as the new government attempts to stabilize the situation in Afghanistan and receive international recognition and support.

A country whose economy is almost completely reliant on international aid is now at risk of being cut off entirely. To add to all this chaos, 40 percent of the country’s crops were lost to a recent drought. The Afghan government’s failure to meet people’s basic needs helped fuel support for the Taliban; the result, however, is that the Taliban now faces an even deeper humanitarian and political crisis, paving the way for more mobilizations from below.

Meanwhile, the Northern Alliance, a coalition of militia groups led by Tajiks who were allied with U.S. imperialism during the 2001 invasion, are struggling to mount an opposition force against the Taliban. At the same time, members of the deposed government, such as First Vice President Amrullah Saleh (who claims to be the country’s rightful president) and Defense Minister Gen. Bismillah Mohammadi, are trying to rally their own opposition to the Taliban. So far these efforts seem ineffective against a Taliban that took control over Afghanistan in a matter of days with little resistance from Afghan forces.

In many ways, the outlook seems bleak for the Afghan people who have suffered under foriegn interference for decades and are entering their second experience with the oppressive Taliban. Terrifying scenes like parents who are handing over infants to U.S. soldiers fleeing Kabul airport or the recent news that a 17-year old soccer player from Afghanistan’s national youth soccer team was among the Afghans who died falling from a U.S. evacuation plane underscore the desperation among Afghans.

The dire situation faced by many Afghans is compounded by the timid efforts of Western powers, including the United States, to take in Afghan refugees for fears of a social backlash among right-wing sectors, in keeping with the nationalistic and xenophobic immigration policies of administrations like that of Joe Biden’s.

Despite this harrowing situation, the scenario remains open and the recent protests are a promising sign that Afghans are willing to confront the Taliban. While G7 countries talk of a “unified international response” to address the humanitarian crisis that’s unfolding in Afghanistan, the only international response that can serve the Afghan masses is solidarity from other popular sectors in the region engaged in struggle, like the Iranian oil workers who are on strike, or the Palestianian youth who defied Israeli occupation by organizing mobilizations and a historic general strike.

In a country where the average age of the population is 18 and the question of women’s oppression looms large, the youth and women who have already engaged in small-scale protests are leading the fight for their futures. Carrying this struggle forward depends on encouraging other social sectors that are particularly vulnerable to Taliban rule, such as the Hazaras, to join them and unify their struggles.

There are encouraging signs that there can be a way out of this crisis that does not depend on the interests of bipartisan U.S. imperialism, which has shown its true face after decades of intervention in the region, nor on the other regional powers vying for influence over Afghanistan like China, Russia, or Iran. The workers and oppressed in Afghanistan can pose an alternative to not only the Taliban, but other local bourgeois forces that cannot resolve the structural problems the country faces and will capitulate to imperialist interests.