At yesterday’s Queer Liberation March for Black Lives & Against Police Brutality, the second annual march of the Reclaim Pride Coalition, cops engaged in the usual brutal oppression of protests with renewed vigor. In contrast to their behavior at the corporatized Heritage of Pride parade, in which cops march side by side with protesters, the police reminded the LGBTQ+ community that they have no place in our movements. 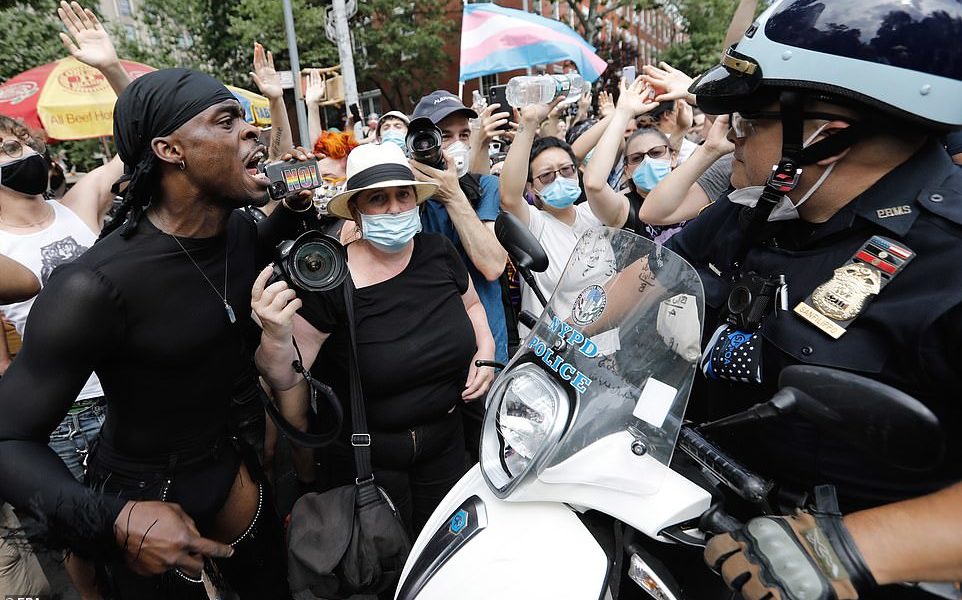 Thousands of LGBTQ+ people took to the streets in New York City today for the second annual Queer Liberation March, organized by the Reclaim Pride Coalition. The Coalition had originally planned to hold virtual programming this year due to the coronavirus pandemic, and the non-profit group Heritage of Pride had planned to host the city’s main parade remotely as well. However, when protests against police violence sprung up all over the globe after the murder of George Floyd last month, the Coalition decided they needed to be marching too, pandemic or no pandemic. They named this year’s march “The Queer Liberation March for Black Lives & Against Police Brutality.”

Last year, the Queer Liberation March was created as a counter to the corporatized Heritage of Pride March, where banks and insurance companies drape themselves in rainbow flags and pretend they support the queer community. Meanwhile, they hyper-exploit workers, destroy environments, and refuse loans and health insurance to the most poor and oppressed among us. They don’t belong at Pride. Even the police have been known to march at Pride, draping themselves in rainbows even as they have the blood of LGBTQ+ and other oppressed people on their hands. That’s why queer organizers are demanding that cops get out of pride; Stonewall was a riot against the cops.

The Queer Liberation March runs counter to this: No cops or corporations at Pride. No pride in rainbow capitalism. It intends to bring Pride back to its roots, and to reclaim Pride from the tentacles of corporate America.

The 2019 Queer Liberation March was full of protesters carrying signs on a wide range of political issues, from racism to environmentalism, from capitalism to global imperialism. All of these were also present this year, but in the midst of the Black Lives Matter protests, the march focused on police violence against Black people, with slogans like “Black Trans Lives Matter,” “Defund the Police,” and “Disarm the Police.” The official stance of the march calls on New York City to cut the NYPD’s budget by at least 50 percent.

Marchers first gathered at Foley Square and then set off around 1:30, passing by the Occupy City Hall encampment before turning uptown and heading to the Stonewall Inn. After pausing for a time at Stonewall to rest and celebrate, the March continued on to Washington Square Park, where a rally was scheduled. Police presence had seemed fairly minimal at the beginning of the March, with officers standing along the sides of the stream of protesters in small groups. Protesters chanted, “Quit your job!” as they walked by.

However, several streets around Stonewall were blocked by police barricades, and shortly after marchers arrived at Washington Square Park, NYPD officers erupted into unprovoked violence.

So far there have been confirmed reports of protesters getting pepper sprayed, rumors of tear gas, and a currently unknown number of arrests. NBC caught on video one NYPD officer violently pushing someone off of their bike, and several videos posted to Twitter show police — usually not wearing masks — shoving and shouting at protesters. In one case, eyewitnesses reported that police had been trying to arrest two people for graffiti and began pepper spraying the protesters who tried to intervene. In another, protesters chanted “Who do you protect? Who do you serve?” while police pushed their way into the crowd.

On the 50th Anniversary of #PrideMarch and the 51st Anniversary of Stonewall, NYC celebrates the Black, trans activists who built the movement and continue to lead today.#Pridehttps://t.co/D2FJy0lRoh

Yesterday’s events are a prime example of both why cops don’t belong in Pride and how support for the movement from government leaders is always conditional, always predicated on political expediency and maintaining the status quo.

Whatever DeBlasio’s personal feelings about LGBTQ+ people, his ongoing support for the NYPD shows that he is no ally. LGBTQ+ people are disproportionately victims of police violence and incarceration, and last year, trans woman Layleen Polanco Xtravaganza died in jail on Rikers Island after guards refused to provide her with medical care during a seizure. Only a month later, DeBlasio “vowed to protect” trans people by announcing a monument for Marsha P. Johnson and Sylvia Rivera. While monuments to LGBTQ+ history are certainly a good thing, such a monument does not fix or even mitigate any of the problems that led to Polanco’s death. Today, despite his tweets, DeBlasio showed exactly how much he really cares about LGBTQ+ people by sending the police after them yet again.

As one of the chants ringing through Greenwich Village at the second annual Queer Liberation March proclaimed: “We don’t buy it! Stonewall was a riot!”