Inspired by similar experiences in other Spanish-speaking countries led by La Izquierda Diario, an international digital network of socialist news and politics, we launched Révolution Permanente in French on June 9, 2015. A year later, our bet has been won and new horizons await us. 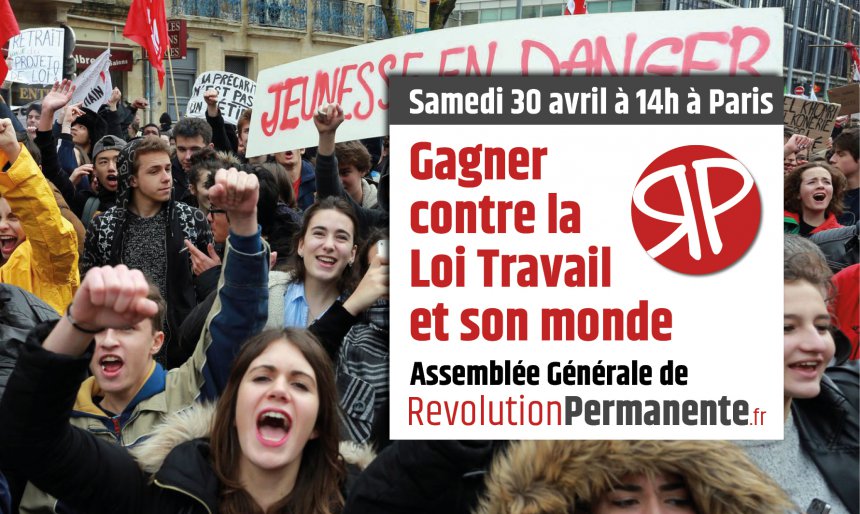 We launched Révolution Permanente (RP) on two premises. First, we saw a general absence of the point of view of the exploited and oppressed in the news, as well as a scarcity of far-left analyses that could compete with France’s dominant mainstream media—the docile mouthpieces of big business and government. Second, we faced the reality that reactionaries of all stripes were comfortably utilizing modern-day communication tools offered by the internet in order to spread their lies and putrid ideas.

We had to reverse this trend with an ambitious plan, but how? By forging a tool that was up for the task—one that would be at the daily service of working-class struggles and to give a voice to all those who are put down and made invisible by dominant ideology, to provide an outlet that could become their own. Clearly, a lot remains to be done. But the road traveled since last June demonstrates our project’s relevance as well as its enormous potential.

Relying solely on the engagement of its militants, the RP has imposed itself throughout the year as a major source of political news nationwide, regardless of the statistical tools used. It has become the top far-left website in France and has gained international recognition, notably mentioned in renowned left publications and media such as the New Left Review.

With an average of 250,000 visits per month, over 3,000 published articles in eight sections, and hundreds of videos, our readership has grown exponentially and exceeded our own expectations. In May 2016, the site had over 600,000 visits. The RP Facebook page generates several million interactions in the space of a few days, which has been the case at several moments since the beginning of the protest movement against the French government’s proposed labor reforms.

Leninism 2.0: At the heart of the movement against labor reforms and police repression

This is certainly not due to chance. Since its creation, RP has sought to denounce poor working conditions (particularly standing with the Paris hospital workers who went on strike in Summer 2015) and notably the suicides that they lead to among workers. RP has condemned the authoritarian and anti-democratic swing of the French government, such as the prolonged state of emergency since the November 13 attacks.

But it has been within the context of the growing student and worker protest movement against the labor reforms that RP was able to prove its value, thanks to the involvement of its militants in the protests as an alternative source of information and an independent mouthpiece for the movement. Besides many articles on questions concerning international affairs, gender and sexuality, theoretical and strategic debates, through daily coverage of the protest movement over the last three months, the RP has begun to impose itself in the political and media terrain: from the high school and college student protests to the strikes in the refineries and the national rail company, via Nuit Debout (“Night on its feet”) where we organized numerous debates, and of course thanks to our continuous denunciation of police repression in all its forms.

As promising as this first year has been, we are well aware that the adventure has just begun. But it has shown us what RP can become: first, a daily news website competing on equal footing with mainstream media outlets, delivering political analysis, debate, and news from the correct side of the barricade in direct connection with those who are fighting.
And second, on this basis, the RP can become an instrument capable of influencing the reality of these struggles on a major scale—an independent organization and independent politics of the exploited and oppressed against the exploiters and oppressors.

New and exciting challenges ahead: Inform, orient, organize on a new scale

Thus, Révolution Permanente will need to stay in direct resonance with the major political phenomena of our time, particularly with the generation that is now forging a new political experience in the heat of the current protest movement so as to prolong and consolidate their energy and combativeness against the capitalist system—without, of course, falling into the trap of reformist or electoralist shortcuts that will certainly not cease from sprouting up in the weeks and months to come.

Without succumbing—as is the risk in difficult periods of class struggle and because these struggles never follow a straight and narrow path or a pre-written script—to demoralization or defeatism, which the “left of the left” and far left, in their historically deplorable condition, when confronted with the war machines of our enemies, have only maintained in recent times.

Without ever losing confidence in the collective strength of the exploited and oppressed because it is only thanks to these forces and their transformative capabilities that another world is possible—one other than that of Hollande’s labor reforms, police repression and what they represent.

To continue on this path, we must be in step with the most advanced political trends of the left and the working-class and youth movements. We must be equally against the tides when faced with an inevitable retreat. Besides planned technical and aesthetic developments to come, we invite all our readers not only to share our articles widely and utilize them to the fullest extent in their daily lives, but also to send us contributions and testimonies—and for the most convinced among our readers, to join us. Of course all our readers are invited to share their vision and suggestions for the site with us.

We invite you to contact us with your ideas and collaboration, to join the numerous correspondents with RP—workers, university and high school students, the precariously employed, victims of police repression, racism and sexism, intellectuals and artists. We will continue to take on the challenge that we set out for a year ago. After our success so far, we are more determined than ever to continue on an even greater scale.

Original article published in French on Révolution Permanente on June 10, 2016.