Trotskyists in Chile have won the democratic right to stand as candidates next April for the convention that will draft a new constitution. They will bring to the gathering an independent revolutionary working-class perspective missing from the large Left parties that have been collaborating with the bourgeois regime so it can hold on to power. 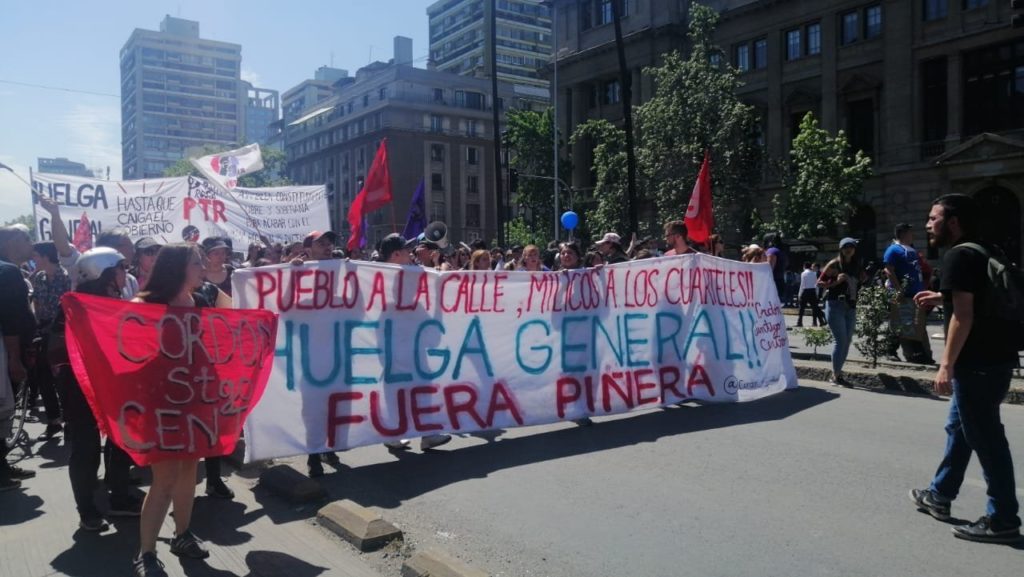 With Chileans’ overwhelming vote on October 25 in favor of drafting a new constitution to replace the country’s current constitution inherited from the Pinochet dictatorship, the next stage of the process begins — and will include revolutionary voices.

Voters were also asked to decide whether the convention to draft the new constitution will be “constitutional,” with every delegate to the convention elected in a vote to take place next April, or “mixed,” with half the delegates chosen by parliament. The choice, again, was overwhelming: Chileans rejected the government’s attempt to impose its own delegates. That has created an opening for the Partido de Trabajadores Revolucionarios (PTR, Revolutionary Workers Party), our comrades responsible for our sister publication La Izquierda Diario.

On October 23, the PTR announced it had obtained the signatures needed to obtain legal status for candidacies for delegates in the Santiago metropolitan region, adding the capital city to the other regions of Valparaíso, Antofagasta, Araucanía, Arica and Parinacota, Los Lagos, and Los Ríos where the PTR will be certified.

This means that the PTR will be the only political organization of the Left in Chile with that legal status that stands for the genuine independence of the working class. It means further that the PTR comrades will confront directly two of the biggest forces on the Left that carry significant weight among the Chilean masses and that have both been collaborating with the bourgeois government since the country erupted in rebellion in October 2019.

The Partido Comunista de Chile (PC, Communist Party of Chile) and the Frente Amplio (Broad Front) — those two other groups — have been obstacles in Chile in the entire period leading up to the national referendum. They promise to be obstacles going forward, too.

When the Chilean masses took to the streets in October 2019, the PC and the Frente Amplio refused to call for a general strike to throw out President Sebastián Piñera, and used their influence within the trade union leadership to hold back workers’ mobilizations. They joined the “kitchen cabinet” for secret negotiations to put an end to the “unrest,” at the behest of the government — a government that functions based on the constitution of the Pinochet dictatorship of three decades ago. And they advocated for a “constituent process” that would maintain the old institutions of the regime.

The PTR, by contrast, was on the front lines of the struggle in the streets. In Antofagasta, our comrades were central to creating and leading the Emergency and Protection Committee that set an example for the entire country of how rank-and-file unionists and activists can build their own bodies of democratic self-organization to counter the union and social bureaucracies of the Social Unity led by the PC and Frente Amplio.

Whereas the PC and Frente Amplio has been sowing illusions about the “constituent process” they have advocated, which would simply recycle old powers, the PTR has raised from the beginning the demand for a truly democratic “Free and Sovereign Constituent Assembly” that will throw out Piñera and liquidate the powers of the old institutions of the regime inherited from the dictatorship. As Pablo Torres of the PTR has written,

The PTR has been promoting the demand for a Free and Sovereign Constituent Assembly along with workers, youth, and women across Chile. Dauno Tótoro, a PTR leader, explained how the PTR approached the national referendum on October 25, stating that the party called for a yes vote for a new constitution, “because we don’t want a Pinochet constitution,” but called for voters to “annul” their ballots on the second question “by marking ‘Free and Sovereign Constituent Assembly and Out with Piñera Out’ — because it is more necessary than ever to raise the flag of rebellion and set out again on the path that opened the opened the general strike of November 12 [2019].”

The PC and Frente Amplio aim to blockade that path, and in essence allow the same bourgeois politicians who have been running Chile since Pinochet’s fall in 1990 to establish a new constitution that maintains their rule, which has impoverished huge sectors of the Chilean population as the regime has brutally and murderously repressed any opposition. Joseffe Cáceres, a cleaning worker, union leader at the Metropolitan University of Educational Sciences (UMCE), and a national spokesperson for the women’s group Pan y Rosas, spelled out the PTR’s perspective: “We propose that to achieve our demands for bread, health, and work, we should again mobilize and take up the program of popular rebellion.” She articulated a minimum wage, workers’ control over natural resources, an end to the pauperizing pension system, and that parliamentarian salaries should be the same as teachers. She called further for employing the full strength of workers in healthcare, education, mining, the ports, industries, and services, along with students and residents of the towns and cities, to build an anticapitalist and socialist alternative.

It is urgent that we reconstitute the self-organization of the committees and assemblies that developed during the rebellion. We must use these forces in our workplaces for an independent alternative of the workers, not of the bosses.

Dauno Tótoro added that the movement must also fight for an end to the repression, and, referring to a cop killing less than two weeks ago in the municipality of Pedro Aguirre Cerda, added, “We demand the trial and punishment of those politically and materially responsible for the murder of Aníbal Villarroel and all human rights violations.”

The PRT’s anticapitalist workers’ alternative to the process the Chilean regime is desperate to control, coupled with the renewed mobilization of the masses in the streets, points the way forward for ousting the institutions inherited from the Pinochet dictatorship once and for all — and setting Chile on the path to socialism.