Rosa Luxemburg at 150: No “Harmless Icon”

Rosa Luxemburg was born on March 5, 1871. She is often presented as a pacifist, a democrat, and an opponent of the Russian Revolution. None of this is true. She was a revolutionary communist. 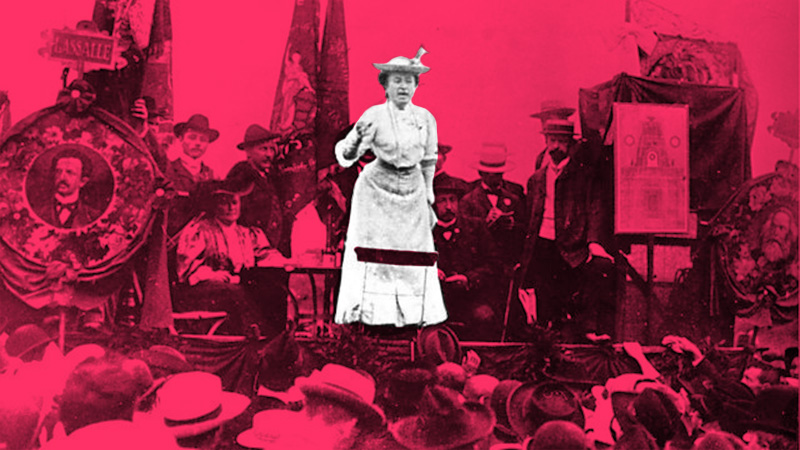 100 years ago, V.I. Lenin wrote about how the ruling classes appropriate the names of dead revolutionaries:

During the lifetime of great revolutionaries, the oppressing classes constantly hounded them, received their theories with the most savage malice, the most furious hatred and the most unscrupulous campaigns of lies and slander. After their death, attempts are made to convert them into harmless icons, to canonize them, so to say, and to hallow their names to a certain extent for the “consolation” of the oppressed classes and with the object of duping the latter, while at the same time robbing the revolutionary theory of its substance, blunting its revolutionary edge and vulgarizing it.

This has happened to many dead revolutionaries. But no one has suffered worse than Rosa Luxemburg. Her great misfortune is that everyone simply loves her. Reformists praise her as a pacifist, a democrat, and an opponent of the Russian Revolution. It is true that she had an almost boundless love for working people, and also for animals of all kinds. But this was matched by a burning hatred for all exploiters and oppressors — who hated her right back. Luxemburg was thrown into prison by both the Russian Czar and the German Kaiser. She was eventually murdered by reformists seeking to save capitalism from revolution.

But today, her name and countenance are misused by reformists who administer capitalism — who, if confronted by a proletarian revolutionary of Luxemburg’s calibre today, would most likely call the police. So for the 150th anniversary of her birth, we want to celebrate Luxemburg’s revolutionary legacy. This includes two books that we highly recommend. Precisely because we do not see Luxemburg as a “harmless icon,” we want to study her political legacy, including all her strengths and weaknesses. We are honoring her on her birthday by republishing critical texts by Leon Trotsky and Walter Held. Finally, we have collected a number of articles that have appeared on Left Voice in past years.

To all the reformists who hold up Rosa Luxemburg as a supposed support of “left-wing” and “progressive” bourgeois governments, we dedicate a quote from the end of her life:

The day and the hour belongs to the dictatorship of the proletariat and to socialism. Whoever opposes the armored car of socialist revolution will end up lying on the ground with broken limbs. (“Ein gewagtes Spiel,” Our translation)

Books on Rosa’s Life and Work

Red Rosa, a graphic novel by Kate Evans, published in 2015 by Verso

Rosa Luxemburg, a biography by Paul Frölich, published most recently in English in 2010 by Haymarket

Both books have been published in Spanish by Ediciones IPS in Argentina, a publisher linked to our sister site La Izquierda Diario: La Rosa Roja and Rosa Luxemburgo: Vida y Obra.

Trotsky defends the revolutionary legacy of Rosa Luxemburg against attacks by Stalin in 1932. Trotsky details the fight Luxemburg put up against the reformist leadership of the Social Democratic Party of Germany.

“The German Left and Bolshevism,” by Walter Held

The German Trotskyist Walter Held discusses the differences in the views of Lenin and Luxemburg on the role and tasks of a vanguard party, as well as the revolutionary strategy that is common to them both.

“The Politics of Red Rosa,” by Josefina L. Martínez

On January 15, 1919, a group of Freikorps (German paramilitaries) murdered Rosa Luxemburg and Karl Liebknecht. What they could not kill was the powerful ideas of the “red rose” of the world proletariat, Rosa Luxemburg.

“Was Rosa Luxemburg an Opponent of the Russian Revolution?” by Nathaniel Flakin

Rosa Luxemburg is often presented as an opponent of the Russian Revolution, but this is a deliberate misunderstanding. In fact, she was no more and no less than a critical Bolshevik.

“Berlin has made the most unfavourable impression on me.” In 1898, Rosa Luxemburg arrived in the capital of the German Empire. She describes it in a letter as: “cold, tasteless, massive – a real barracks.” Here is where she spent her time in Berlin.

“100 Years Ago in Berlin: German Revolutionaries Step on the Grass”

The German Revolution, which began in November 1918, represented the culmination of Rosa Luxemburg’s life. When the insurrection reached Berlin, she was still in prison. But she arrived home the next day and became the leading figure of the working class. This three-part article looks at the revolution.