On July 20, unions and their members from around the country signed on to participate in the “Strike for Black Lives” led by the Service Employees International Union (SEIU). In theory, this is a great step forward, but as a member of the Committee of Interns and Residents (CIR), which is part of SEIU, I have to ask, is SEIU prepared to actually strike? 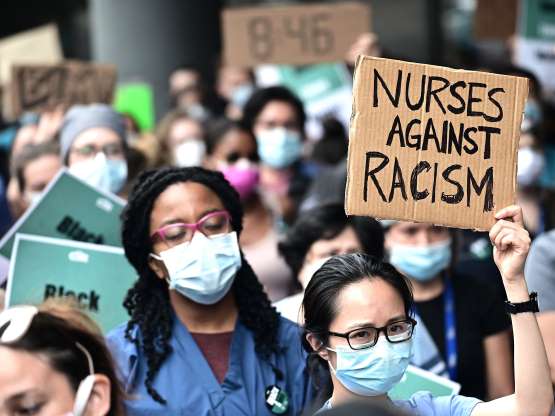 We want to fight. Workers throughout the country have been involved in the movements on the streets for weeks. In our unions, we have marched as contingents from coast to coast and in pretty much every city. There’s been heroism with transit workers refusing to transport political prisoners and even some strikes. And now, there’s a growing movement to drop the cops from our unions, from whole labor federations like in the King County Labor Council, to the Writers Guild, to even the efforts in the SEIU.

We rank and filers have not been sitting on the sidelines. But, for the most part, our union leaderships have. They have published statements of solidarity, when we wanted to mobilize. They have called to down tools for eight minutes and 46 seconds, when we wanted to be on the streets. When we demand to remove the police from our unions, they say it’s a “tough conversation” or that it’s better to have them in the house of labor. Our SEIU has now called a “Strike for Black Lives” for July 20. This is a start, but what does it mean?

It definitely doesn’t mean that the union has been preparing for a strike of hundreds of thousands of members, plus additional millions from the other unions that have signed on, including the Teamsters, UFCW, AFT, CWA, ATU and more. And it definitely doesn’t mean that the strategic might of the working class to shut down capitalism will be let loose in the fight against racism and police violence.

Instead, what it does mean is that in a dozen or so cities, stage-managed walkouts of handfuls of members will be met with media presence, and there’ll probably be more cameras than “striking” workers. The vast majority of our members won’t even know about the “strike” called in their name! Afterwards, it will be declared a success because it “raised awareness,” but the reality will be there was never a true “strike for Black Lives.” SEIU is, of course, notorious for this kind of media stunt.

A more skeptical member might even think that the publicity event is more of a pressure release for burgeoning militancy generally, a way to give the appearance of “doing something” without actually threatening those in power. Today, the growing slogan to “Drop the Cops” stands to threaten union protection of the militarized police. On a greater level, it calls to question the role of policing in our society, threatening the system of police who act as guard dogs of capital. Despite the growth in militancy, certain locals do all they can to deflect around the question, as they are hesitant to disagree with SEIU nationally. This makes a release in the form of this “strike” even more necessary as rank and file are becoming more and more mobilized.  That said, if leadership is feeling the pressure of the rank and file to do something, all the better. Now, we must push them to commit greater resources to this fight. We don’t need more “marches on the media,” but instead we need the real deal.

A bona fide “strike for Black Lives” would be so much more. The SEIU leadership are right to point out the importance of the anti-racist struggle in the workers’ movement. They are right to invoke the power of a strike, but in their cynicism, they weaken the concept. Mass political strikes are not so much called, as much as they occur under specific conditions, such as how the Minneapolis movement spread throughout the country in days. This isn’t to say that we wait with folded arms, but that we understand the importance of genuine preparation. If we slog through organizing in our workplaces and communities, we could stop the system, put millions on the streets in protest, and, most importantly, show the power of workers against racism. And this organizing will take more than setting a date and calling the press. It will, in generalities, require the slow work of building committees, calling assemblies in workplaces, coordinating across industries, and countless other ways of creating the structures necessary for a strike. And though it will be hard work, support of such an action could be massive.

Covid-19 is still ravaging the country. Tens of millions are unemployed, tens of millions are facing the possibility of eviction, teachers across the country are being forced into unsafe schools, and budget cuts coming down the pipeline will see the layoffs of even more workers. In fewer words, millions are being immiserated by the triple crises of Covid, the economy, and police terror. And it shouldn’t be forgotten that Black people bear the brunt of these crises, with higher fatality rates of coronavirus, consistently higher unemployment rates, and consistently lower wages. Furthermore, since Black workers make up a disproportionate number of public sector workers, they will also be facing austerity attacks on masse. This all while the rich and their corporations are bailed out once again. We know that hardships alone do not lead to unity and in many cases lead to its opposite, but if we build strongly, those millions could be organized with us in a much stronger labor movement.

And you better believe that if we organize this strike, it wouldn’t be for the tepid and nonsensical demands outlined by “Strike for Black Lives.” Elected officials and corporations will never “rewrite the rules and reimagine our economy and democracy so that Black communities can thrive” or “take immediate action to dismantle racism, white supremacy, and economic exploitation wherever it exists…” The rules are in place for them! Why would they rewrite them? As for corporations dismantling racism, white supremacy, and economic exploitation? Well, like Malcolm X said “You can’t have capitalism without racism.” Racism is necessary to capitalism, because dividing workers is necessary for the rich and powerful. Black struggle is class struggle.

Instead, as examples, we could demand reparations, the release of prisoners locked up by the racist legal system, the extension of better unemployment benefits, the cancelation of rent, and the ending of evictions. These concrete demands could rally more people than the SEIU vagaries.

So, thanks to the leadership for calling a “strike.” But we must prepare a real one. It probably won’t be July 20, but we could open our union halls to the movement for assemblies in which our coworkers and the community can come together. We could fight to remove police, ICE, and other bodies of repression from our schools, hospitals, and transit systems. We could do many things, but we have to do more than another fake “Strike for Black Lives.”