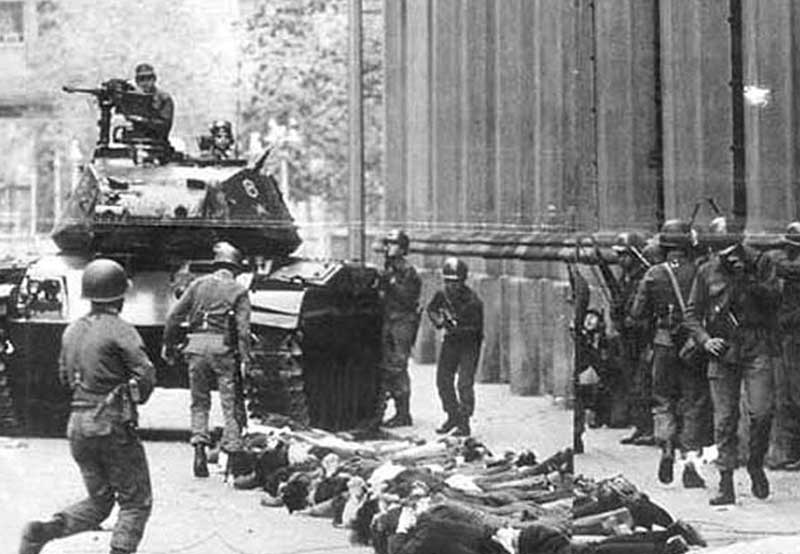 In the early afternoon of September 11, 1973, the Chilean Air Force began bombing La Moneda, the presidential palace in the center of Santiago. The military, with support from the CIA, had seized power across the country. President Salvador Allende was soon dead—coup leaders claimed he had committed suicide. In the following months and years, the new military dictatorship under general Augusto Pinochet massacred 3,000 leftists, and forced tens of thousands into exile. Under the tutelage of Milton Friedman, Pinochet introduced a brutal neoliberal regime.

Chile’s September 11 marked the end of an experiment that had begun three years earlier when Allende was elected president. As a democratic socialist, he promised a peaceful and democratic “transition towards socialism” in the framework of the country’s institutions. The governing coalition, Popular Unity, carried out nationalizations of copper mines and the telecommunications and chemical industries, hurting U.S. corporations. Both Chilean and American capitalists did everything they could to sabotage the economy, and encourage fascist terror.

But Allende remained unconcerned about the danger of a coup. Chile had a long tradition of bourgeois democracy, and Allende assumed that the military would respect the actions of a democratically elected government. On June 29, 1973, just a few months before the coup, an army unit surrounded La Moneda with tanks in an attempt to seize power. After this Tanquetazo was defeated by loyalist troops, many Chilean workers realized that the time had come to arm themselves and take power away from the capitalists.

Allende, however, told them to trust the officers’ corps. After June 29, he said in a speech to the nation: “trust your government. Go home and kiss your wives and children in the name of Chile.” He even named Pinochet as commander-in-chief, hoping to keep the loyalty of that part of the military. Allende also approved an Arms Control Law which allowed the military to disarm workers.

Even on September 11, Allende apparently rejected offers to flee from the center of Santiago and organize resistance across the country. His sincere desire was to avoid a civil war. All this meant in practice, however, was that the inevitable civil war was entirely one sided: The army could massacre workers and leftists who had been disarmed by Allende.

There had been an alternative: workers had been organizing Cordones Industriales (Industrial Belts). These were assemblies that brought together delegates from factories. As they expressed in a letter to Allende, they demanded immediate measures against the capitalists’ sabotage—like “the immediate requisition of trucks by the mass organizations.” This would have been part of an offensive against the capitalists and their servants from the military. But Allende remained loyal to the institutions of the capitalist state.

The lessons of Allende’s fall are more relevant now than at any time in the last 40 years—and not just because U.S. fascists have started using Free Helicopter Rides memes, a reference to Pinochet’s secret service throwing opponents out of helicopters over the ocean. No, this is relevant because today’s reformists have been drawing comparisons between U.S. Senator Bernie Sanders’ call for a “political revolution” and Allende’s program—even though Allende’s program was far more radical.

Several months ago, Jacobin suggested that Bernie Sanders and his supporters could learn a lot from Allende. But the lessons that today’s reformists draw are completely wrong. They believe a hypothetical Sanders government should “calibrate the state’s actions” according to “what the working class is willing to fight for.” The irony is that the Chilean workers showed an incredible energy and creativity in the struggle for socialism. It was Allende’s government who held them back, due to its deference to parliamentary and legal norms.

Reformists—both in Chile 50 years ago and in the U.S. today—hope to avoid a confrontation with the capitalist state at all costs. Since the state exists to protect the interests of capital, a “socialist” government will sooner or later have to bend to the capitalists’ will. For this, they can employ “legal” pressure via capital flight, judicial rulings, media campaigns, etc. And if this fails, there are always “extralegal” means like coups.

Bernie Sanders has already made clear that he has no interest in a real confrontation with the capitalists. That is why he supports the free market, the U.S. military, the F35 and “strong borders.” Sanders has already learned the lesson that he needs to work with the bourgeoisie, giving up any possibility of real socialism.

Sanders’ supporters, however, can learn the opposite lesson: if we want to end this system of crises, wars, repression, and environmental destruction, we can’t hope for a “democratic” transformation of the capitalists’ state. We need a revolution to break the power of the capitalists. The task of socialists it to prepare for that.