Shot in the Back by an L.A. Sheriff

18-year-old Andrés Guardado was shot in the back by the Los Angeles Sheriff’s Department last month. On Monday, protestors continued their call for the arrest of the sheriffs responsible. 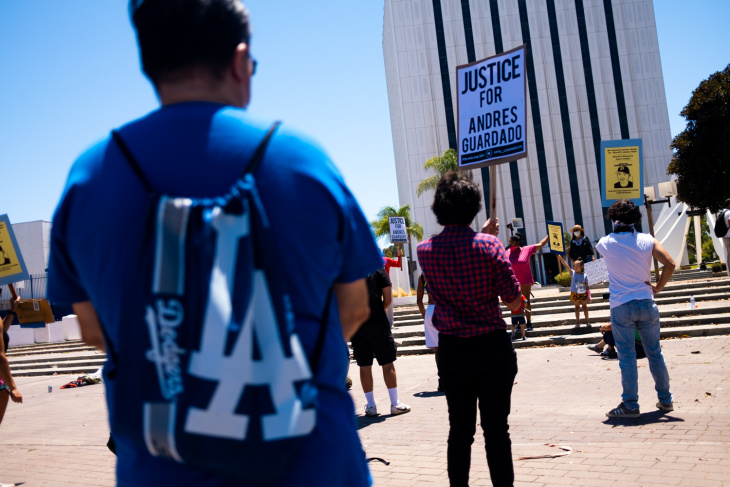 On Monday, I was present at the protests calling for justice for Andrés Guardado. The 18-year-old boy was brutally murdered by the Los Angeles Sheriff’s Department near West Compton on June 18. Andrés was shot five times in the back while he was lying on his stomach by Deputy Sheriff Miguel Vega. As of the time of this writing, Vega remains on the street patrolling.

The LASD claims Andrés was armed — but this must be emphatically repudiated. After shooting Andres in the back, the LASD destroyed all evidence of the crime by breaking a security camera and confiscating the DVR device with the footage. I saw this first hand when I went to pay my respects at the place where Andres was murdered two weeks ago.

At the protest, we demanded:

There were also calls for the resignation of L.A. District Attorney Jackey Lacey, as many protesters very reasonably feel that she has abdicated her responsibility.

After a two-hour rally with speakers from community organizations, workers’ unions, and various socialist organizations such as Socialist Alternative, the official event ended and about 100 people went to protest in front of the L.A. Sheriffs who barricaded roads nearby. They chanted “F**k 12,” “Defund the police,” and other slogans to express their anger and disgust. People shouted profanity at officers — it was cacophonous and raucous.

The crowd was mostly Latino / Indigenous, and African American, but there were also a few Asian-Americans present — one held the classic sign reading “Yellow Peril Supports Black Power.” At one moment, protestors began to share their often violent or dehumanizing encounters with police.

This visibly bothered the police and they began to call for backup. At one point, we were outnumbered nearly two to one. They were armed with teargas and rubber bullets. One was carrying a Colt M4 rifle — a demonstrator who identified himself as a retired U.S. Marine exclaimed: “I carried that weapon in Afghanistan!”

Some young people joined the protest serendipitously. They shared with me their experience with police harassment in their schools and even helped pass out water to demonstrators. The demonstration lasted approximately two hours on the corner of Willowbrook and Compton. We dispersed without being hit, gassed, or pepper sprayed by LASD.