Kshama Sawant, the nation’s only openly socialist city council member was re-elected last Tuesday with more than 52% of the vote in the city of Seattle. Sawant, a member of Socialist Alternative, has held the council seat since 2013. 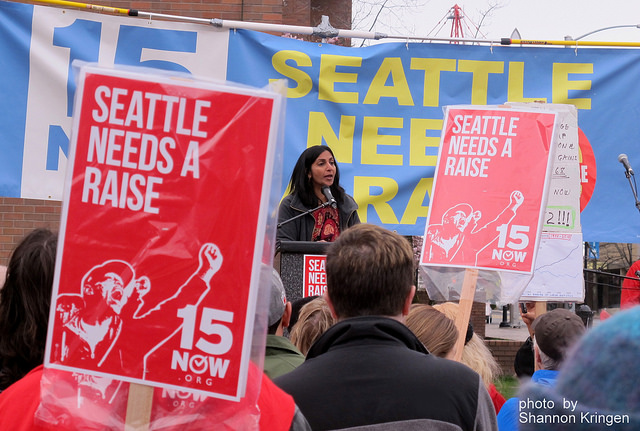 Sawant was opposed in the race by Democrat Pamela Banks, president of the Urban League of Metropolitan Seattle. Corporate PACs spent tens of thousands in the campaign to defeat Sawant and Banks received the backing of the Seattle Chamber of Commerce and major corporations like Amazon.com. Banks continually attacked Sawant during the campaign for participating in street protests and for criticizing Barack Obama and the Democratic Party establishment.

Sawant was first elected in 2013, and became the first socialist on the city council in more than 100 years. Her candidacy was propelled by the demand of a $15-an-hour minimum wage for the city. Scoffed at as an impossibility at the time by the media and corporate politicians, the demand was won soon after her election, albeitt with a timetable that won’t reach $15 until 2021, and various loopholes to make the bill more palatable to Seattle’s capitalist class. After Seattle’s minimum wage increase, Los Angeles and San Francisco also announced plans to raise their minimums to $15 an hour and this summer, the Democratic National Committee made a $15 minimum a part of their national platform.

As in 2013, Sawant’s victory demonstrates that, contrary to popular wisdom, socialists can win elections in the U.S., and that the Democrats can be defeated from the left. While refusing corporate contributions, Sawant was able to raise more than $500,000 for her campaign, a record amount in a Seattle city council race.

This time around, Sawant’s campaign focused on the crisis of affordable housing in Seattle, a city with skyrocketing rents and home prices. The median price of a single family home is now $575,000, more than double the average nationally. Her campaign demands included increased rent control, a Tenant’s Bill of Rights, and the construction of thousands of affordable apartment units.

Yet, rather than using Sawant’s seat to build an independent, working class movement, Socialist Alternative is supporting, with virtually no criticism, the candidacy of Bernie Sanders for president, and has repeated the absurd notion that he is leading a “political revolution”. In fact, as we have pointed out in this publication , Sanders aims to lead leftists, youth and combative workers back to the fold of the Democratic Party and corral any attempt at an independent movement, such as Occupy Wall Street or Black Lives Matter, that could challenge the status quo. Sanders has supported U.S. military interventions in Afghanistan and the former Yugoslavia, and has continued to vote in favor of U.S. military aid to the Israeli apartheid regime. And as Socialist Alternative admits, Sanders has promised to throw his support behind Hillary Clinton if she were to defeat him in the primaries.

Rather than campaigning for liberal career politicians like Sanders, an independent movement of workers and youth is needed which rejects all collaboration with the capitalist class. Sawants victory proves socialists can win elections. But election victories will be for naught if they lead to the cooptation and downfall of the movement.